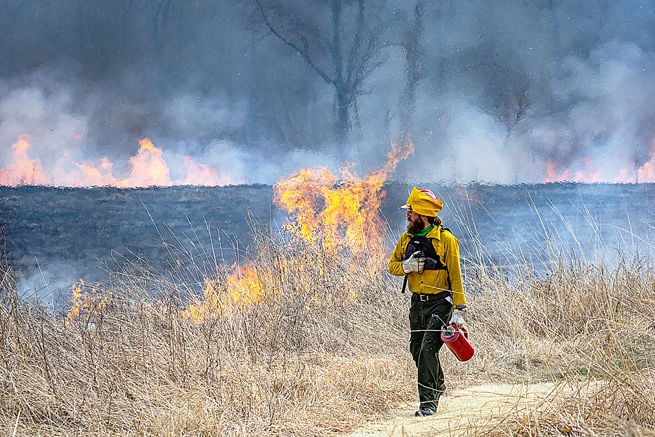 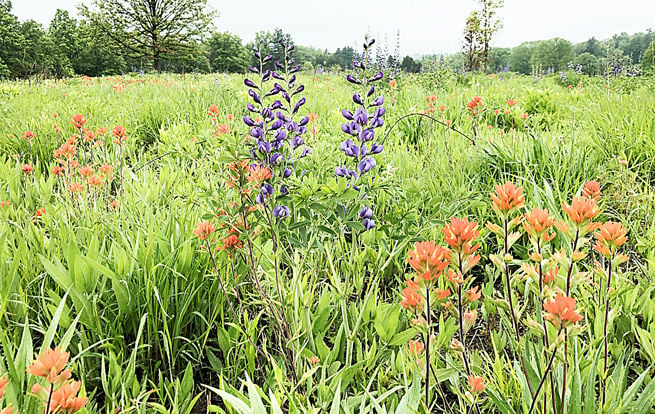 This prairie unit, above, near the Visitor Center at Shaw Nature Reserve in Gray Summit, was part of a prescribed burn conducted Feb. 19. Today the area is lush and vibrant with blue false indigo and Indian paintbrush blooming.

This prairie unit, above, near the Visitor Center at Shaw Nature Reserve in Gray Summit, was part of a prescribed burn conducted Feb. 19. Today the area is lush and vibrant with blue false indigo and Indian paintbrush blooming.

Green shoots of life were already beginning to emerge just a few weeks after the last prescribed burn of the dormant season at Shaw Nature Reserve in Gray Summit.

Now more than two months later, blue false indigo (Baptisia australis) and Indian paintbrush (Castilleja coccinea) have blossomed across the landscape, along with a diverse array of other plants that will flower in the summer and fall.

By June, signs of the fire may still be noticeable, but fading, while the benefits will continue to be more visible every day, said Michael Saxton, ecological restoration supervisor.

If you’re not familiar with prescribed burns, the concept can seem unnatural — burning the land to restore and encourage growth. But it’s just the opposite, said Saxton.

At Shaw, they use prescribed burns to help control invasive species and to maintain the open woodlands, which brings more light to the understory and encourages growth of a wide array of native plants.

“People have reservations about using fire, but here it’s not a scary thing, it’s necessary,” said Saxton. “We are creating habitat, enhancing habitat, we’re putting back the natural balance.

“Our natural areas of Missouri evolved with fire. There has been fire here forever. There were two primary ignition sources ­— lightning strikes and humans who used fire as a tool.

“The bison herds followed the fires,” he said. “They liked fresh green growth to eat. The herds would congregate in recently burned, recently greened areas. Native Americans knew this and used it. They also used fire to keep the landscape open.”

“Like in woodlands, without fire they get darker, denser, there are more trees, and the sun-loving plants on the forest floor get shaded out,” he explained.

People sometimes think Shaw’s use of prescribed burns is an attempt to recreate presettlement Missouri. But that’s not the goal, said Saxton.

“In an era of shifting and changing climate and invasive species running rampant, it is really important that we are thoughtful about these things. We want to build resiliency into these systems, and fire does that.”

Looking around the property today, the results are a vibrant and healthy landscape, said Saxton.

The woodland units, which have been burned every two or three years since 1995, are open, sunny and diverse with trees completely intact.

“Our trees here, our hickories, our oaks, they’re very fire tolerant,” said Saxton. “They have very thick bark and have evolved with fire.”

By contrast, maple trees have thin bark and are very fire sensitive.

Every year, Shaw conducts a number of prescribed burns during the dormant growing season. They typically begin in mid- to late-November and continue through early March.

The emergence of the spring flora is when they determine the burn season is over, said Saxton.

“We do rotational burning,” said Saxton. “Rarely do we burn the same unit every single year, and we would never burn all of a given habitat in a single year either. You want to leave unburned areas.”

Typically, Shaw burns between 600 and 900 acres a year. The amount is dependent on the weather.

There is a lot of preparation work involved in doing prescribed burns safely and correctly.

That prep work begins with firebreaks, or a gap in combustible fuel (like vegetation) that stops a fire from spreading.

At Shaw, they use their gravel roads, trails and natural elements like the river as firebreaks.

“We do a lot of mowing, especially in our prairie units,” said Saxton. “We knock down the fuels at the edges to give us an even wider buffer. For our woodland units, we do a lot of leaf blowing . . . but we also have to think carefully about our dead trees.

“Dead trees are great. We call them snags; and we want snags. They’re great habitat for any number of things, from fungi and microbes to insects and birds,” said Saxton. “We want standing dead trees . . . but we don’t always want them next to a firebreak, because they could catch fire, fall over the fire line and get fire outside of the line, or they can shoot embers over the line.”

So part of the firebreak prep work at Shaw involves removing dead trees or, if they want to keep the tree, removing the fuels around it so the tree won’t burn.

Another aspect of the prep work for prescribed fires involves the equipment.

“We load our pumper units,” said Saxton. “We have a couple of 200-gallon water delivery units, a 75-gallon unit, a 125-gallon unit and a couple of smaller units. We check them to make sure they are running smoothly.”

The burn team uses the pumper units in a few different ways.

“One way is to lay a wet line . . . preemptively wetting down fuels in front of the fire and behind the person who is igniting,” said Saxton. “We do suppression, knocking down and keeping it less intense on the edges, and we also just have the water there if it’s needed.”

In addition to prepping the land for a burn, Shaw also has to prep the people (staff and volunteers) who will be doing the work by making sure they get the proper training and certification.

Saxton noted that many people approach him about wanting to volunteer to help with prescribed burns, but the volunteers who are selected are ones that are known to the ecological restoration program and are familiar with the goals.

Shaw works with partners like the Missouri Department of Conservation, Missouri Parks Department and the Tyson Research Center to train its volunteers.

The number of staff and volunteers needed for a prescribed burn varies depending on the size of the unit.

“Having too many people helping can be hazardous too,” said Saxton. “We want the right amount and the right kind of people.”

For the burn shown here, there were 14 people on the line — seven staff and seven volunteers.

Weather is the biggest factor to consider in conducting a prescribed burn, said Saxton. It is the most variable.

Rain can be a concern, more so for woodland units.

“The main things for us are relative humidity, wind speed and wind direction,” he said. “Those together give us a measure of smoke lift. We want to know what the ventilation rate is. That will tell us how well our smoke is going to lift and disperse. That’s really important for us.”

“If there’s a wind 8 to 10 miles per hour out of the west, I know what it’s going to be. I can have a plan. But if it’s a light and variable wind, that’s not good, because it can go anywhere.

“Topography and wind, that’s what is moving the fire.”

He used a home bonfire as an example. When there’s no wind, it tends to be smoky, he commented, but if there’s a nice wind, the bonfire puts up less smoke, because it is combusting really efficiently.

“When you get better combustion, you get less smoke,” said Saxton.

Shaw coordinates all of its burns with the Boles and Pacific fire protection districts, notifying them every time they conduct a prescribed burn.

But the fear of a fire getting out of the set boundaries is less of a concern than managing the smoke that is generated by the fire, said Saxton.

“Smoke management is a huge concern for us,” he said. “It’s almost more important.”

With the firebreaks like the Meramec River and gravel roads, it is fairly easy to keep fire where they want it, he said. And with the number of people ready on the line with water, they can jump into action quickly if the fire were to escape.

“But you can’t harness smoke,” Saxton remarked. “Once you create smoke, it’s out of your control.

“We are bounded by Interstate 44 and Robertsville Road, which is fairly well traveled. We have subdivisions and houses . . . and we have to be sensitive about smoke management.”

Because of that, sometimes a prescribed fire could be called off just because of the direction that the wind is blowing.

“We want to be good neighbors,” Saxton stressed.

A Tool to Manage the Landscape

Prescribed burns are one of the tools Shaw uses to manage the landscape to promote ecological health, said Saxton.

One example would be removing an invasive species like bush honeysuckle from a woodland unit.

“Fire doesn’t necessarily kill an invasive species,” Saxton was quick to point out. “It will topkill it, which means it will kill everything above ground. But it will resprout later.

“Some invasives, like white and yellow sweet clover or Japanese stiltgrass, even like fire,” Saxton noted. “It stimulates germination.”

But the way that fire helps remove an invasive species is by clearing the area so the invasive is easier to find.

“So we may burn an area so that when I go in there in the spring, I’ll have a heck of an easier time finding what I want to remove or control.

There also are times when the prescribed burns can play a role in various research projects being conducted at Shaw.

“We do have research at Shaw that studies the role of fire on the landscape,” said Saxton. “We aren’t just out there burning because it’s fun or because the landscape needs it, but we are trying to learn from it.”