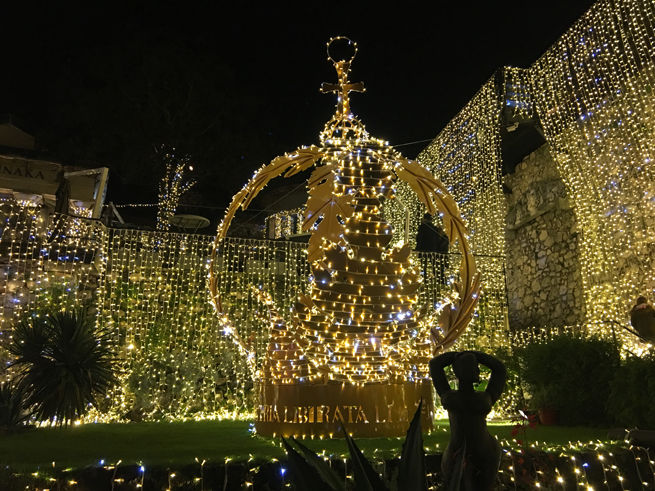 Lights, anyone? Trsat castle in Rijeka is a fairytale setting for a holiday market. 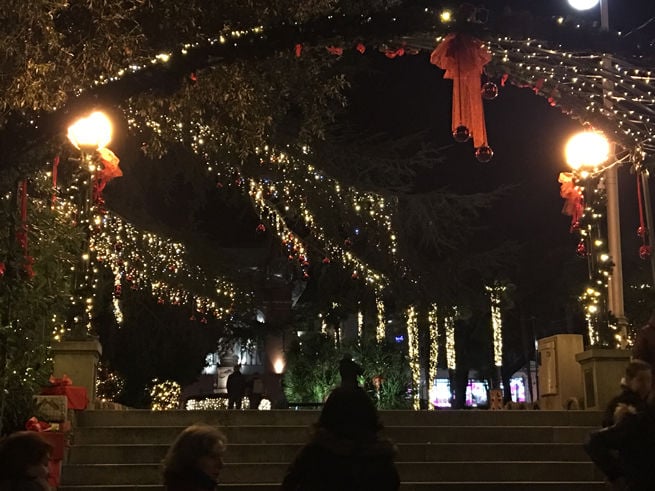 Step into the lighted wonderland of the Opatija Advent market. 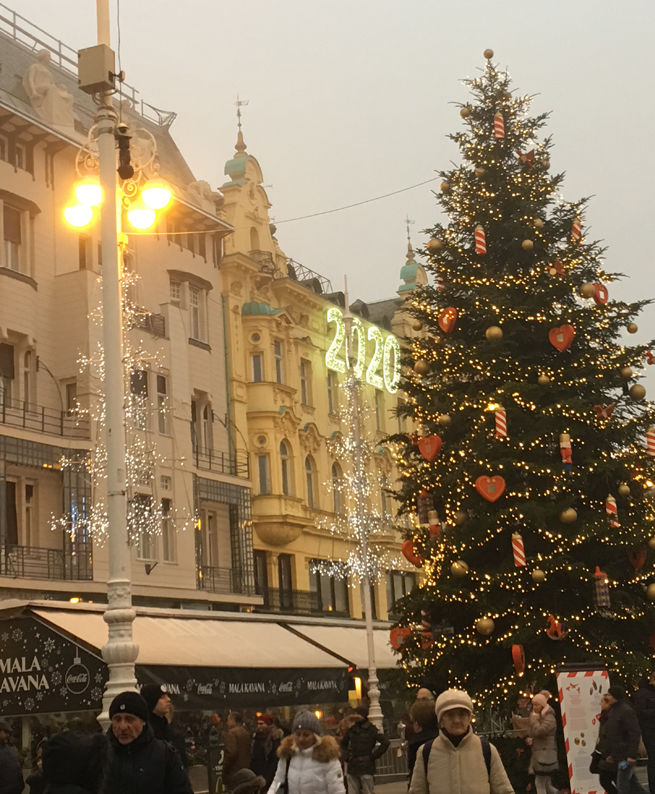 The main square in Zagreb is a popular meeting point. It is ringed by a variety of Advent markets, and will be the heart of the city’s New Year celebration. 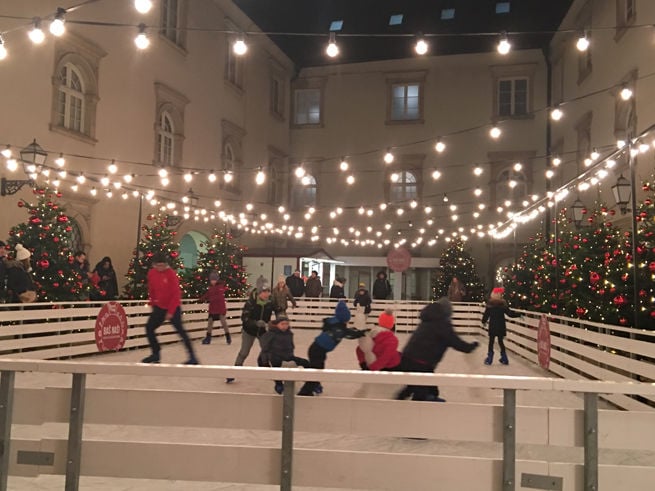 Temporary ice rinks are a popular feature of many markets, attracting young and old. 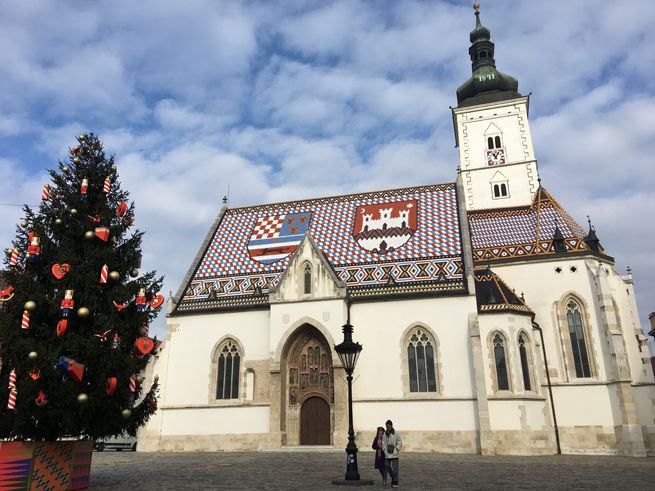 Quite possibly the most photographed roof in Croatia is that of St. Mark’s Church in Zagreb.

Lights, anyone? Trsat castle in Rijeka is a fairytale setting for a holiday market.

Step into the lighted wonderland of the Opatija Advent market.

The main square in Zagreb is a popular meeting point. It is ringed by a variety of Advent markets, and will be the heart of the city’s New Year celebration.

Temporary ice rinks are a popular feature of many markets, attracting young and old.

Quite possibly the most photographed roof in Croatia is that of St. Mark’s Church in Zagreb.

What does it take to win the title of “Best Christmas Market in Europe” three years in a row? Seeking the answer to that question was the motivation behind an early December trip to Croatia for this self-described Christmas market junkie.

Zagreb, the capital of Croatia, won the title, awarded by the travel website Best European Destinations, in 2016, 2017 and 2018, before being retired from competition.

More recently, it was voted third best Christmas market in the world for 2019, by global travel site Big 7. Off to Zagreb we went, and we were not disappointed.

The country’s largest city with 800,000 residents, Zagreb is a pleasing mix of old and new. The heart of the city, its historic core, is one of the oldest in Central Europe, with documentation dating to 1094.

With an abundance of parks, squares and fountains, Zagreb is a walker’s delight. But if your feet get tired, the blue, electric trams can whisk you wherever you want to go.

Don’t miss the 64-second ride on the Zagreb funicular. The world’s shortest cable railway used for public transportation, the blue funicular has linked the lower and upper towns since 1890. It covers a distance of 66 meters, about 72 yards.

Walking was our mode of choice for getting from one Christmas market to the next. In many cases, the markets sort of flow into one another, effortlessly leading the visitor along.

Let’s start at the main train station and wend our way to some of the highlights. With 100-plus Advent venues and events, Zagreb offers more than even the most die-hard tourist can do, even though the season runs this year from Nov. 30 through Jan. 7.

Leaving the train station, you’ll come first to King Tomislav Square, with the equestrian statue of Croatia’s first king. Stretching before you will be part of Zagreb’s Green Horseshoe, a feat of 19th-Century urban planning that links parks, squares and historic buildings.

For the Advent season, the space behind the statue is transformed into an ice-skating rink, surrounded by festive booths offering seasonal foods and beverages.

Continuing your stroll, you’ll find yourself between two rows of white wooden stalls, overflowing with assorted Croatian handicrafts and gift items. Feel free to stop at any time to browse or to sip mulled wine or munch on a snack.

The 19th-Century music pavilion, adorned with thousands of holiday lights, offers two concerts a day. At the end of the parkway, pause for a moment to inspect the 1884 meteorological post with vintage weather instruments that are wound manually every Monday.

From here it’s a short walk to the city’s main square in the heart of Zagreb. Generations of people have met friends or family either at the equestrian statue of Ban (Governor) Josip Jelacic or under the clock tower.

The square is packed with Christmas market activities from one end to the other. There’s a cluster of wooden stalls selling Croatian handicrafts and foodstuffs.

A giant Advent wreath encircles the fountain, and kids play in a log cabin set up by Croatian chocolatier Kras. Live music — from community choirs to rock bands — rings out from the main stage, while throngs of people nibble on sausages or sip on rakija, the beloved fruit brandy found throughout the country.

From the square, you can go right or left and soon find yourself in another Advent market. Pedestrian zones throughout the city center are lined with more wooden stalls, selling food, beverages and gift items.

Heading to the right uphill, you’ll be in the Kapitol neighborhood, with Zagreb’s towering cathedral. On certain weekends, there’s a live nativity in front of the church.

Or go to the left along Ilica Street to the base of the famed blue funicular. Take the short ride to the Upper Town, where you’ll wander from one colorful Advent market to another, each with its own special flair.

Be prepared for plenty of photo stops. It seems that taking selfies has become one of the main activities at Christmas markets, and the Zagreb markets oblige this passion with an abundance of photo-worthy settings and viewpoints.

Near the top station of the funicular, a visitor’s center is housed in the lower level of the Lotrscak Tower. For a small fee, you can climb to the top of the tower for a stunning 360-degree view of Zagreb.

Be forewarned that at noon each day, a historic cannon is fired, as it has been for centuries. Hearing protection is recommended if you are in the tower at that time.

We found some great gift items in the shop of the visitor’s center, including some of the handmade wooden toys that are recognized as culturally significant by UNESCO.

The Strossmayer Promenade, a walkway that clings to the side of the hill and offers breathtaking views, is transformed at Christmas into a number of markets. The Caffe de Matos features one Instagram-worthy photo setting after another, interspersed with stalls selling food and drink.

Don’t miss Advent in the Tunnel, a pedestrian walkway that was used as an air raid shelter during World War II.

On the Gradec Plateau in the Upper Town, the Bas Nas celebration is a combination Advent market and gourmet festival. Revel in live music, thousands of lights, a prime photo op with the twin spires of the cathedral in the background, a Christmas beer exhibition, and food stalls galore.

There’s even an ice rink tucked into the atrium of the Klovicevi Dvori, a former Jesuit monastery.

For an extra-special treat, go caroling with the lamplighters. Zagreb has had gas lighting continuously since Oct. 31, 1863. The network continued to expand even after Zagreb got an electrical lighting system in 1907.

Today there are 246 gas lanterns still in use, out of the 1,975 lanterns in the 1930s. They are lit in the afternoon and extinguished in the morning.

Advent by Lantern Light was introduced this year to promote the city’s cultural heritage.

We got lucky on our last night in Zagreb and stumbled upon a string instrument concert in the Baroque church of St. Catherine. What a perfect ending to a fairytale Advent experience.

A Castle on a Hill

As wonderful as Zagreb is, it is important to note that cities and towns throughout the country have Christmas markets, most of which are open through the Epiphany on Jan. 6. Our favorite turned out to be at Trsat Castle in Rijeka, Croatia’s third largest city and the UNESCO-designated European Capital of Culture in 2020.

Trsat Castle is a medieval hilltop fortress that dominates the harbor of Rijeka in Kvarner Bay. A visit involves several stops, both inside and outside the massive stone walls, including the picture-perfect market village of tiny white stalls selling gift items, foods and beverages. An open-air ice rink keeps the kids happy while the adults linger near the libations.

Wandering through one light display after another, visitors pass through towers and iron gates to reach the interior of the fortress. Lookout points on tower tops provide stunning views of the bay, while thousands of lights turn the fortress into a winter wonderland.

In a warm tower, snuggled on fur-covered sofas, we sampled Croatian wines with specialties such as Croatian prosciutto, olive oil, seafood and more.

In the city of Rijeka, colorful Christmas markets are scattered amid the neighborhoods. Along the Korzo River, stalls line the streets, offering local favorites such as gingerbread, fritule (fried doughnut balls), mulled wine and sausages, as well as handmade decorations and gift items.

Kids and adults alike enjoy a ride on Santa’s little blue train that chugs through the center of town.

The city is gearing up for 2020, when it will be in the spotlight as a European Capital of Culture. A busy program of activities is planned throughout the year.

Istria Worth a Detour

We also stopped in Opatija, in the region of Istria. The beautiful coastal town was once the holiday haunt of the Austrian Empire’s upper crust. The Christmas market was a tiny affair, tucked into a corner of a rambling city park, with stunning views of the Adriatic.

Gift items and souvenirs were not the focus. This gathering place was all about food and beverage, plus an elaborate center set up for family photos and kids’ activities.

While in Istria, we went for a morning of truffle hunting using trained dogs. Although we didn’t have much luck, the outing was terrific, and the truffle tasting prior at Karlic Tartufi was a highlight of the trip.

We also timed our visit to be in Opatija for the 14th annual Chocolate Festival. For three days in December, this seaside town celebrates all things chocolate. The event is for both adults and children, including dance performances by school groups and hands-on culinary workshops for kids.

Many other towns and cities offer holiday markets and special events, but our trip wasn’t long enough to fit them all in. Two that will be on our list for the next trip are Split, the second largest city in the country, and Dubrovnik, a gem of a medieval town, both on the Dalmatian Coast.

For more information or for help in planning a trip, here are some useful websites:

For Zagreb information, visit adventzagreb.hr and zagreb4you.com. A Zagreb Card is an easy and cost-effective way to handle transportation and museum admissions.

For general information about Croatia, visit Croatia.hr. In case you’re wondering what the HR stands for, it is Hrvatska, the Croatian term for Croatia.