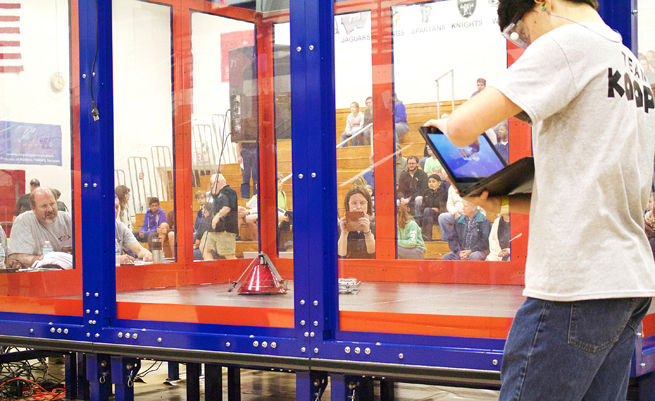 A student from Four Rivers Career Center operates the team’s Whipflash robot during a battle with a robot from another school Saturday, April 22, 2017, in the first BotsSTL held at Fort Zumwalt South High School. 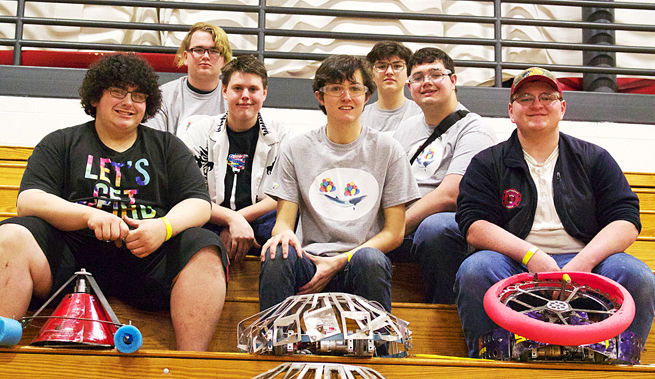 A student from Four Rivers Career Center operates the team’s Whipflash robot during a battle with a robot from another school Saturday, April 22, 2017, in the first BotsSTL held at Fort Zumwalt South High School.

Scrapper the robot didn’t live up to its name as much as the students at Four Rivers Career Center, who designed, built and programmed it, had anticipated.

The plan was for it to make “scrap” of its opponents in the inaugural BotsSTL competition held Saturday, April 22, at Fort Zumwalt South High School. But it didn’t inflict as much damage or exhibit as much aggression as its opponents did in the gladiator-style bot battle.

There were 17 robots entered in this first BotsSTL competition — most built by high school students and a couple from college teams.

Four Rivers Career Center actually had three robots that competed. In addition to Scrapper, there was Team Koopa and Whipflash. Of those three, Scrapper performed the best, winning one match, but it wasn’t good enough to win overall — at least not this year.

Already the Four Rivers students are thinking of ways to improve Scrapper’s design for the 2018 competition.

BotsSTL is a new league that was created by the St. Louis chapter of the National Tooling & Machining Association (NTMA), which is a nonprofit organization dedicated to training the future manufacturing workforce. It is affiliated with the NTMA’s National Robotics League.

BotsSTL pairs student teams with manufacturing companies, that agree to serve as sponsors, providing seed money and sometimes access to their shop to build the robot.

The three teams from Four Rivers Career Center were sponsored by Homeyer Precision Manufacturing in Marthasville.

For companies like Homeyer that sponsor the student-robotic teams, it’s an investment in workforce development.

“We can get these kids involved in engineering and manufacturing early, and they can see this is a career choice for their future,” said Gretchen Homeyer, director of employee and community relations.

In addition to building the robot that uses a weapon of some sort — a hammer, saw blade or flipping mechanism, for example — the student teams have to keep detailed records of their design and building process.

“They have to have an engineering binder that says, ‘This is why we made this decision. This is how we did this.’ They are taking the manufacturing process and learning from the beginning how they have to measure things, how to do all of this, and they are making something out of basically nothing, which is what we do here,” said Homeyer, “It gives them a little taste of what it would be like to go into a manufacturing career.”

The BotsSTL competition was created to teach valuable skills in science, technology, engineering and math. In addition to the excitement of the battle, students learn about project management, team building and presentation, all skills that are critical in the students’ workforce training, regardless of their eventual career choice.

First Battle Was in KC

Herb Homeyer, founder of Homeyer Precision Manufacturing, was serving as chairman of the NTMA in 2015 when he approached Kirk Grass, machine tool instructor at Four Rivers Career Center, about having a student team participate in the robotics competition.

The NTMA chapter in Kansas City had started a league, BotsKC, and the first competition was planned for spring 2016.

Homeyer provided the seed money to buy the starter kit to build a robot.

Conrad Hintz and Adam McGlenn were juniors at Washington High School last year when they took the original Scrapper robot to the BotsKC competition. But they quickly saw the flaw in their design.

“It was completely horizontal. The problem was it couldn’t hit robots that were underneath it,” Hintz explained.

This year, with Conrad’s younger brother, Ian, joining the team, they came up with a new design for Scrapper that placed the blades at an angle. They also increased the power, swapping out the windshield wiper motor from last year with a high-power motor this year. Unfortunately, the new design wasn’t enough to win.

“We scored the exact same as last year,” said Hintz.

The bout scoring criteria is based on aggression, control, damage, strategy and safety. But the engineering binder and interviews with the team members also factor heavily in the decision for an overall winner.

At the start of this school year, a good number of students signed on to participate in the BotsSTL contest, but as the workload increased, many fell away, said Curt Beers, IT instructor at Four Rivers.

In the end, there were seven students who competed — five from the morning class at Four Rivers and two from the afternoon.

Team Koopa included the Hintz brothers with three students from the IT program, Kevin McCallister, Joseph Fortney and Ethan Heigl, all juniors at St. Clair High School; and

Whipflash was designed and manufactured by McGlenn along with Mark Schneider.

There are several rules teams have to follow in creating their robot, said Beers.

A robot cannot weigh more than 15 pounds (unless it does not have wheels; then it can weigh as much as 20 pounds).

It cannot be larger than 24 by 24 inches; it couldn’t use projectiles or flames as weapons; and it couldn’t interfere with the radio frequencies of the opponent robots.

“Anything else was fair game,” Beers remarked.

Students worked on the robots during class, and that work counted for grades, as long as they were being productive.

The students did have to do some work outside of class, said Fortney. They had some designing, drafting and engineering things that had to be worked out ahead of time so they could come to class and be productive, Grass explained.

Funding for the material and supplies to build the robots came from Homeyer and also grants award from the WINGS Educational Foundation.

Students from other Four Rivers programs also contributed. The teams received help from welding, collision repair and graphics. Even the nursing program helped by allowing the teams to use its scale to weigh the robots.

Ian Hintz came up with the idea for the Team Koopa robot. He actually started planning the design at the end of last school year.

Team Koopa’s design features an outer cage-like shell that spins around to inflict damage. Because of the weight limit, the students created two shells — one of steel (a tougher, but heavier material) and one of aluminum (lighter weight, but less durable).

They needed the use of a waterjet cutting machine at Homeyer to create the final shell design. The students made the phone call to Homeyer to make the arrangements to get the work completed, Beers noted.

Fortney ran the controls for the Team Koopa robot at the BotsSTL competition.

“We couldn’t get our shell to spin up to speed to do any damage,” he said. “Our shell was just defensive. It protected the inside (of the robot), but it couldn’t do any damage (to the opponents).”

The third robot, Whipflash, is a cone-shaped design that moves on tank treds and uses spinning blades to inflict damage.

Balance was an issue for the robots in the competition, the students said. As parts spun around and hit the opponent, the robot would wobble, become unstable and difficult to drive, they explained.

The robot battles are held in an enclosed arena with two robots going head-to-head in each battle. If they both survive, judges determine the winner.

It is a double elimination contest, which means it takes two losses for a robot to be out of the competition.

Once a team is out, however, they are open to competing in grudge matches against others that have been eliminated.

“That’s how our aluminum shell (on Team Koopa) got so beat up,” said Fortney. “It started as a one-team grudge match, but it turned into a three-team match, then a four-team match, and it was just chaos from there.”

The grudge matches don’t count for anything other than bragging rights.

Although none of the Four Rivers teams were able to win more than a single match, the students said the entire experience was a lot of fun.

They are disappointed their robots didn’t perform better against the competition, but they plan to use what they’ve learned to build better robots for next year.

“The robot that won was totally unexpected to anyone because it was this tiny little robot that probably weighed 10 pounds,” said Conrad Hintz. “But it had just so much more power than any of the others . . . It launched a robot 1 1/2 times larger than it five feet in the air.”

The students said what they have learned going forward is that their robots need to have a more damaging weapon, although to do that, they may need to abandon using a starter kit to build it.

“The teams that did that had the most success,” said Conrad Hintz, explaining that the kits weigh so much that it limits the design.

Using a starter kit for the first couple of years was a great way to get introduced to the program, to learn the basics, said Beers, but now that the students are more knowledgeable, they are ready to get more creative.

“I think the main things they learned are that speed and torque are what they need to focus on next time,” said Beers.

B2, a robot from a team out of Pittsburg State University, was named grand champion of the BotsSTL contest.

The grand champion award is presented to the team that has the best overall performance in the arena, as well as the best documentation and best team interviews. The prize includes a trophy and advancement to the National Robotics League competition, this year being held May 19-20 at California University of Pennsylvania.

There also are awards handed out to first-, second- and third-place teams and an award for Best Engineering Documentation, which comes with a $1,000 cash prize.

Homeyer, who attended the BotsSTL competition and served as pit boss, said it was encouraging to see so many young people getting excited about something they had designed and built.

“It’s very cool to see young kids get excited about the hard work that they put into something and seeing it pay off when they beat another robot, or maybe even something happened to their robot and they need to take it back to the pit to fix it before it can go again. It’s exciting to see them working together to make something good,” she said.

She hopes someday to see those same kids move into manufacturing careers for a company like Homeyer, where they manufacture precision machine components for various industries, including defense, aerospace, medical and oil and gas.

The work the students do in creating the robots is a fun way to introduce them to the type of work they could be doing in a manufacturing plant.

For Homeyer, the goal is to see even more students from more schools around Franklin County get involved in the annual BotsSTL competition.

“We will continue to be a sponsor and would like to have even more local schools get involved with teams. We’d rather expand that reach,” said Homeyer, noting teams could be from a STEM program too.

“We’ve always tried to stay involved with all of our local schools, to keep nurturing these kids to come into our career field, because it’s really important for our community and our country, really,” said Homeyer.

“There is a skills gap, and we sometimes have a hard time finding qualified workers to run the machines that we have, and finding someone with five to 10 years of experience is even harder.”

For more information on supporting or participating in the BotsSTL competition, go to www.botsstl.org.

For more information on the St. Louis chapter of NTMA, go to www.stlouis-ntma.org.