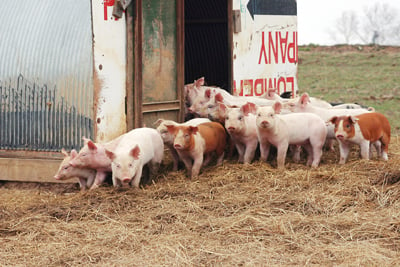 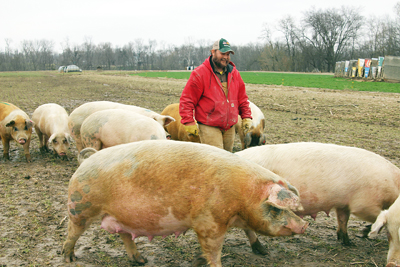 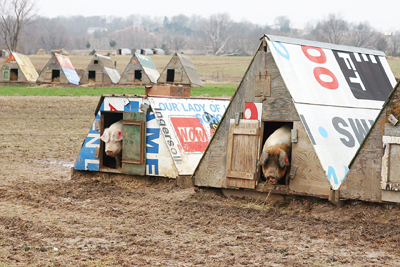 For nearly a century, Todd Geisert's family inhabited a white farmhouse along what is now old Highway 100 and farmed the rolling hills surrounding it.

The family farm isn't far from the Missouri River and is arguably even closer to the Washington city limits. There Todd Geisert raises hogs like his family has for five generations - with a little sunshine and lots of room to roam.

A fifth-generation farmer, Geisert has a 120-sow operation that produces nearly 2,000 hogs every year.

Although he was too modest to say how many acres he farms, Geisert admitted it was "enough to keep him busy," and more than enough to allow his Berkshire, Duroc, Hampshire and Yorkshire cross hogs to gallivant about.

Unlike the more common methods where hogs are brought up inside, all of Geisert's hogs are raised with access to the outdoors and are free of antibiotics and growth hormones.

This means all the pork he produces qualifies as "naturally raised" - not to be confused with organic pork which only consumes organic grain.

Geisert raises hogs in the same way that his family has since 1916. In fact, his great-uncle and father built many of the A-frame huts, which still serve as shelters for his hogs today.

Geisert has kept the houses in good repair, and the 7- by 8-foot structures, heavily bedded with straw, provide a safe haven for the newborn pigs and their mothers.

Geisert's main goal is to keep the mother pigs, called sows, comfortable and claims the old saying "If mama ain't happy ..." is true.

"As long as you keep all the mamas happy they perform well," he laughed.

When the piglets reach 20 to 25 pounds at 6 to 7 weeks of age, Geisert separates his "old ladies," or sows, from the group to wean the piglets.

After they are weaned, the pigs will be kept and fed outdoors with access to shelter. Some of the "teenagers," as Geisert calls them, will be taken to another farm in Labadie to be fed together until they reach market weight, nearly 300 pounds. It takes only six months.

Since Geisert's hogs are not kept indoors, he claims that the smell is less noticeable. He's quick to remind drivers-by who say there's an offensive odor that Washington's wastewater treatment plant is just down the road.

Although the smell of an outdoor hog operation is more pleasant, the labor is more intensive. Each day, Geisert arrives at the farm no later than 7 a.m. and spends the next two hours toting buckets to feed the hogs.

To get their attention he simply lets out a totally original, absolutely indescribable yell that sounds like a remix of the classic "Soo-ee." As the pigs scramble to grab their food, he busies himself with checking waterers and making sure all the hogs are healthy.

As one can imagine, having up to 1,000 hogs rooting through the countryside at any time can change the landscape, which is one reason Geisert and his family transfer the hogs to a different part of the farm every six months. Fences are torn down and reconstructed and the small shelters he uses are placed on skids so they can be hauled to different areas.

The main reason for the move is because Geisert's hogs also are his organic fertilizer applicators. The hogs are moved to fields on the farm where a crop was harvested the season before to help put nutrients back into the soil.

This system led to Geisert adding produce to his farm, which has been a great hit among his customers.

Originally, he planted just 120 tomato plants. Four years later he plans to plant 3,000 tomato plants over 15 acres. Last year his customers demanded up to 400 pounds of fresh tomatoes daily, making the produce an important part of his farm income.

"The pigs fertilize the vegetables," he said. "Then they eat any bad or extra vegetables we have. We don't waste much around here."

Geisert's whole farm is based around the concept waste not, want not. He receives piles of leaves from the city for his hogs to root and lay in, repairs his A-frame hog shelters with pieces of old billboards and even constructs market hog houses from old steel oil containers.

By using everything that he has Geisert makes the most of his land and provides for his family.

"It's hard to find more ground to farm," he said. "So I try to make the most of the land we have."

Literally, the fruits of Geisert's labor can be found in his self-service roadside stand.

Open seven days a week with a fresh supply of naturally raised pork and produce in season, the stand runs on the honor system. The prices for his pork and produce are comparable to prices at farmers markets.

Customers can find his prices scrawled across a dry erase board next to a calculator and pad of paper where they write up their tickets.

There aren't set hours for the stand, but Geisert tells customers, "If the sun is up, we're open."

People stop by the stand to pick up bacon for their breakfast or pork burgers for their lunch. Last year, Geisert sold 200 hogs through his roadside stand and this year he hopes to market nearly 500.

Besides the roadside stand Geisert sells some of his hogs to local youth to use for 4-H and FFA projects, but the majority is marketed to Niman Ranch in Iowa.

In order to qualify for Niman's program, Geisert was inspected to make sure that he followed the stringent all-natural protocol Niman's requires.

Geisert said the demand for his pork is largely due to the taste, which according to him is much better than hogs raised in a conventional manner.

"There is a night and day difference in the taste. You won't believe it until you taste it," he said. "We put all the good stuff in it."

The "good stuff" that Geisert is referring to is added marbling which makes the darker-colored meat from his naturally raised hogs juicer than hogs raised indoors.

Get a Little Taste

More and more people are now getting the opportunity to taste Geisert's pork. Currently, he has expanded his business from his small stand along Old Highway 100 to include nearly a half a dozen grocers and even some restaurants.

Franklin County natives can buy his naturally raised pork locally at L & F Foods, previously known as Loaves and Fishes, and the K & R Market in Marthasville. Other grocers that carry Geisert's pork include Local Harvest Grocery and Sappington Market.

Geisert's pork also can be found in some restaurants including local Café Mosaic and Rothschild's Family Restaurant, both in Washington, and St. Louis' Schlafly Bottleworks and soon Mike Shannon's Steak and Seafood.

Geisert's market is not the only part of business expanding. When he started marketing naturally raised pork in 1999, Geisert sold one product - pork burgers, which were made famous by the Washington Lions Club. Today he sells 18 all-natural pork products, everything from bacon to apple cinnamon sausage.

Geisert credits the interest in naturally raised pork to the local food movement. People are removed from the farm, but they still want to be involved with where their food comes from he said.

Needless to say, Geisert is no stranger to the process of making food. He's worked to deliver food to consumers in a "gate to plate" fashion since his father, D. John Geisert, retired in 2007.

Today he cares for his animals and produce every day without paid holidays or vacations primarily by himself, except during the summer months when he hires extra help. Yet he is satisfied whenever he bites into one of his own pork burgers, which he claims are best thrown on the grill still frozen then smothered with grilled onions and cheese.

"It's something where I can go out and be really proud of what I do," he said.

To learn more about Todd Geisert's naturally raised pork you can visit his Web site toadspigs.com. Geisert has been called "Toad" since grade school and felt his nickname would provide a memorable Web address.