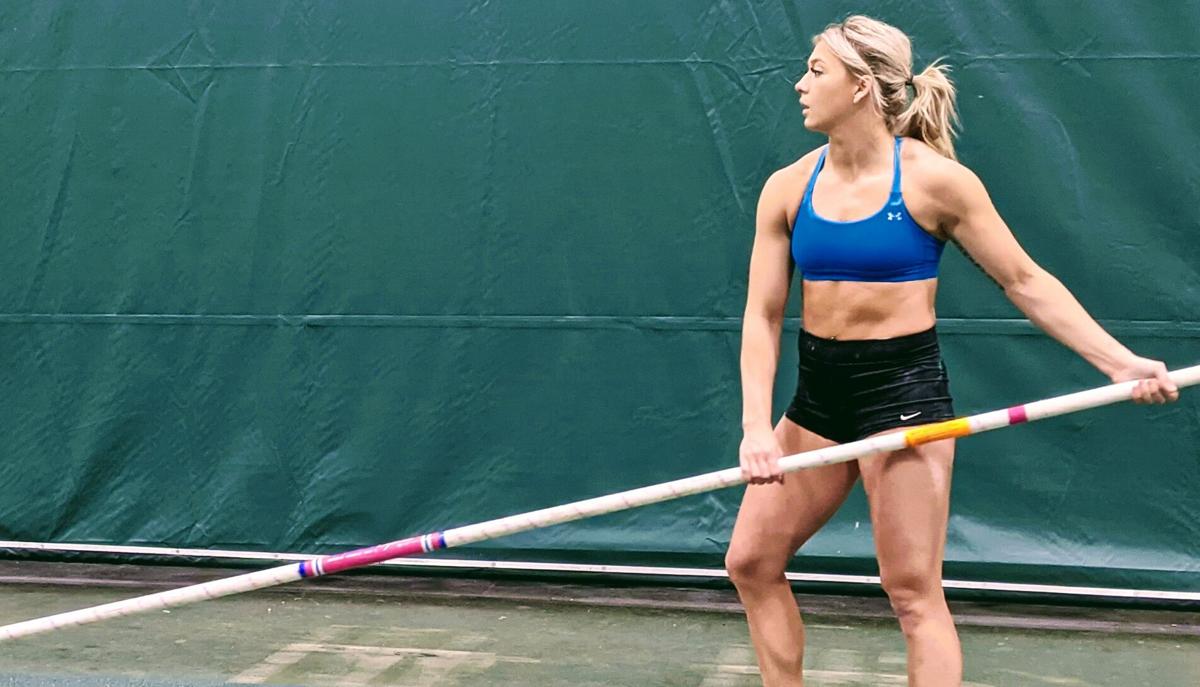 Emily Presley in February 2021 training in the pole vault at Missouri Southern State University in Joplin. 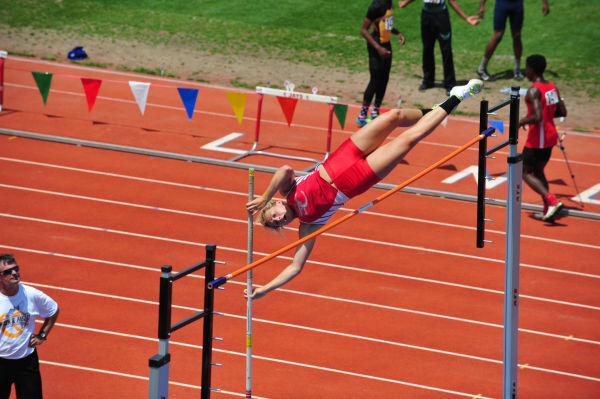 Emily Presley competes at the MSHSAA Track and Field finals for St. Clair High School in 2014. 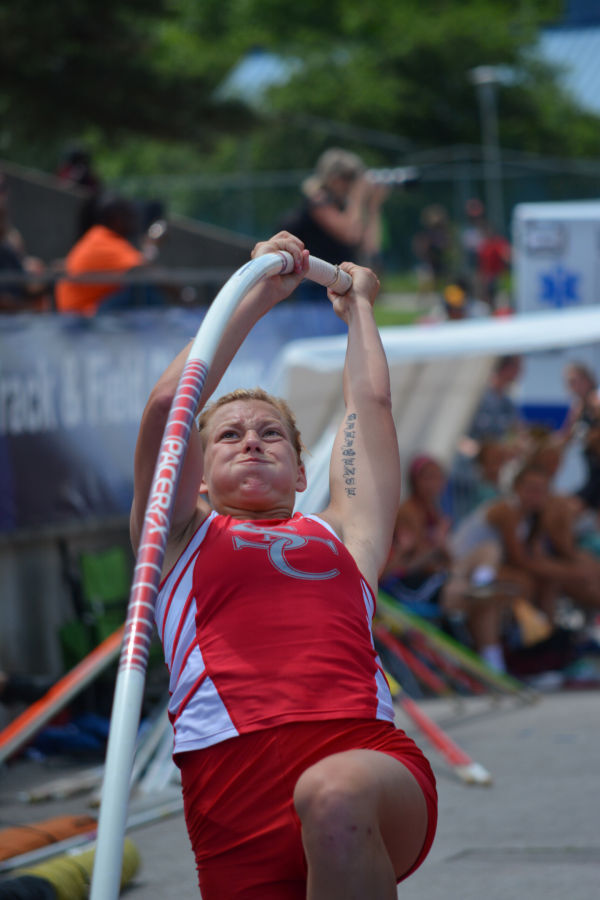 Emily Presley at the MSHSAA Track and Field finals, where she won her division in 2014. 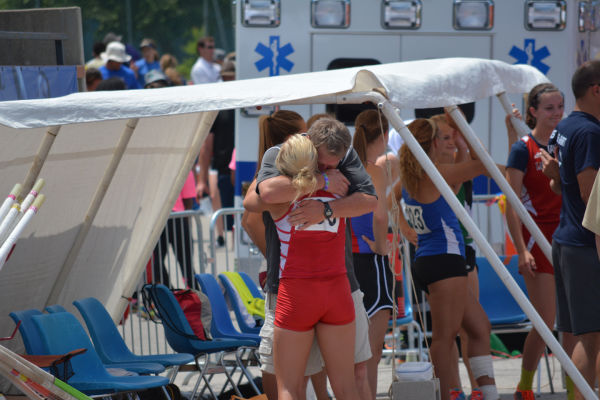 Emily Presley shares a hug with coach Jim Juergens at the MSHSAA Track and Field finals in 2014. 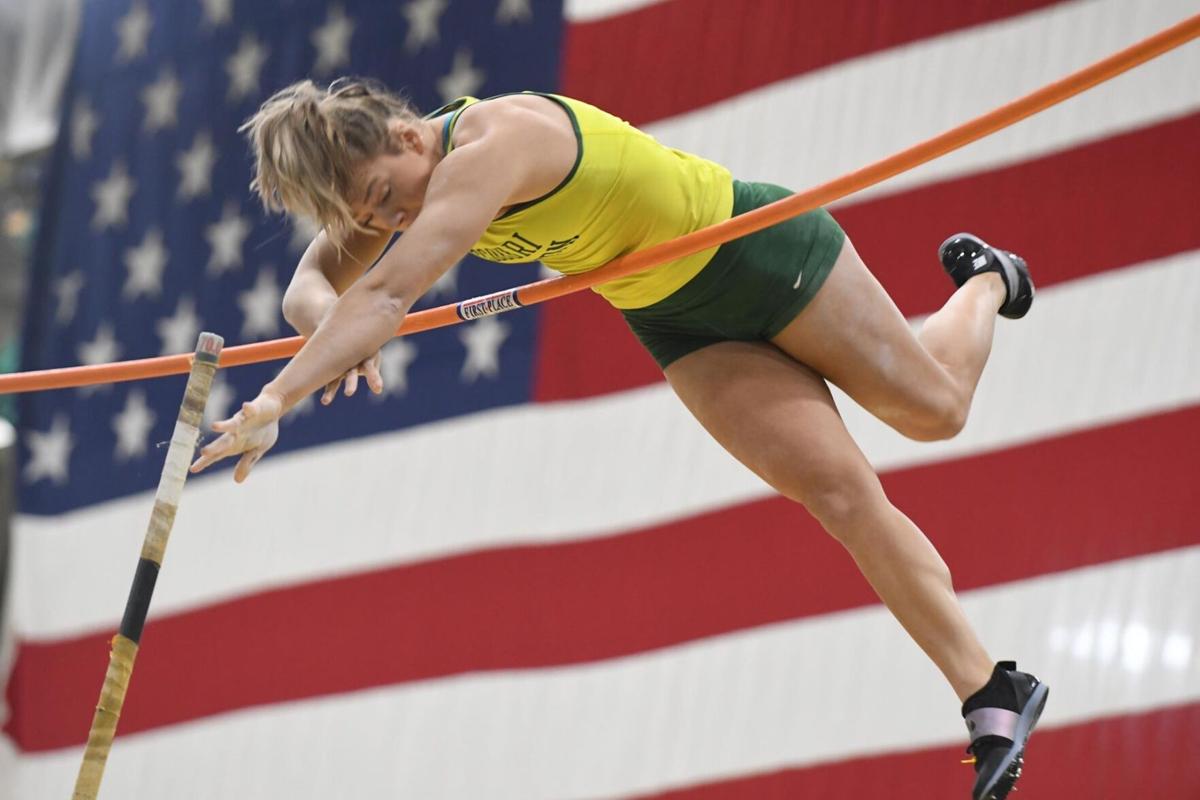 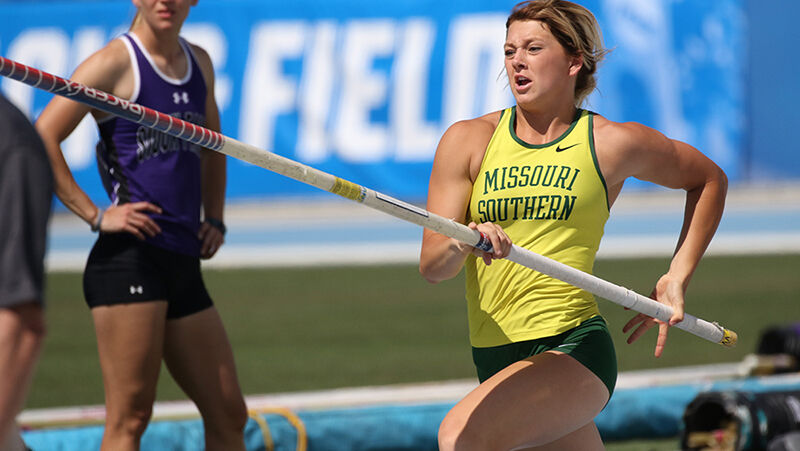 Emily Presley in February 2021 training in the pole vault at Missouri Southern State University in Joplin.

Emily Presley competes at the MSHSAA Track and Field finals for St. Clair High School in 2014.

Emily Presley at the MSHSAA Track and Field finals, where she won her division in 2014.

Emily Presley shares a hug with coach Jim Juergens at the MSHSAA Track and Field finals in 2014.

When Emily Presley was a child running around with her siblings and riding horses on the family farm, she says her mom anticipated the “tough,” energetic child might one day become an athlete.

“She always used to say I was running before I could walk,” Presley, now 24, said of her mom, Christine Consolino.

Then, as a high school track star, Presley’s coach Jim Juergens knew as early as her sophomore and junior years that she would go on to be a college and professional pole vaulter if that was her goal. After breaking the St. Clair High School pole vaulting record as a freshman, Presley topped 11 feet, 6 inches and earned second place at state during her sophomore year. The next year, as a junior, Presley won first place in Missouri, breaking the Class 3A girls pole vault record in the process with a height of 12 feet, 6 inches.

“I knew she’d be a pro when she won state the first time,” Juergens said. “You get athletes that already think they’re great and don’t have to do anything extra, but she did all the extra. After practice was over, she’d want to do more. We’d have track practice and then she’d go lift weights. … The girl is determined, let me tell you. She is second to none.”

These days, Presley’s determination is serving her as she balances a full-time job as a dental assistant with owning Barking Bulldog Boutique in St. Clair and training around 30 hours a week for the upcoming U.S. Olympic Team trials in track and field. The contest is scheduled for June 18-27 in Eugene, Oregon.

Presley graduated in 2019 with a bachelor’s degree in kinesiology and a minor in business from Missouri Southern State University in Joplin, where she was a nationally ranked pole vaulter. She said she has overcome countless injuries and challenges brought on by the COVID-19 pandemic to get where she is today — ranked among the top 30 women in the country on the pole vault event. Only the top three will compete for Team USA at the 2021 Olympics in Tokyo in August.

“I like living by the saying that the Olympics isn’t every four years; it’s every day,” Presley said. “I’m hoping to (make the team), but I’ll have more chances to qualify, so if it doesn’t happen for me, I’ll just go right back to training and doing what I’m doing for the next three years.”

Presley started training full time and competing when she graduated in 2019, when the games were scheduled for summer of 2020. Following her graduation, she trained at the Spire Institute with coach and former U.S. Olympic gold medalist in pole vault Tim Mack before joining her current pole vault gym at Kent State University with coach Bill Lawson.

She said her main focus then was rehabilitating a muscle tear in her foot and that she hadn’t fully set her sights on the Olympic team. However, the pandemic gave her more time to prepare.

“It was kind of perfect timing. Last year I was just trying to get my body where it needed to be to perform,” Presley said. “Now this is my first year being fully healthy.”

Although Presley was always running as a kid, the first sport she played was basketball, which she kept up until graduating high school. She also played volleyball. She only joined track in seventh grade because her sister had joined, but she quickly recognized how much easier the sport came to her. She competed in 100- and 200-meter races and in the pole vault. Even though it was the latter event where she showed the most natural ability, Presley said it was the one she most disliked.

“I hated the pole vault because I hated practicing it,” Presley said. “I remember this one camp I went to in high school, and I hated being there so much that I had my mom come pick me up and missed the competition at the end.”

During her years at St. Clair High School, she said competing and training in the sport she disliked ironically allowed her to spend time doing something she loved — hanging out with Juergens and his family.

Presley had first met her coach as a middle schooler, when he says she walked confidently up to him and said she was “going to break all those records.” Juergens’ son competed in the pole vault in college while Emily was in high school, and she would often join the family on weekend trips to watch him compete.

“I wanted her to see what it was like to progress to the upper levels and be a good pole vaulter,” Juergens said. “That’s when we became inseparable. … She’s like my daughter.”

“I call (Juergens) ‘Dad,’ ” Presley said. “He taught me everything I knew up until I left St. Clair (and) drove me to camps and to my first Junior Olympic trials. He paved my way to success.”

“I saw my way to college through pole vault because I was good at it,” said Presley, a first-generation college graduate. “I told (Missouri Southern) I couldn’t pay, and they said if I came and ran track for them they’d give me 110 percent. Well, 110 percent means you have to buy in, and you have to love it. That happened for me. It’s like when you have to pretend you’re sleeping to fall asleep. Once I bought in, I fell in love with it.”

Her coveted college diploma in hand, Presley said her determination and support from home encouraged her to continue on in the sport and form a new goal: being a professional pole vaulter. In track and field, athletes “go pro,” gaining eligibility to compete in professionally sanctioned meets, in two ways, both of which Presley has checked off. She has gained official membership in USA Track and Field, the country’s largest governing body for the sport, and she also has accepted financial sponsorships from companies. So far, many of them have come from small businesses in and around St. Clair.

“I was honestly surprised by how much people have my back,” Presley said. “This sport is not the NFL or MLB. I’m never going to get a $50 million contract for pole vaulting. So I was grateful and overwhelmed by the amount of local support I got.”

The sponsorships help her fund training camps, plane tickets to meets and equipment. Juergens said a high-quality pole can cost up to $5,000, and she needs multiple each month. The sponsors are her most important source of revenue for the sport because she said she doesn’t spend any earnings from the Barking Bulldog Boutique on anything except that business.

The business — which she named to honor her dog, Sophie, and also her love of the St. Clair High School Bulldogs — moved into its home in the St. Clair Plaza in fall 2019.

Consolino, who recently opened the TacOMG! Mexican restaurant in St. Clair, runs the business during the week, and Presley called her mom “her Swiss Army knife because she does everything.”

“Anytime I need something, I go to my mom,” Presley said. “She’s a business owner and has her hand in a lot of different things, and that’s how I want to be. … I think it’s important for people to know how much help I get from my mom.”

Presley started selling custom-made shirts and other projects during college, using a Cricut machine to make designs, and she sold the items out of Consolino’s bail bond business. It started as a fun hobby, one Presley could enjoy even when she was injured and couldn’t train.

“One of the reasons I went toward pole vault is because I always felt like I wasn’t good at anything else. And then when I got injured, I felt really lost and didn’t know who I was without it,” Presley said. “I started reaching into other dimensions of my life and trying to build myself up and do other things.”

As the Tokyo Olympics loom — the cutoff for rankings going into the trials is Sunday — Presley said she is focusing on overcoming challenges in her first year as a professional vaulter, which she said is usually one of an athlete’s toughest years in the sport. Although she regularly jumps above 4 meters with a personal best of 14 feet, 6.25 inches, she also has to work at finding a sustainable lifestyle balancing work, play and pole vault. She stressed again that work is made easier by the number of people cheering her on.

“I’ve always been the person who wants to make it to the next level,” Presley said. “And when you can build a village of people who believe in you, the dream just keeps growing from there.”