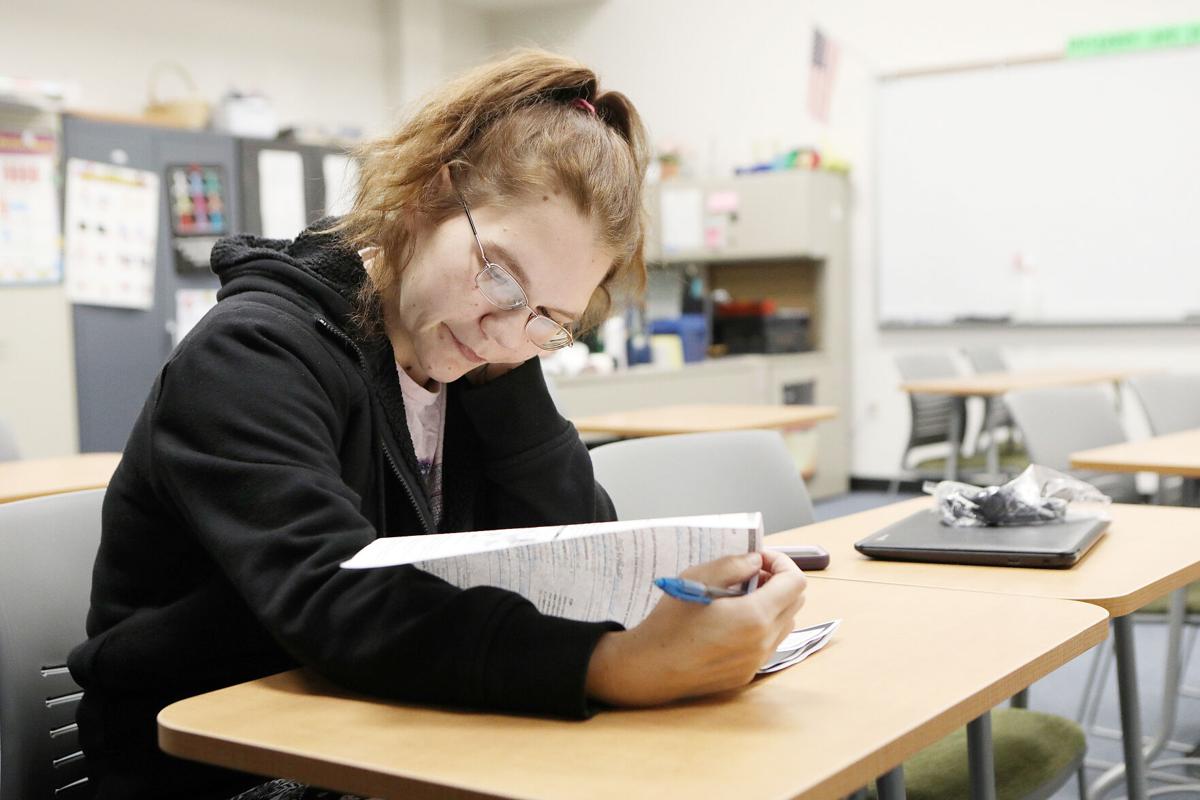 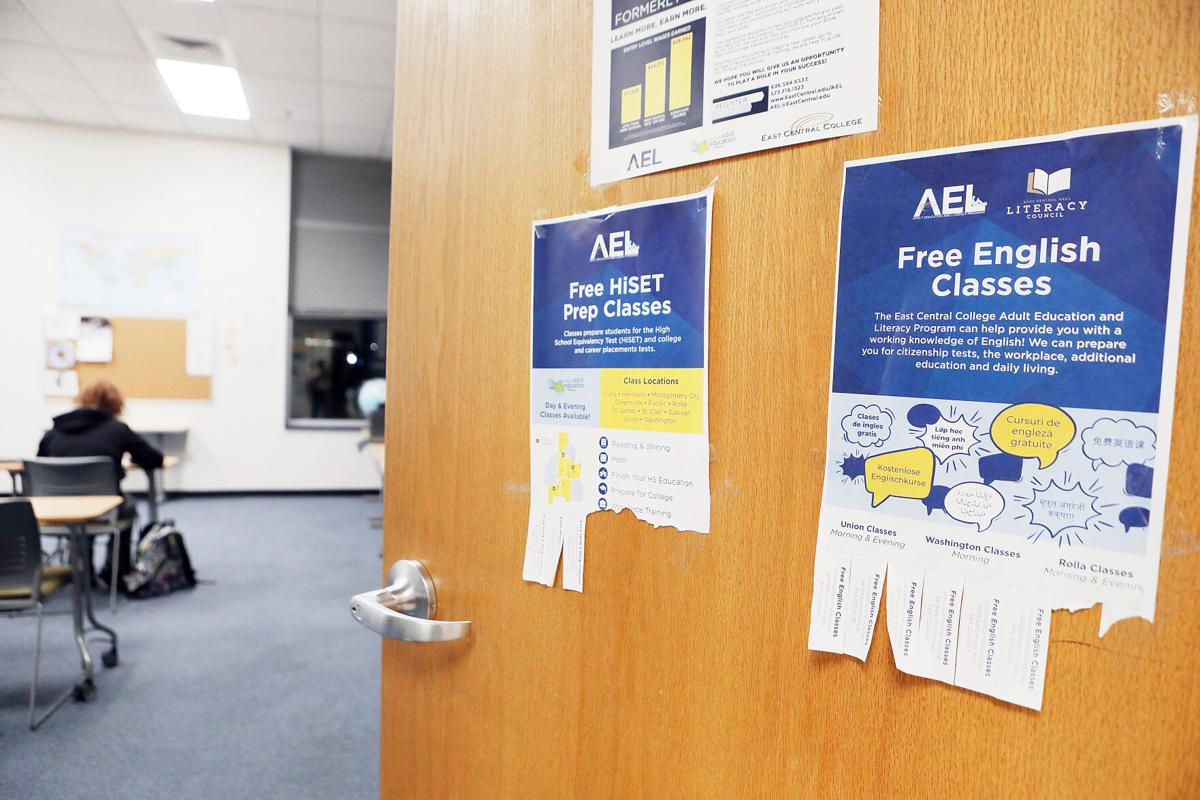 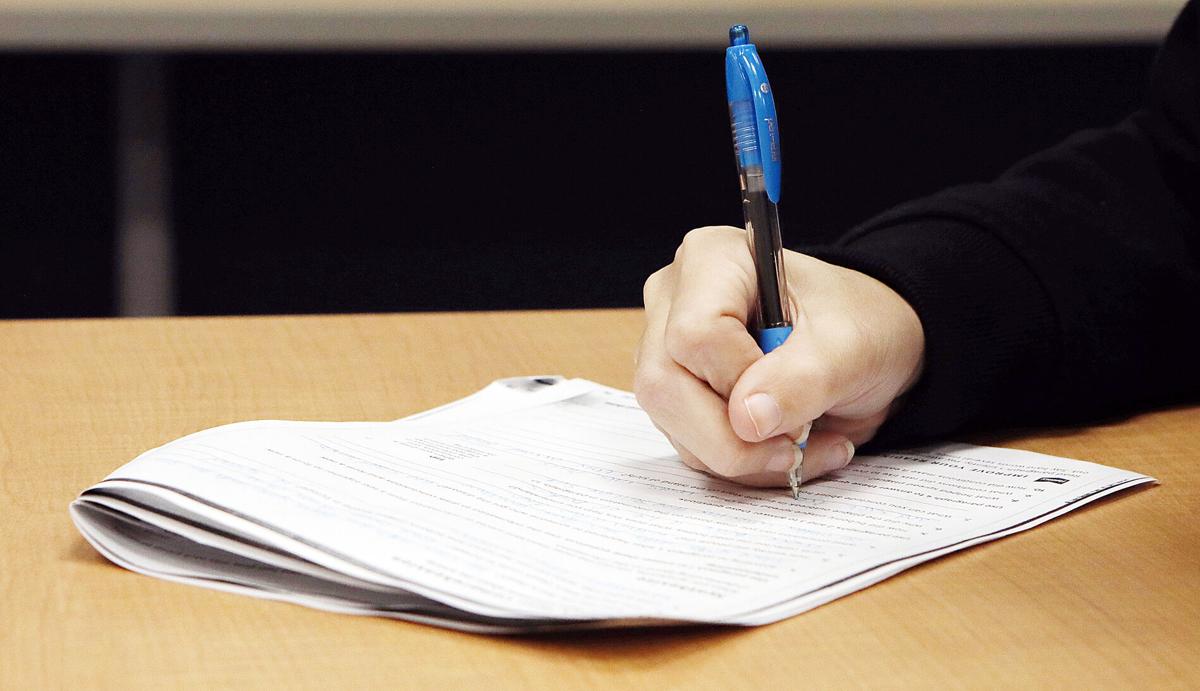 A student works on coursework Dec. 20 at East Central College. Students in the adult education classes can study for a high school equivalency test or take English as a Second Language courses. 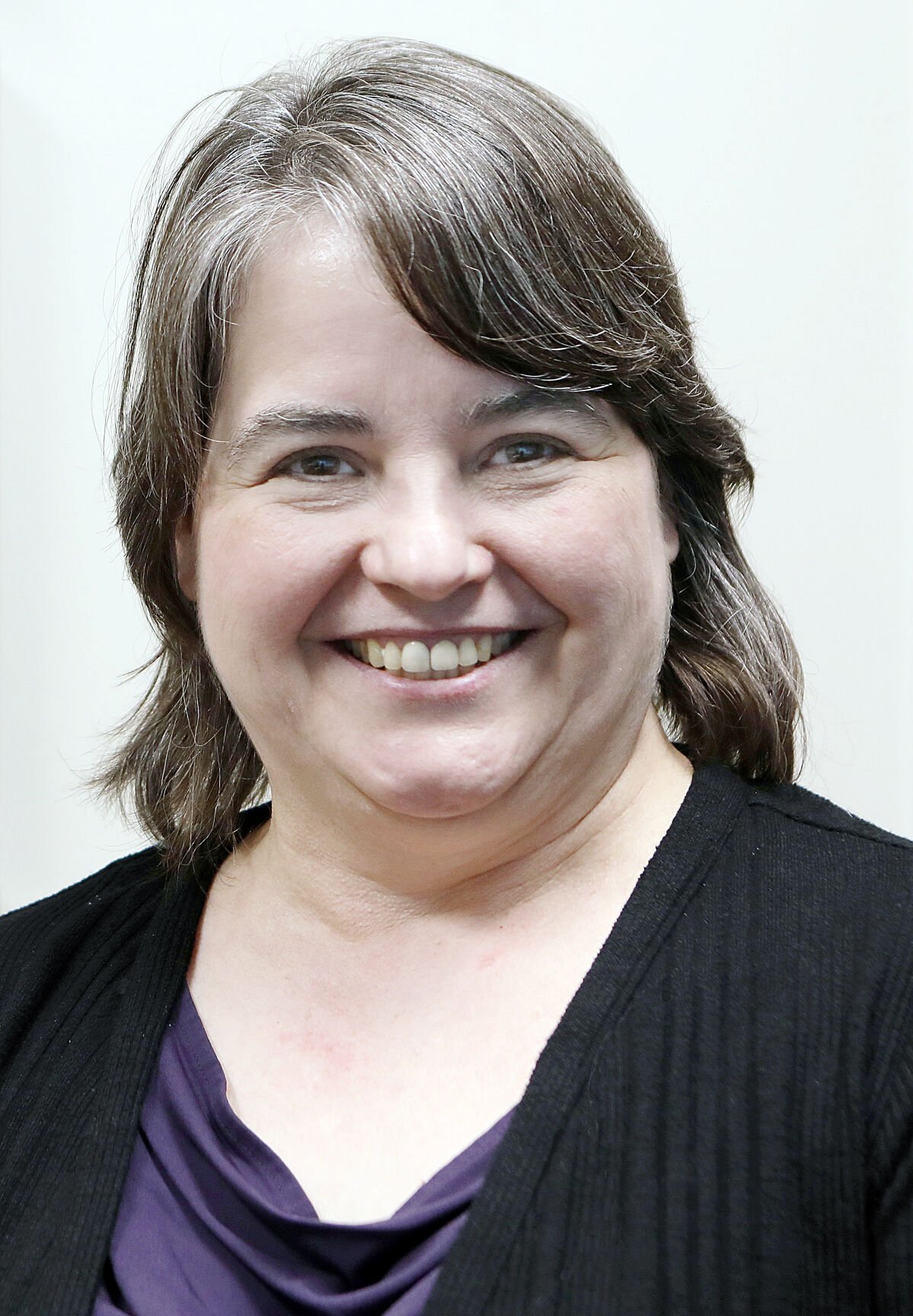 Alice Whalen, above, is executive director of the East Central Area Literacy Council.

A student works on coursework Dec. 20 at East Central College. Students in the adult education classes can study for a high school equivalency test or take English as a Second Language courses.

Alice Whalen, above, is executive director of the East Central Area Literacy Council.

The small group of Sullivan students in the class where Sherry Horn volunteers vary widely in age, backgrounds and occupations, but for three hours twice a week, they are united in a common mission — to complete their high school education.

“There’s one student who quit high school because she adopted her sister’s children when she was still in high school, and now they’re in school, so she has returned to get her education,” Horn said.

“The students all have different situations for why they’re there, and I just feel like anything we can do to help them get that foundation is going to help them better themselves in all different areas of their lives,” she said.

Horn has been volunteering for about two years with the class, one of many offered across the region by the East Central Area Literacy Council, a nonprofit that offers free high school equivalency education and English as a Second Language courses in Crawford, Franklin, Gasconade, Montgomery, Maries and Phelps counties.

The program started in 2010 in Rolla, and in the decade since it has educated hundreds of adults. In 2019, it served about 400 students with 30 volunteers who clocked 3,000-plus hours in the classroom.

As executive director of the program, Alice Whalen is more excited than most by that accomplishment. From her office at East Central College, she beamed while remembering the success stories over the years.

“We had a 60-year-old gentleman one time who couldn’t read,” she said. “He’d been a truck driver his whole life. But he wanted to come to the classes to be able to read stories to his grandson. We had an English language student from Washington who did our manufacturing training prep course, and she got hired on at Silgan full time. ... Even my daughter, whose school shut down during COVID, she finished up (high school) here and just finished her first year of college.”

Earlier this year, the program expanded again when each county set up its own council to fundraise and recruit students for the classes. Steve Campbell, director of Scenic Regional Library and president of the literacy council, said this has helped get more local dollars into the organization.

“We see this with our Friends (of the Library) groups — people don’t want to donate money that’s going out to another county,” Campbell said. “We thought the local councils would give people a sense of ownership in their own area, and that’s been really successful so far.”

Following a push earlier this year that each county raise $1,000 for scholarships and classroom materials, most counties have easily surpassed that number. The Franklin County council has raised about $3,700 so far.

Whalen said those dollars are essential. A HiSET, the high school equivalency test Missouri uses, costs about $98, which she said people can have trouble affording.

“One hundred bucks might not sound like a lot to some, but if you’re in a minimum wage job, if you have children or anything, that can be a lot of money,” she said.

Campbell stressed that despite adult illiteracy being stigmatized, it’s more common than most might think. In 2019, the National Center for Education Statistics reported that about one in five American adults, or 19 percent, perform at the lowest level of literacy. About half of American adults, or 54 percent, read below a sixth grade reading level, according to the U.S. Department of Education.

“The stigma is that if someone can’t read, there’s something wrong with them. But it might be a situation where they had a learning disability, or they fell back in school due to personal problems, or they got held back when they were younger and never learned those skills,” Campbell said. “It’s really hard to convince people to take a step like this because they’re having to admit something that’s embarrassing to them. But it shouldn’t be embarrassing. It’s not their fault.”

A 2020 study by Gallup found that the level of literacy could be costing the U.S. as much as $2.2 trillion a year in lost GDP. That would support findings from the National Institute for Literacy, which has reported that three out of four people on welfare can’t read and that as the literacy rate doubles, so too does per capita income.

Volunteering a few hours each week or donating to a council would not only provide someone with education but also have a ripple effect, Campbell said.

“If you help someone learn how to read and get their HiSET, the impact will last that person’s entire lifetime. They’ll have more earning potential, more self esteem and self-confidence. It will impact their ability to take care of their family, and there’s a better chance their child will be more educated, which will be passed on to future generations,” he said. “You can’t solve all the world’s problems, but if you can help one person, that person can in the future help other people. It’s paying it forward.”

Volunteers assist the teachers by providing one-on-one help to students during class. There is a brief training they undergo before joining a classroom, either a high school equivalency or English language class. Whalen said the volunteers are people of all professions, many of whom have retired.

Among them is Lyle West, a car dealer who volunteers in the Rolla English-language class working mainly with spouses and family members of people studying at Missouri S&T.

“I really enjoy listening to where they come from and how their culture compares to ours,” he said. “But the most interesting thing is watching how diligently these people are working both at their jobs and also to gain this language. Our language is really difficult to learn because so many things don’t follow the rules, but they come in after a full day of work, they haven’t eaten dinner, and will meet from 5 to 8 o’clock week after week. They’re just determined.”

Horn spoke of one such determined student in the high school equivalency class she works with in Sullivan. He was already in the class when she began volunteering in July.

“He has his HiSET scheduled, and I’m very confident he will (pass) it. He’s doing really great,” she said. “It’s very rewarding to see these young people who are really committed. I just feel like education is foundational.”