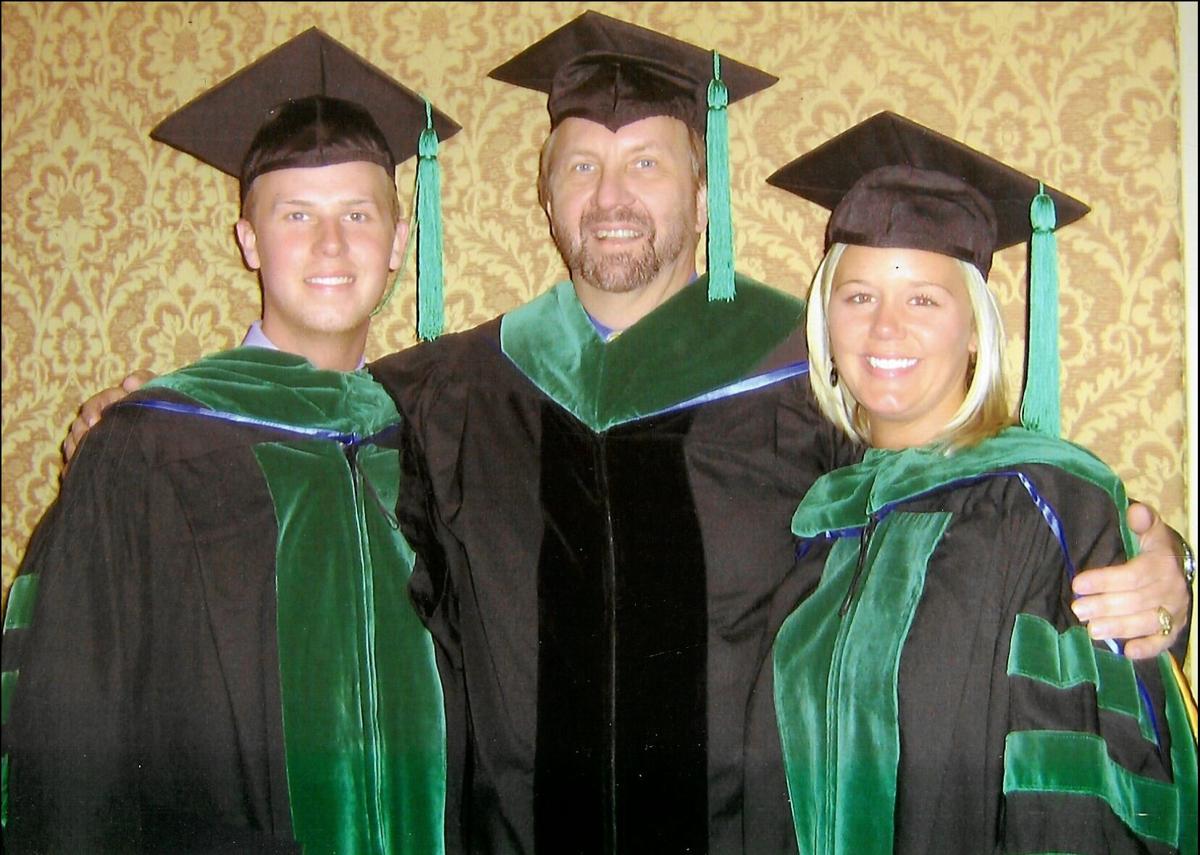 John Visser with his son Jared Visser and daughter-in-law Shirley Visser, both of whom are also practicing podiatrists at Mid-West Podiatry & Associates. 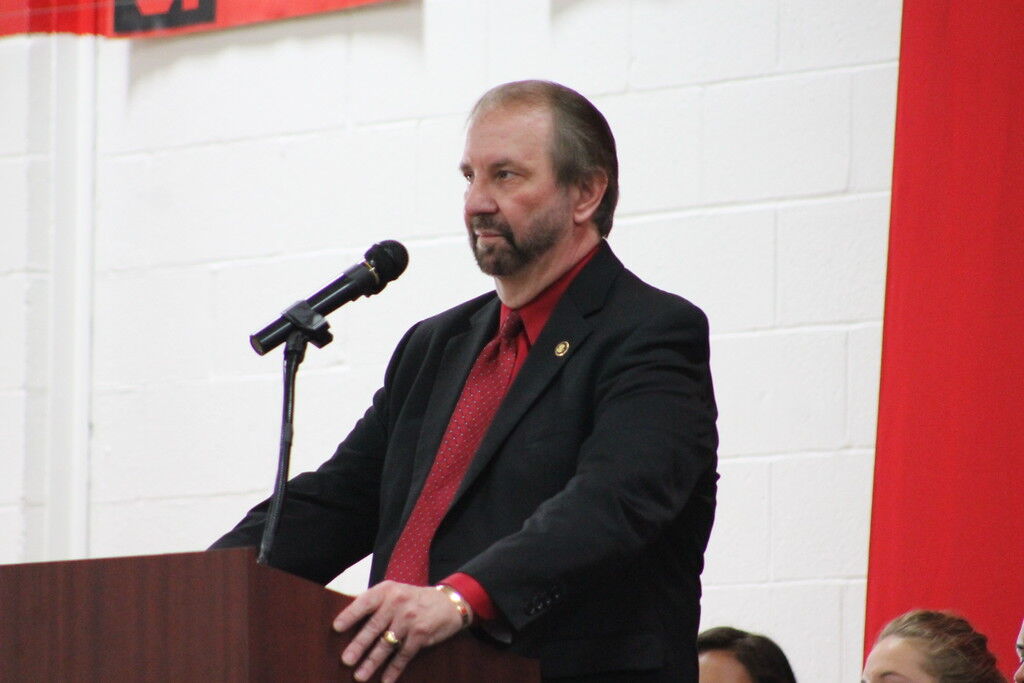 John Visser delivers the commencement address at the graduation ceremony of his alma mater, Cardinal High School in Middlefield, Ohio, May 28, 2016. 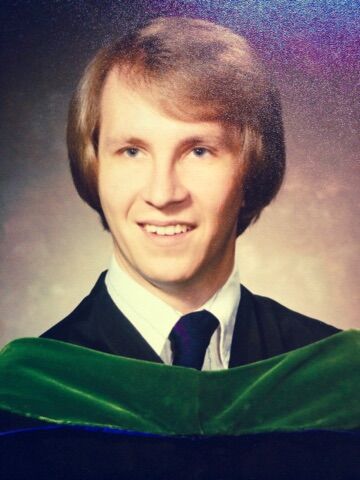 John Visser photographed shortly after his graduation from the Ohio College of Podiatric Medicine in Cleveland in May 1978. 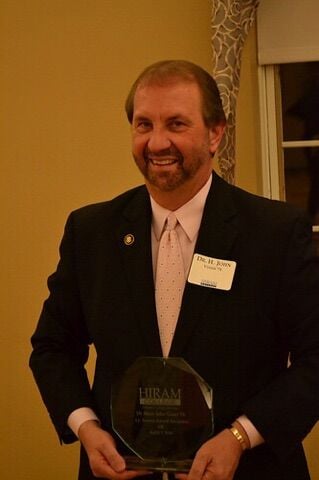 John Visser with his son Jared Visser and daughter-in-law Shirley Visser, both of whom are also practicing podiatrists at Mid-West Podiatry & Associates.

John Visser delivers the commencement address at the graduation ceremony of his alma mater, Cardinal High School in Middlefield, Ohio, May 28, 2016.

John Visser photographed shortly after his graduation from the Ohio College of Podiatric Medicine in Cleveland in May 1978.

Each night at dinner tables across the country, family members share a meal and enjoy conversation, often starting with rehashing the day’s events at school or work. For the Vissers, that first conversation is usually shorter because they already know what happened at work. When it comes to the only family-run podiatry office in the region and one of few in the Midwest, work and family time greatly overlap for the two generations of relatives who run it.

“(Family practices) in podiatry are definitely not common,” Shirley Visser said. “For us, the dynamic has worked so well. We’ve all found our little niche.”

Jared Visser said the opportunity to work alongside his wife, brother and dad is special and very unique.

“It’s not easy to get two positions at the same practice and not be competitors,” he said of joining the business with his wife. “And I’ve learned a lot with my dad.”

Midwest Podiatry & Associates celebrated its 40th anniversary June 28. In the days following the occasion, John Visser reminisced on how the profession has changed over five decades. When he started his residency in 1978, he went to work each day at the only St. Louis-area hospital to admit podiatrists. Now, the 68-year-old and his seven-member staff have admitting privileges at Mercy Hospital Washington, SSM DePaul, SSM St. Clare and Des Hospital.

John Visser’s interest in medicine and sciences started as a young boy, before he can even remember, he said. He grew up in Huntsburg, Ohio, an unincorporated town an hour east of Cleveland. Visser’s high school served multiple neighboring towns, and his class had 69 students in it. Of them, eight went on to college, and Visser said that in his home, there was never a doubt that he would be one of them.

“My mother was the major driving force. There was no way she was going to allow me to not go to college,” John Visser said. “I always wanted to; I just didn’t know if I was going to be able to cut it. But my mother really pushed me.”

He started at the Geauga campus of Kent State University near his hometown after getting rejected from Hiram College. After two years, he applied again and was accepted to finish his bachelor’s degree at Hiram College.

“When I first applied to Hiram, my guidance counselor actually said, ‘Oh, he’s not gonna cut it.’ ... I really wasn’t a great student in high school. I was in the C group,” John Visser said. “But then after I went through my first two years (at Kent State Geauga), I transferred into Hiram.”

John Visser graduated high school the year after the Kent State shootings, when members of the Ohio National Guard shot and killed four students and injured nine others who were protesting the Vietnam War, and was now graduating from college one year after the Vietnam lottery draft had ended. Almost every day during 1972, he checked the newspapers to see whether his number — 145 — would be drafted. The highest number drawn that year was 95.

“If I had gotten drafted, I would have gone, but I was fortunate that it didn’t happen,” he said.

He first heard about podiatry school from a college friend and enrolled in the Ohio College of Podiatric Medicine in Cleveland. He called it “the best move I ever made in my life.” At the time, there were only five major schools for the medical specialization, which Visser says was not well respected among other doctors.

Visser rode another wave of emerging development when he showed interest in new technology in his line of work. He already was practicing full time when MRI and CT scans became available in Missouri, and he had to get extra training on surgical procedures that weren’t commonplace when he was in school. When he started his Washington practice, he was the only podiatrist in town with surgical training.

Despite the growing technology available and increasing respect for the profession, John Visser said he saw through the first decades of his career. One major hurdle remained in place for surgically trained podiatrists, he said. State law at that time barred them from operating on ankles. Visser testified in the Missouri House of Representatives and the Senate, and the bill allowing podiatrists to perform ankle surgery was eventually signed by Gov. Mel Carnahan.

Of the three Drs. Visser, John Visser works the most in education, Shirley Visser said. He’s been invited to lecture at international conferences and universities in England, Hungary, Austria, Sweden, the Czech Republic, the Bahamas and more. Visser also helped develop residency programs at other hospitals statewide, including one at Mineral Area Regional Medical Center in Farmington, which he ran from 1984 until the hospital closed in 2015, training 57 residents over the years. He also has directed the podiatric residency program at SSM DePaul since 2012, where he’s trained 32 residents so far.

When he looks back on his career and the places it’s taken him — from annual meetings of the German Association of Foot and Ankle Surgery in Lubeck, Germany, to the podium of Kent State University to be recognized with a Professional Achievement Award — John Visser says he feels fortunate.

“I mean, considering where I came from and what my outlook was, it’s mind-boggling,” he said. “Joining this profession was the best thing I ever could have done. It offers great care and can really help people.”