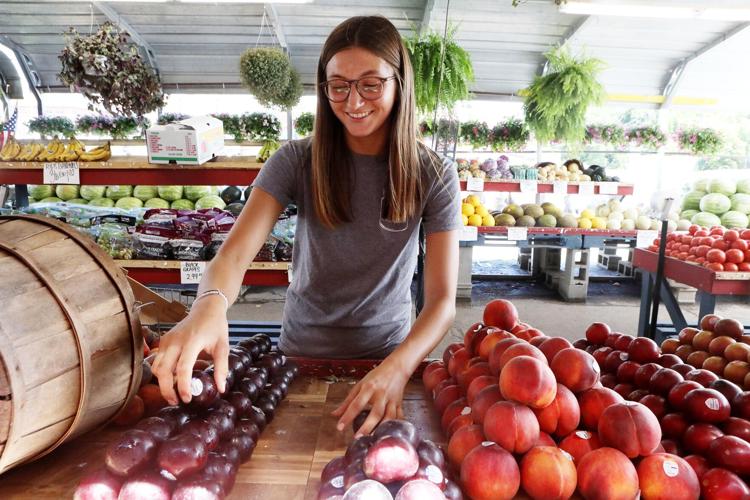 Amalia Bobcac stacks plums at a produce display at Andy’s Produce Too in Union on July 11. Drought conditions across Missouri and much of the Midwest have hampered vegetable and fruit harvests. Locally, tomatoes have been the most impacted by the drought, making them difficult to find for retailers and produce stand vendors. 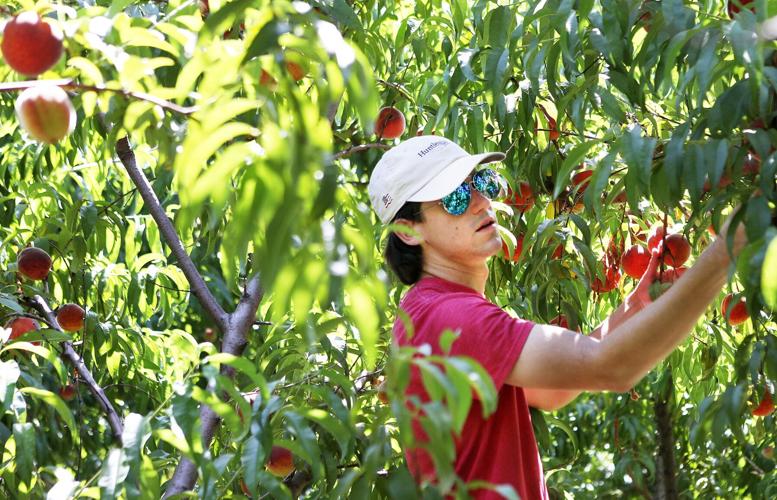 Walking through the Thierbach Orchards & Berry Farm in rural Warren County on July 11, Jake Turner pauses to pick some ripened peaches. Peaches are among several locally grown items that are being sold at produce stands in the area.

Amalia Bobcac stacks plums at a produce display at Andy’s Produce Too in Union on July 11. Drought conditions across Missouri and much of the Midwest have hampered vegetable and fruit harvests. Locally, tomatoes have been the most impacted by the drought, making them difficult to find for retailers and produce stand vendors.

Walking through the Thierbach Orchards & Berry Farm in rural Warren County on July 11, Jake Turner pauses to pick some ripened peaches. Peaches are among several locally grown items that are being sold at produce stands in the area.

Tomatoes, which are typically ready for harvest in early June, are just becoming available in numbers. Cheryl Orlando, owner of Andy’s Produce Too, said they have been the hardest vegetable to find this growing season. Orlando has been around produce stands for as long as she can remember and said she believes the lack of rain is what’s caused the late harvest.

The success of this year’s growing season came despite the fact that the majority of the south eastern part of the state is abnormally dry or in a moderate drought, according to the U.S. Drought Monitor. Debi Kelley, a field specialist in horticulture for the Missouri University Extension office doesn’t predict this dry season will let up any time soon.

“Now, what we’re seeing as far as growing of crops is that right now we have a really high temperature, we don’t have enough moisture in the ground,” Kelley said. On Monday, Governor Mike Parson issued an executive order, declaring a drought alert for 53 of Missouri’s 114 counties, recognizing that nearly 75 percent of Missouri is in a drought, with 35 percent of the state experiencing severe to extreme drought.

These regions include southern parts of the state as well as areas south of the Missouri River.

According to the U.S. Drought Monitor, the majority of Franklin County is in a “moderate drought,” while the eastern portion of the county near Pacific and St. Albans are “abnormally dry.”

“Moderate drought” refers to a time when the top soil is dry, corn yields are small, pasture grasses stop growing and crops are stressed. Pond and river levels also begin to significantly decline, according to researchers with National Drought Mitigation Center at the University of Nebraska-Lincoln, the United States Department of Agriculture, and the National Oceanic and Atmospheric Administration.

Not only is tomato season later this year, tomatoes and other produce items have risen in cost. The lack of rain starting in the late spring to now, which caused the delayed ripeness of the tomatoes, is one of the reasons tomatoes have increased in price. Kelley said gas prices and increased plastic prices are also contributing to the rise in produce costs.

“Our peaches are $2.50 per pound and normally they’re $1.90 per pound, strawberries have consistently been pretty cheap,” Orlando said. “Our apples have been a little bit more expensive, but it’s not drastic.”

The drought can also cause physical deformities on produce, but Kelley said this does not impact how edible the produce is. These physical imperfections on the produce makes them second cull. Often second cull picks are available at produce stands and farmers markets for a reduced price.

“Our society has been bred to go to the grocery store and see only perfect produce,” Kelley said. “It’s okay to buy some of these things that have blemishes that are physical, they’re not diseased or insects.”

Kelley warns with drought conditions the way they are it’s likely tomatoes and blackberries will experience sun-scalding, which can raise the cost of produce. The lack of rainfall can’t stop Missouri’s main growing season though and local produce stands and farms have loaded up with the freshest produce from the successful grow.

While Thierbach Orchards doesn’t grow tomatoes, peaches and blackberries are in season now. When Thierbach Orchards opened over 20 years ago it was only growing peaches. Since then it has grown to produce an assortment of berries as well as apples. Customers can visit the farm for the interactive experience of picking fruit themselves. Thierbach Orchards also has two produce stands for those looking for a more typical shopping experience, one in Marthasville and one in Washington.

John Kopmann, who owns Three Girls and a Tractor, has been selling tomatoes and other produce at the farm for about 40 years. At the farm Kopmann only sold sweet corn, tomatoes, watermelon and cantaloupe though. He started selling a wider variety of produce and has been at the Washington Farmers Market for nearly 20 years. At the Washington Farmers Market you have to grow it or make it yourself to sell there. This factored into Kopmann’s decision to start selling produce at the farmers market.

“I’d rather go to a farmers market, not a flea market,” Kopmann said.

Right now tomatoes, sweet corn, zucchini, cucumbers, eggplant and radishes are in season and can be picked up from Three Girls and a Tractor at the Washington Farmers Market.

While tomatoes are later than usual and many are sun-scalded, the time to buy tomatoes is upon us and these produce stands are ready with the freshest fruits and vegetables Missouri can provide.