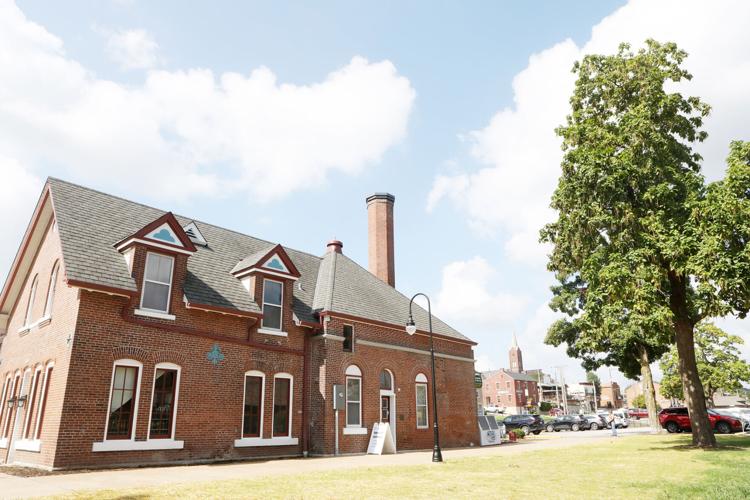 Pictured above, WashMO on the Go Sept. 7 at Rennick Riverfront Park. The business operates inside the historic Waterworks Building. 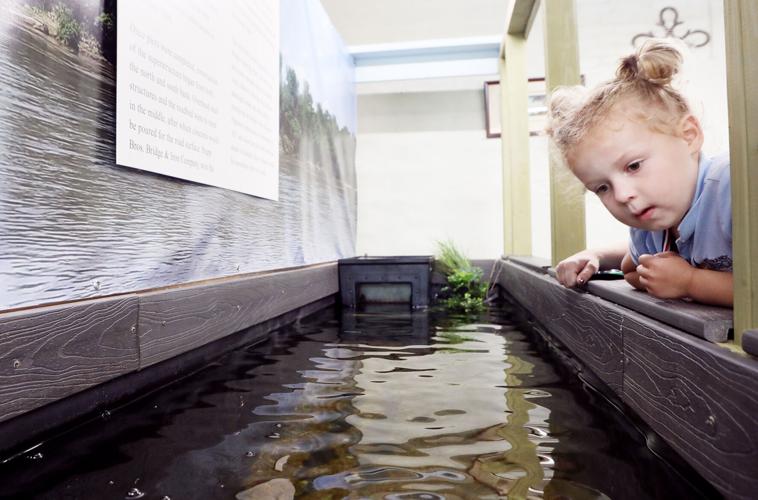 Wilhelmina “Billie” Haddox peers into the fish tank at WashMO on the Go Aug. 24. The display informs visitors about fish in the Missouri River. 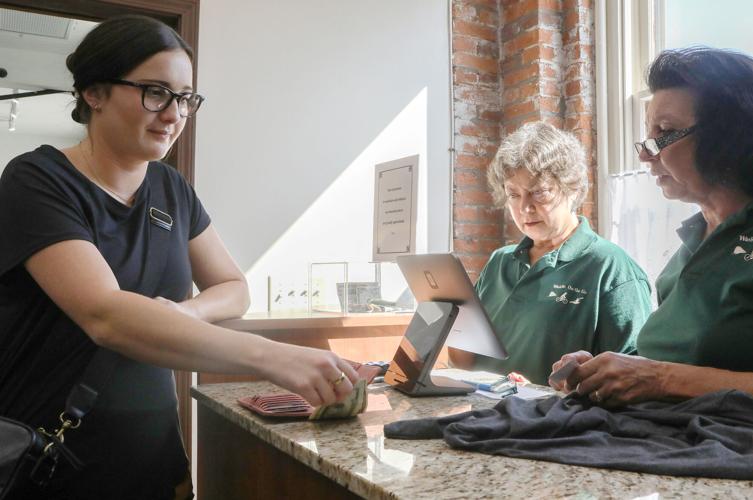 Toni Cavin, center, helps troubleshoot the register system Aug. 24 at WashMO on the Go as Cassidy Desmond, left, buys a shirt during the grand opening. 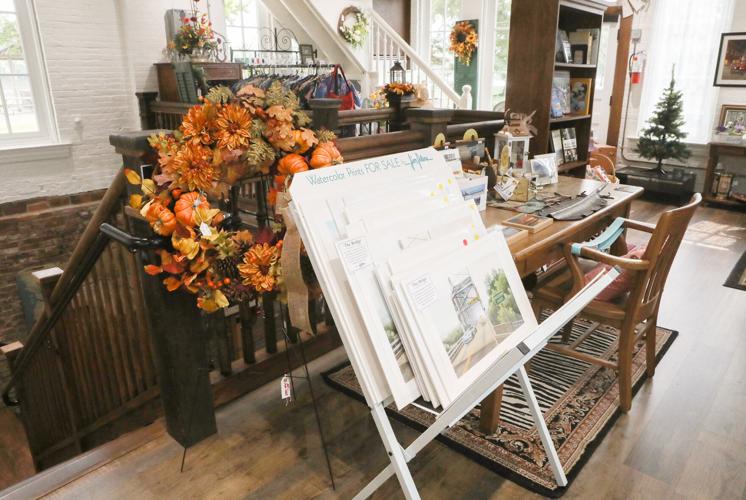 Items for sale are displayed at WashMO on the Go Sept. 7. Many of the wares come from local Washington businesses. 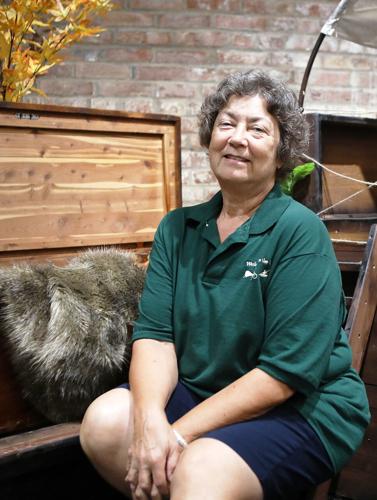 Toni Cavin, owner of WashMO on the Go, sits in a boat display about the Lewis and Clark expedition located in her business Sept. 7. The recently opened business is part local history museum and part store.

Pictured above, WashMO on the Go Sept. 7 at Rennick Riverfront Park. The business operates inside the historic Waterworks Building.

Wilhelmina “Billie” Haddox peers into the fish tank at WashMO on the Go Aug. 24. The display informs visitors about fish in the Missouri River.

Toni Cavin, center, helps troubleshoot the register system Aug. 24 at WashMO on the Go as Cassidy Desmond, left, buys a shirt during the grand opening.

Items for sale are displayed at WashMO on the Go Sept. 7. Many of the wares come from local Washington businesses.

From the street, the Waterworks Building in James W. Rennick Riverfront Park looks much the same as it did when vacated several years ago. But stepping inside the historic building, which was constructed in 1888, there’s no mistaking that the building has been transformed into WashMO on the Go. Few traces of the past 134 years that passed before the renovations remain in the interior.

Gone is the drop ceiling that once covered the trusses that feature elaborate carvings.

“I love old buildings, because they weren’t made cookie-cutter. They were made to last, and they were made with such care and detail that you just don’t see today,” said Toni Cavin, owner of WashMO on the Go. Four tree stump carvings of an owl, eagle, fish and squirrel have been added to the building’s decor. The carvings, which were done by Montgomery City-based Robinson Carving Co., were made from trees that were cut from the riverfront park. Cavin said “the carvings deserve to stay with the building because the trees had been here for so long.”

“Again, I just love old buildings and I love that feeling you get when you step inside of them and feel like you’re walking in someone else’s footsteps,” Cavin said. WashMO on the Go is Cavin’s latest business venture.

She previously worked as a seamstress, owned a crafts and decor store in downtown Washington, and owns Vino Di Lafayette, a Tuscany-inspired open air wine garden at 309 Lafayette St. Vino Di Lafayette, which opened in 2018 following extensive renovations. A native of St. Louis County, Cavin also worked as a 911 dispatch supervisor before beginning her retail career.

Cavin said she and a group of friends and contractors worked eight to 10 hours per day for nearly five weeks to get the historic building ready for its opening on Aug. 24.

“I was determined that I was going to get this done before the summer tourism season ended and we did it,” Cavin said. She said she invested $80,000 into the renovations of the building, in addition to the $426,400 the city of Washington invested that included tuckpointing the exterior, capping the chimney, refurbishing the exterior doors, replacing several windows on the main floor, and painting the wood trim around the doors and windows. The city-funded renovations were partially paid for using capital improvement sales tax revenue and revenue from the downtown tax increment financing district, known as a TIF, and were completed by S-K Contractors, one of four bidders on the project.

Cavin’s rent payments of $34,152 per year over the next five years, which is the length of her lease, will be used to recoup the city’s renovation costs, according to Washington officials. Cavin’s rent payments will increase each year, based on the cost-of-living adjustments for the St. Louis metro region as determined by the Consumer Price Index and the Bureau of Labor Statistics. Cavin’s lease has the option to be extended for an additional five-year period.

On Wednesday, Cavin said she was pleased by the building’s refreshed appearance. And she isn’t the only one.

“I was extremely pleased and excited by the whole complete project,” said Downtown Washington Inc. Executive Director Tyler King. “Just to see the difference the renovations made on the interior is incredible.”

As WashMO on the Go nears its one-month anniversary, Cavin said she is looking to the future, especially the possibility of the Rock Island Trail one day connecting to the Katy Trail through Washington, the return of a normal Amtrak train schedule, and flooding along the Missouri River.

“Water has been in the building four times, but 1993 was definitely the worst when three feet of water was in the building,” Cavin said. She said the threat of flooding, while daunting, didn’t dissuade her from opening a store along the riverfront where Lucinda Owens founded the city years ago.

“I think she would be a bit flabbergasted by how Washington has grown, but hopefully she would be pleased that we are working to retain our history and to give new life into these old buildings,” Cavin said. “She definitely has a city to be proud of.”

Cavin said the response to the new business has been good, with between 24 to 50 different customers visiting WashMO on the Go per day. The store is open seven days a week from 9 to 5 p.m. and will stay open later when there are large events or festivals in the Riverfront Park. The store can accommodate large tour groups, though Cavin said they should call ahead to schedule a tour. WashMO on the Go’s phone number is 636-283-5019.

“Right now, we are seeing two different groups of customers. We are seeing the curiosity seekers. The people who live here in Washington, who have been in the building when it was an antique store, and who are simply coming to see what we’ve done to the building or what we have here. Then, we also have a bunch of people who are here from out of town and are coming in to learn more about Washington,” Cavin said.

She said the response from the latter group is evidence that her gut feeling about Washington’s riverfront was right.

“I’ve always thought that when people from out of town come here, that they head to the river. To them, the riverfront is Washington’s front door,” said Cavin, who said she hopes WashMO on the Go can be a launching pad for visitors to find more reasons to return to the city.

“Yes, this is a business, but our goal is not to have people only spend money here,” Cavin said. “Our goal is to provide people with a sampling of what they can find in our city and to give them a reason to go explore it more.”

Washington Community and Economic Development Director Sal Maniaci said WashMO on the Go is a “great asset to the community.”

“We are excited to have WashMO on the Go open along our city’s riverfront,” Maniaci said. “It is a great amenity for tourists, but also for visitors to the riverfront park who may be heading out to fish on the river or bike on the trail. It is definitely something we are glad to have here.”

King agreed, saying that “all businesses will benefit” from WashMO on the Go.

“It really is a space that gives you a little bit of what Washington has to offer,” King said.

An avid visitor to our national parks system, Cavin said she knows firsthand how beneficial having a welcome center can be for visitors. Cavin and her husband have visited more 130 national parks together.

At each national park, Cavin said she always makes stopping at the welcome center a priority.

“We always go there looking for information about where to stay, where to eat, but also to learn something neat about the place that we are visiting,” said Cavin, who has incorporated aspects of the various welcome centers she has visited into WashMO on the Go.

To that end, Cavin said she called upon 30 different businesses to bring a portion of their products and wares or flyers about their location to WashMO on the Go.

“I’m a member of the (Washington) Rotary Club, Downtown Washington, and so I know people and as I would talk about this to people everyone wanted to be involved. I didn’t have to twist any arms at all,” Cavin said. Today, businesses represented at WashMO on the Go include: Revolution Cycles, Neighborhood Reads, IB Nuts & Fruit Too, Kim’s Candy Dish, Scudder & Co. and many others. A number of local artists and photographers, including Gary Lucy, Bryan Hayes, Tammi Elbert, and others also have art in the store.

“It is very exciting to see it all come together. We were certainly hoping to get this kind of positive reaction, but it is also a lot of pressure,” Cavin said. “It is the pressure of making sure that people leave here thinking that we have represented Washington well.”