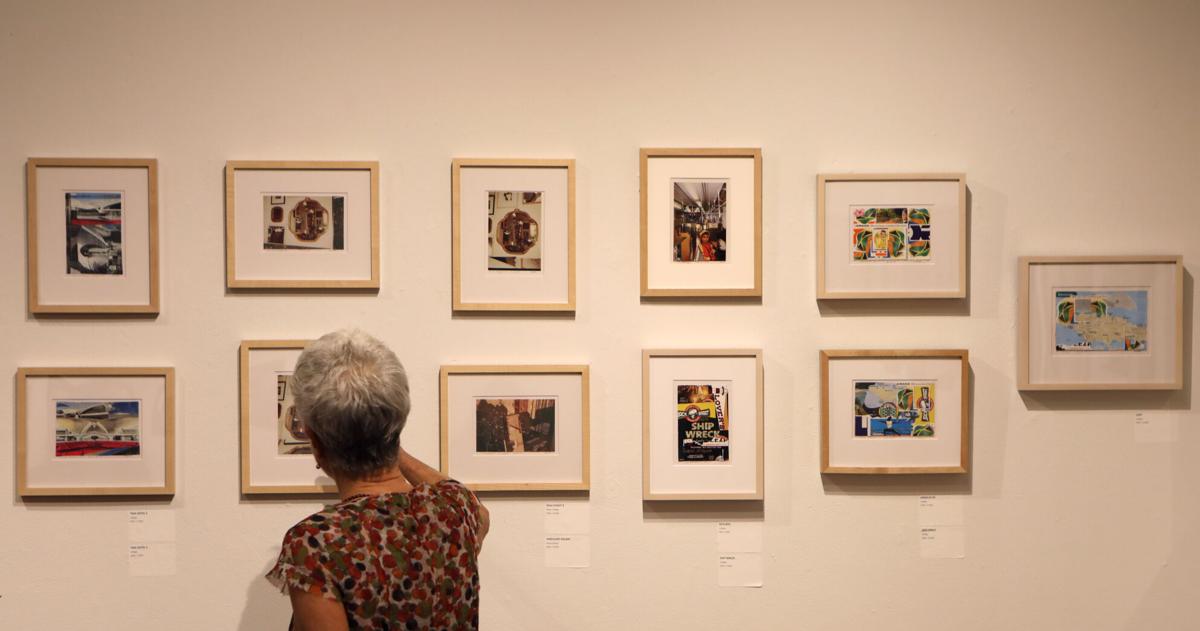 Sally Dill takes a closer look at some of her artwork June 28, 2021, during an interview about her exhibition. Dill's style is playful collage work, which blends photography, fabric, paper and found objects. 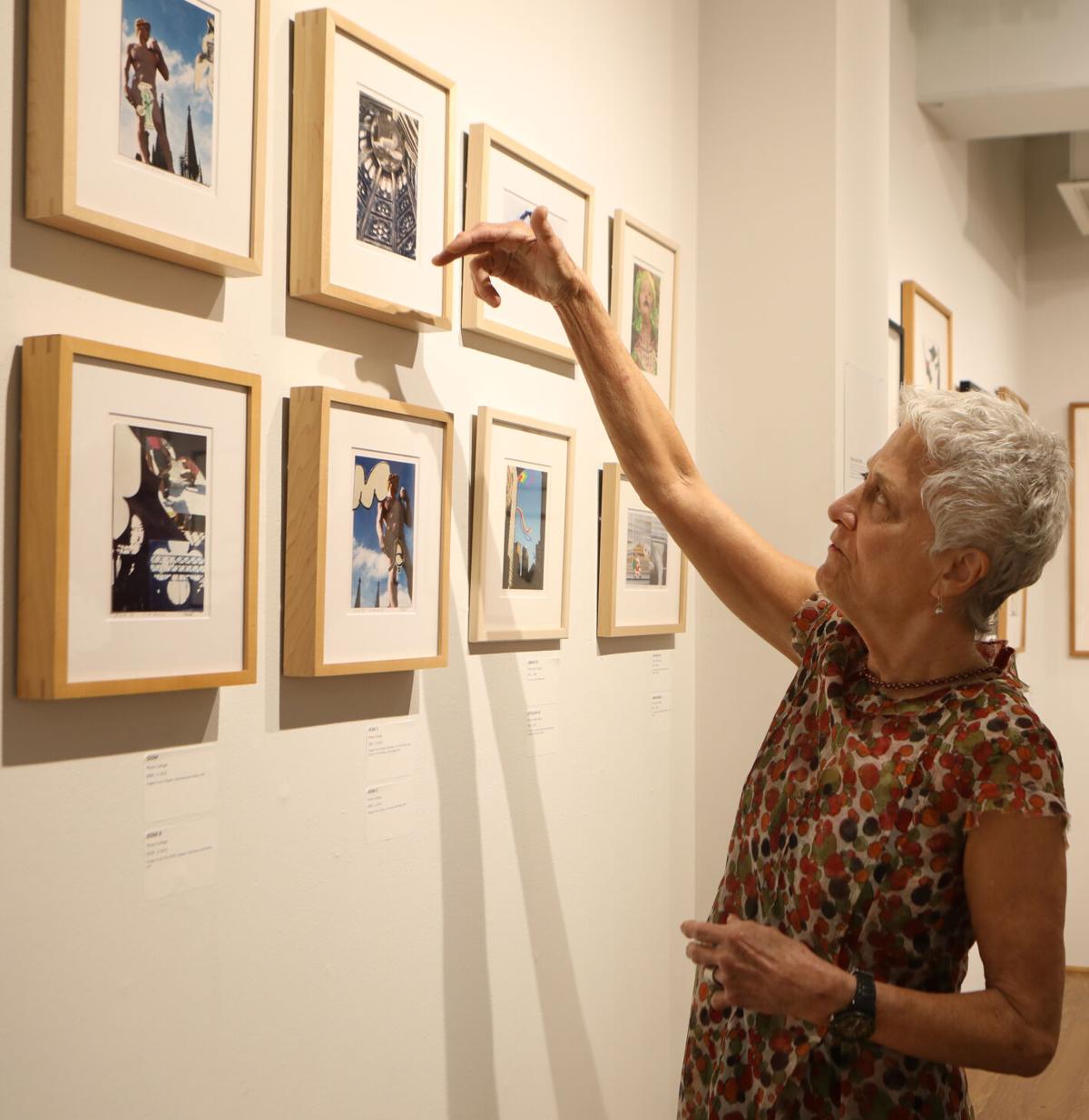 Sally Dill points to some of her work during an interview June 28, 2021, at East Central College's art gallery. Dill is based in New York City but grew up in Krakow. 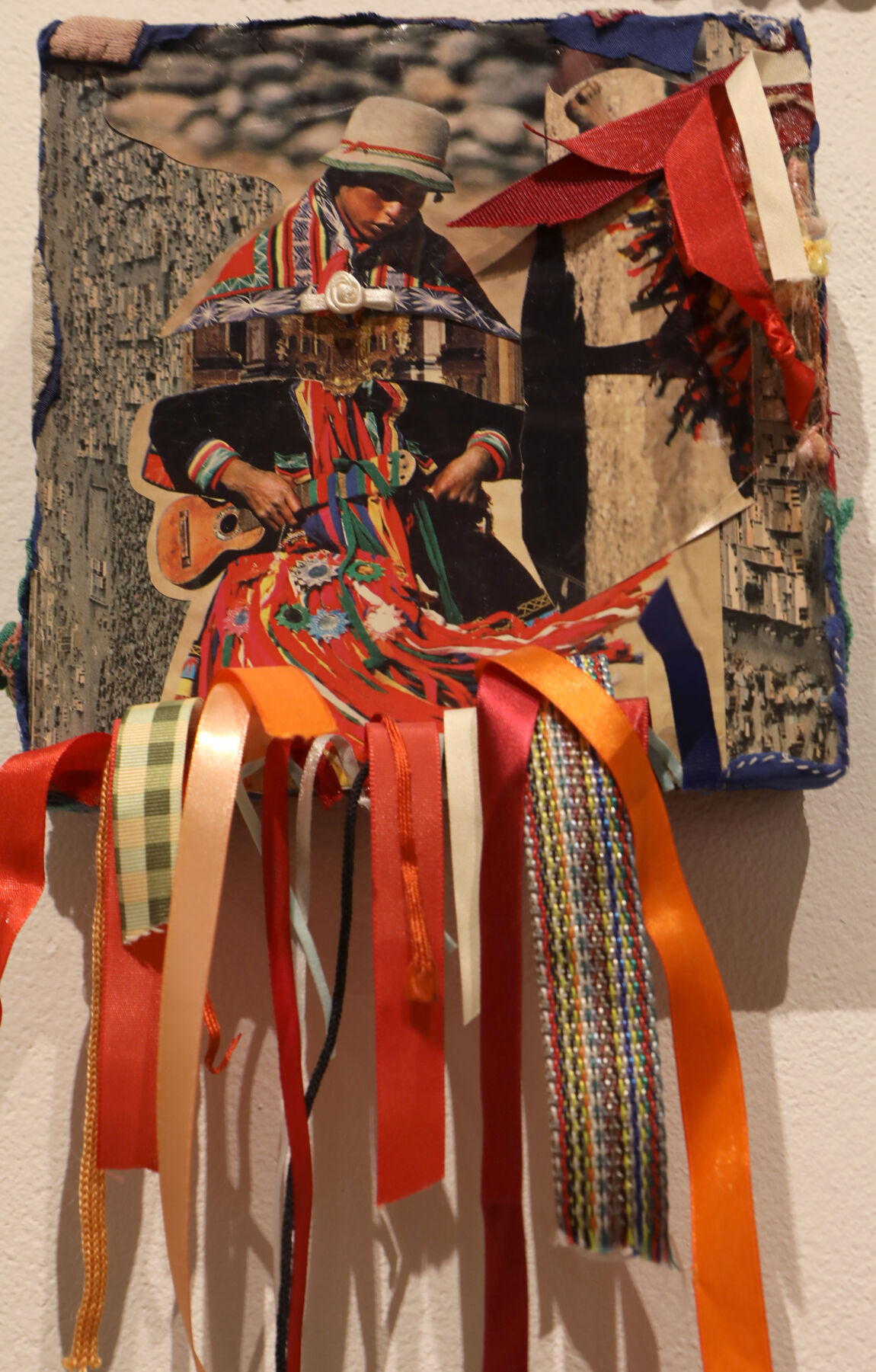 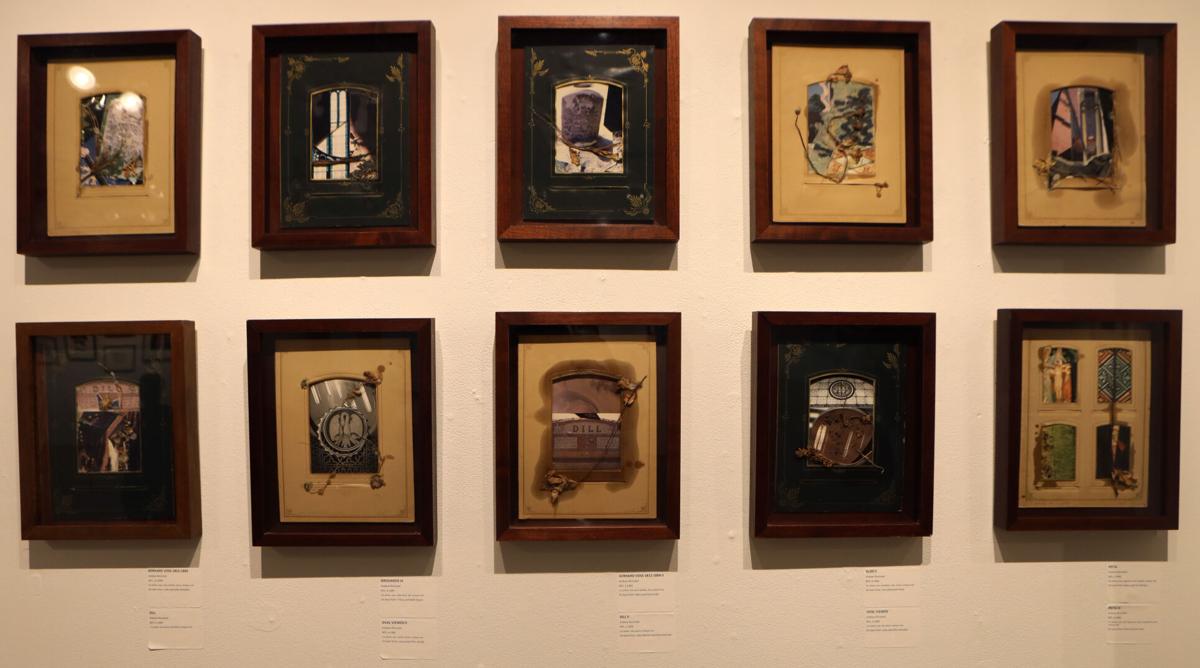 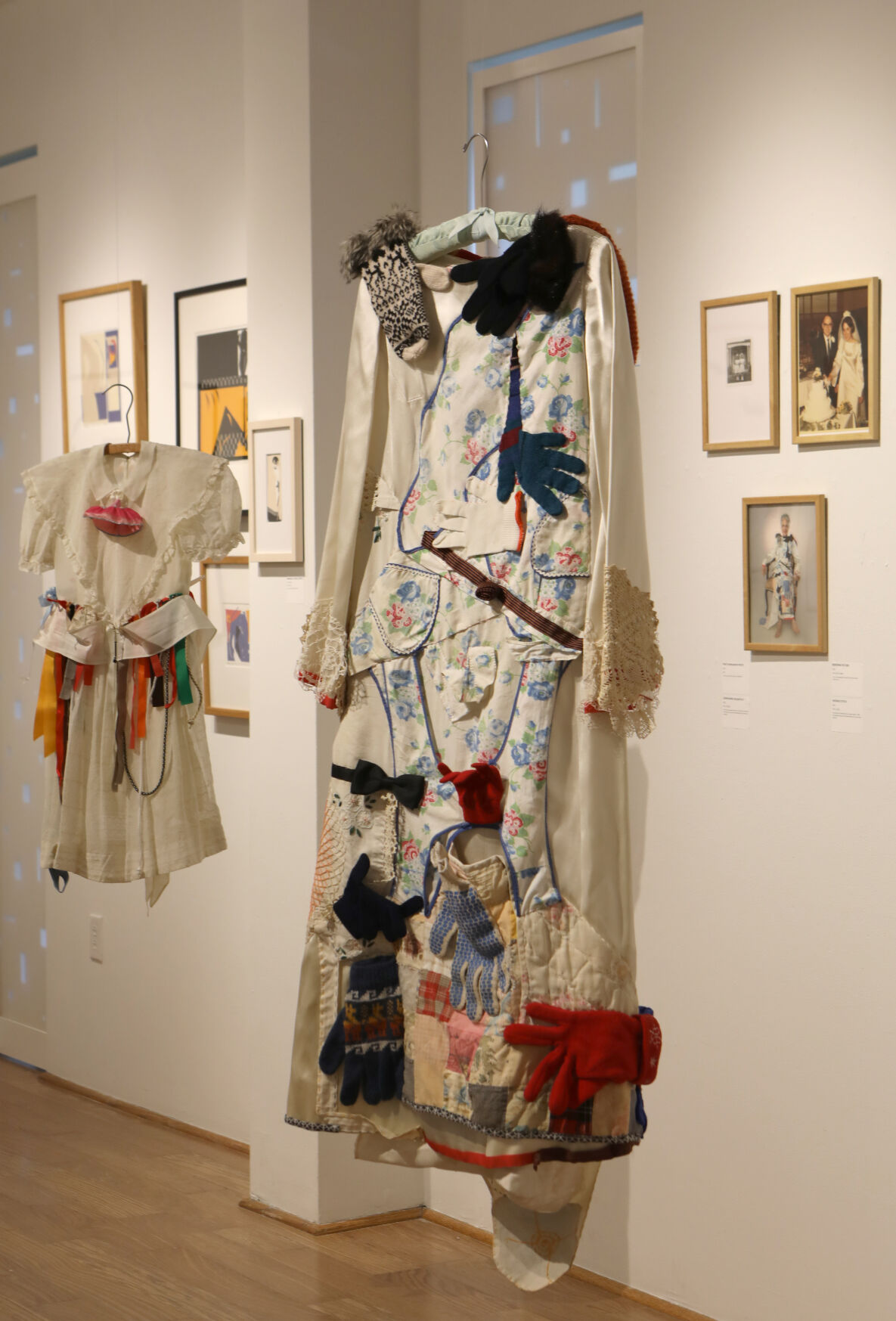 Two of Sally Dill's pieces, "Comuning Wa(i)stFULLY," left, and "Wedded Stitch," hang in the East Central College art gallery June 28, 2021. One piece is made from Dill's First Communion dress, which she wore at St. Gertrude Parish in Krakow in 1950, and the other is her wedding dress, a 1968 Vogue pattern silk dress with altered sleeves. 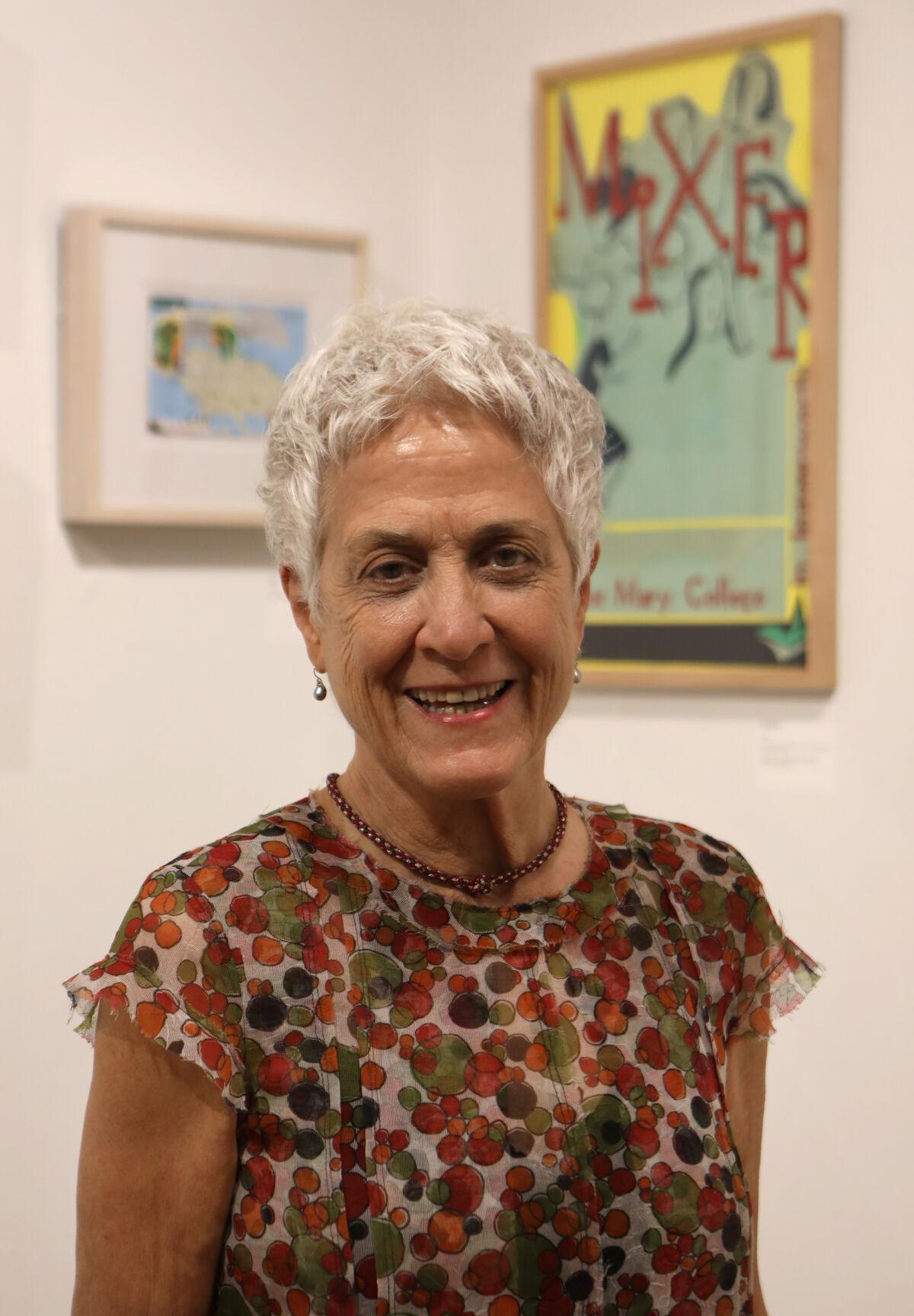 Sally Dill takes a closer look at some of her artwork June 28, 2021, during an interview about her exhibition. Dill's style is playful collage work, which blends photography, fabric, paper and found objects.

Sally Dill points to some of her work during an interview June 28, 2021, at East Central College's art gallery. Dill is based in New York City but grew up in Krakow.

Two of Sally Dill's pieces, "Comuning Wa(i)stFULLY," left, and "Wedded Stitch," hang in the East Central College art gallery June 28, 2021. One piece is made from Dill's First Communion dress, which she wore at St. Gertrude Parish in Krakow in 1950, and the other is her wedding dress, a 1968 Vogue pattern silk dress with altered sleeves.

In the mid-1900s, neither St. Gertrude School nor St. Francis Borgia Regional High School offered formal art classes — but by the time artist Sally Dill graduated in 1962, she knew what she wanted to do with her future.

She wasn’t discouraged from the arts, she said; she has fond memories of making chalk creations on the blackboards during holiday celebrations. But most often, she had to find ways to involve artwork in her daily life, classes and assignments.

“If I had to write a paper or else make a replica of the Shakespeare theater, The Globe, I made a replica,” she said. “I would just create something artistic in a visual way opposed to writing.”

She added, “I wasn’t going to major in English,” emphasizing the last word with a revulsion she does not have toward snake skins, body hair or dirt, all reappearing materials in her creations.

Dill, now 77, is a New York City-based artist who grew up in Krakow. She has displayed in 40 states around the country as well as in Montreal, Canada, since she made her debut in 1988. She also has been a signature member of the National Collage Society since 2000.

Her abstract work has returned home in the exhibit “ ‘Pieces’ Playful Collage Works,” which opened at East Central College July 1, and a selection of her pieces derive from her roots in town. The free art show is located in the Art Gallery in Hansen Hall through Aug. 27.

Her work, her origin

Dill makes paper cutouts and mixed media pieces, notably collages of St. Gertrude Parish images in her “Krakow Revisited” collection, which is included in the exhibit.

In the collection, 10 paper-based pieces line the southeast wall of the gallery. Some spotlight St. Gertrude’s stained glass windows, the building’s stone exterior or her family’s tombstones, all displayed through fragmented photographs. When she took the photos, she gathered nearby dandelions, spirea and dirt, which she attached to the works.

Her great-great-grandfather Gerhard Rensman Voss helped build St. Gertrude, so her work celebrates the church’s and her family’s history, as well as their connections to the community, she said. Her focus on religious iconography can be traced to her parochial education.

“It was a very important, memorable time of my life, growing up in that community,” she said. “... Our teaching would be one sister. She would take one class, and meanwhile, we could play around or whatever, create havoc.”

Half a century later, Borgia’s art program has grown tremendously, visual arts teacher Kelly Mantle said. Between 120 and 150 students take the seven to nine visual art classes per year. That is roughly a quarter of the school’s population, she said.

“Each person that came in probably came in with a vision of how to make things bigger and stronger and grow even more from the program that was already established,” Mantle said. “So it started out very small, and I think it just grew with each new art teacher.”

Mantle, who started working at the school four years ago, is focused on growing the ceramics program during her tenure at the school. The teacher before her, Rae Slayton, added wood carving into the curriculum. Before her, calligraphy was incorporated into the lesson plan.

She doesn’t know when the first art class was offered, Mantle said, but “it’s kind of been a slow development to where it is today.”

Mantle also attended Borgia grade and high schools in the early 2000s, and her own parochial education dictated her future, much like Dill’s, just 50 years later. Because of her teachers and studies, Mantle knew by her freshman year that she wanted to have a career in the arts, she said.

As for Dill’s ability to find art projects without a class in the subject, “that’s incredible,” Mantle said.

Passing on the lessons learned

Dill’s ability to create art from regular life also could be related to her father, Herb, she said, who worked as a local plumber. She recalled the time he created a copper chandelier for the Borgia senior ball simply because the organizers wanted one.

As Dill’s and her dad’s experiences exemplify, “we can all be creative with where we are,” she said.

Now Dill’s show, in turn, will be used to educate the next generation of local artists, this time in an official education setting, said Jennifer Higerd, art gallery curator and assistant art professor at ECC.

In addition to it being open to the public, students in ECC art classes will walk to the gallery space to study Dill’s use of shape and line as part of their curriculum.

“Art can be that way to get to travel and to get to put ourselves in her shoes for a little bit and try to experience life in the world the way she did, by looking at what she’s made throughout her life,” Higerd said.

Dill herself spent time as an art teacher on and off in Blue Springs, Kansas City and New York City from 1967 to 2001, and she started honing her paper collage technique in 1988.

Her artist evolution is available to view, as the entire show features work that expands beyond her “Krakow Revisited” collection. The pieces cover the past 30 years of Dill’s life, plus three works from her college days in 1965; the content delves into fragmented vacation scenes and mismatched cloth collages atop her First Communion and wedding dresses. The exhibit will be open 8 a.m. to 8 p.m. Mondays through Thursdays and 8 a.m. to 5 p.m. Fridays.

When observing the work, there’s one thought Dill hopes people take away: “We all have creativity in us,” she said.

East Central College has received the largest donation in its history — $5 million.