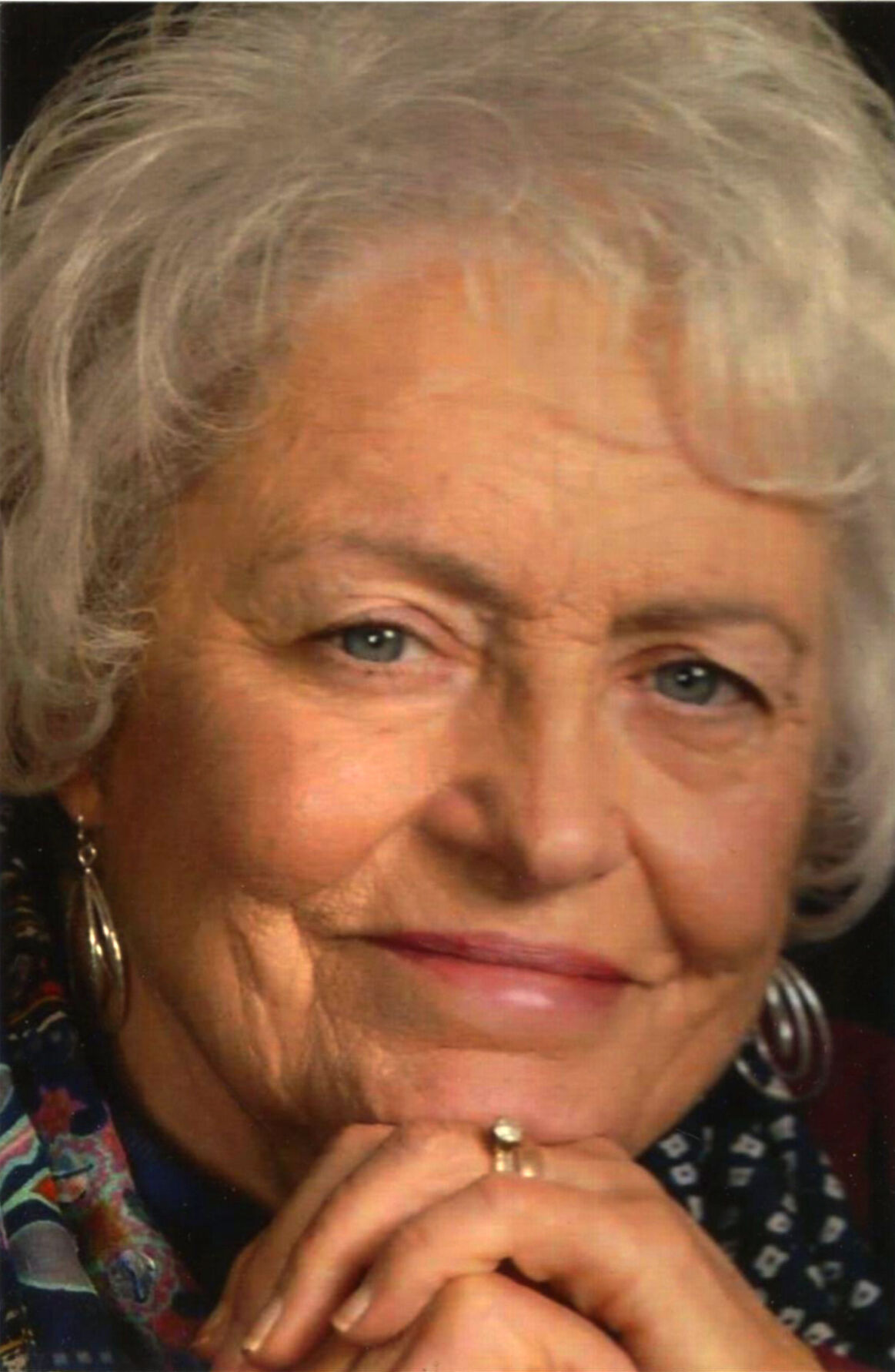 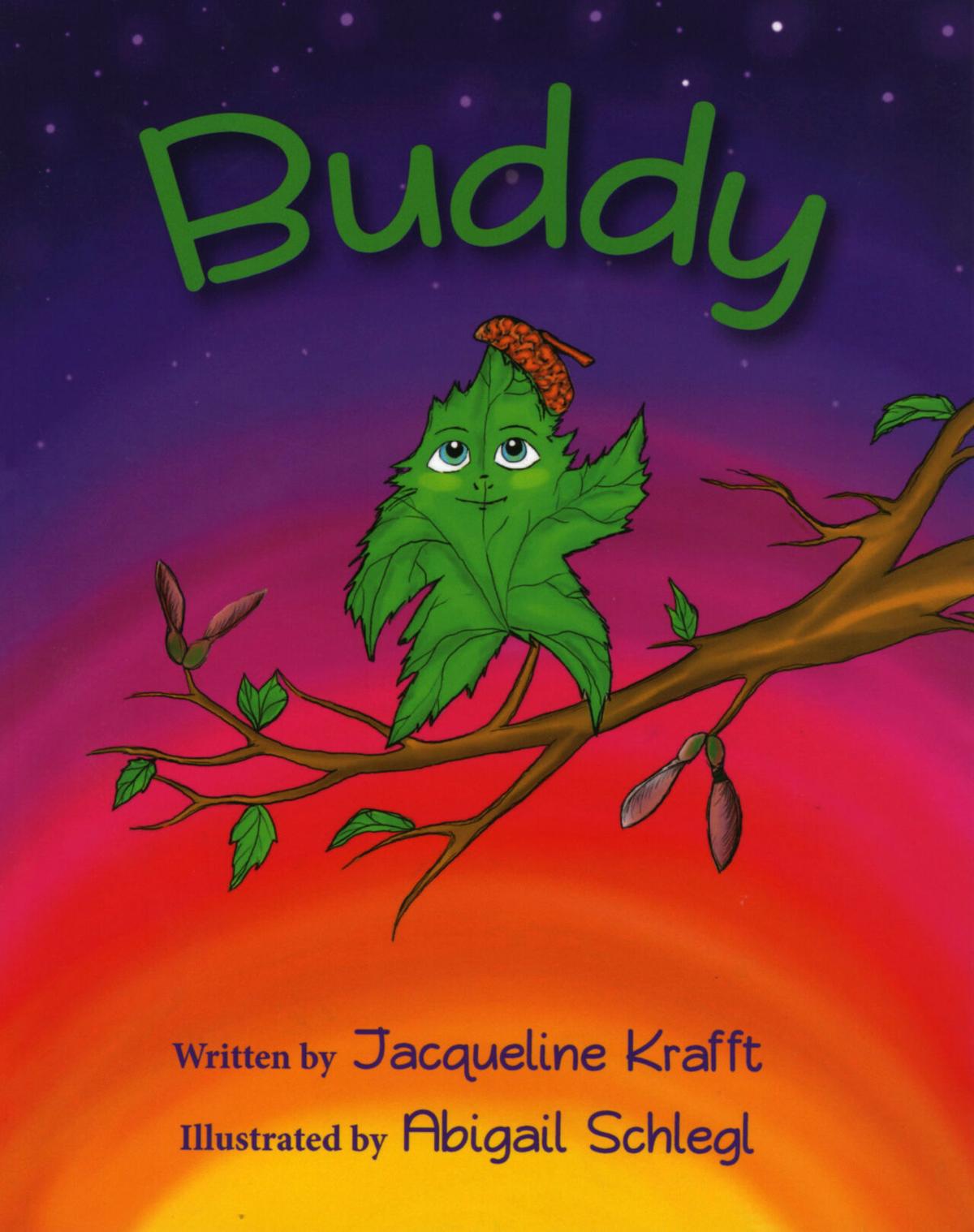 The cover of the Children's book 'Buddy' by Jackie Kraft. 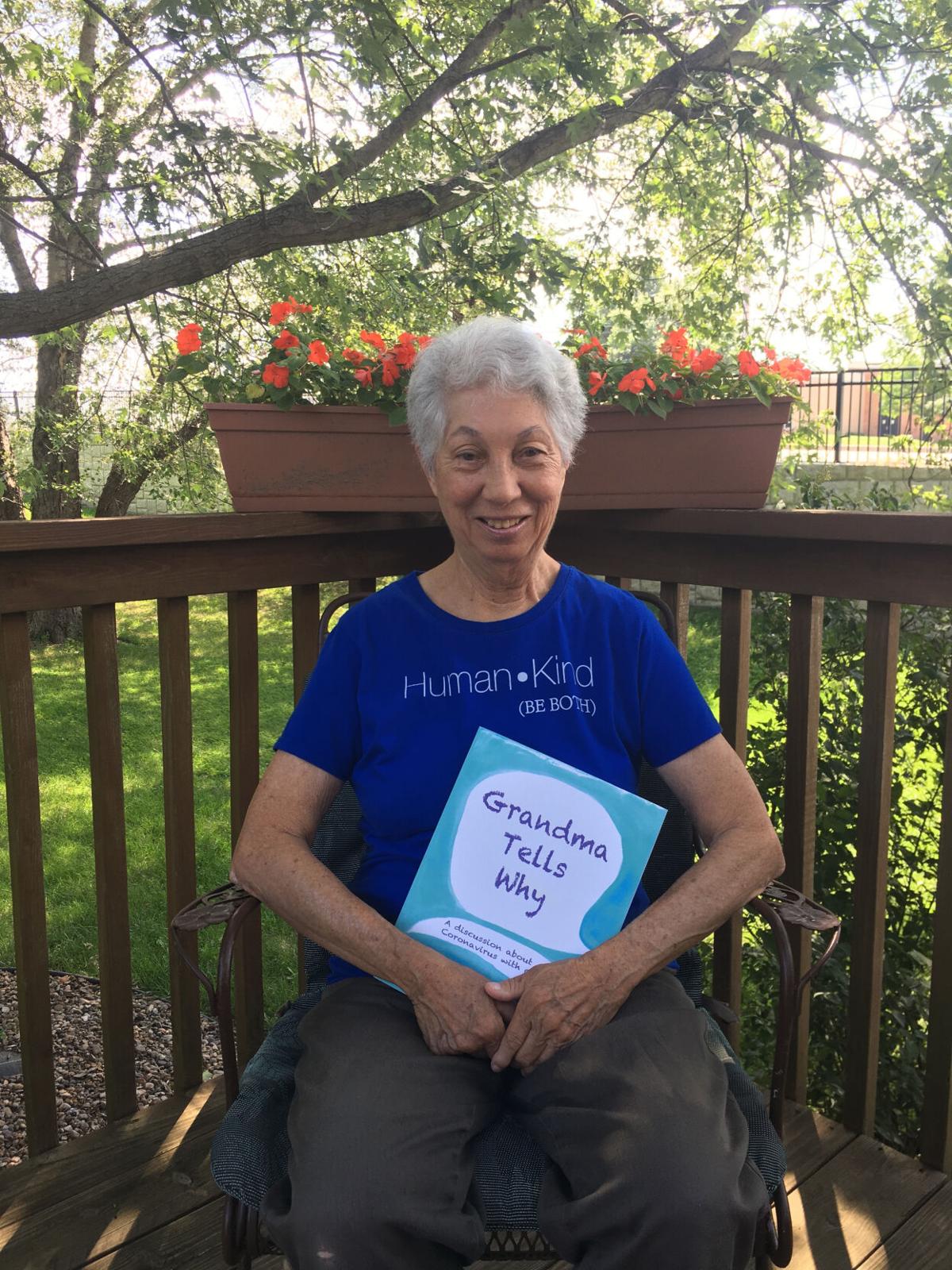 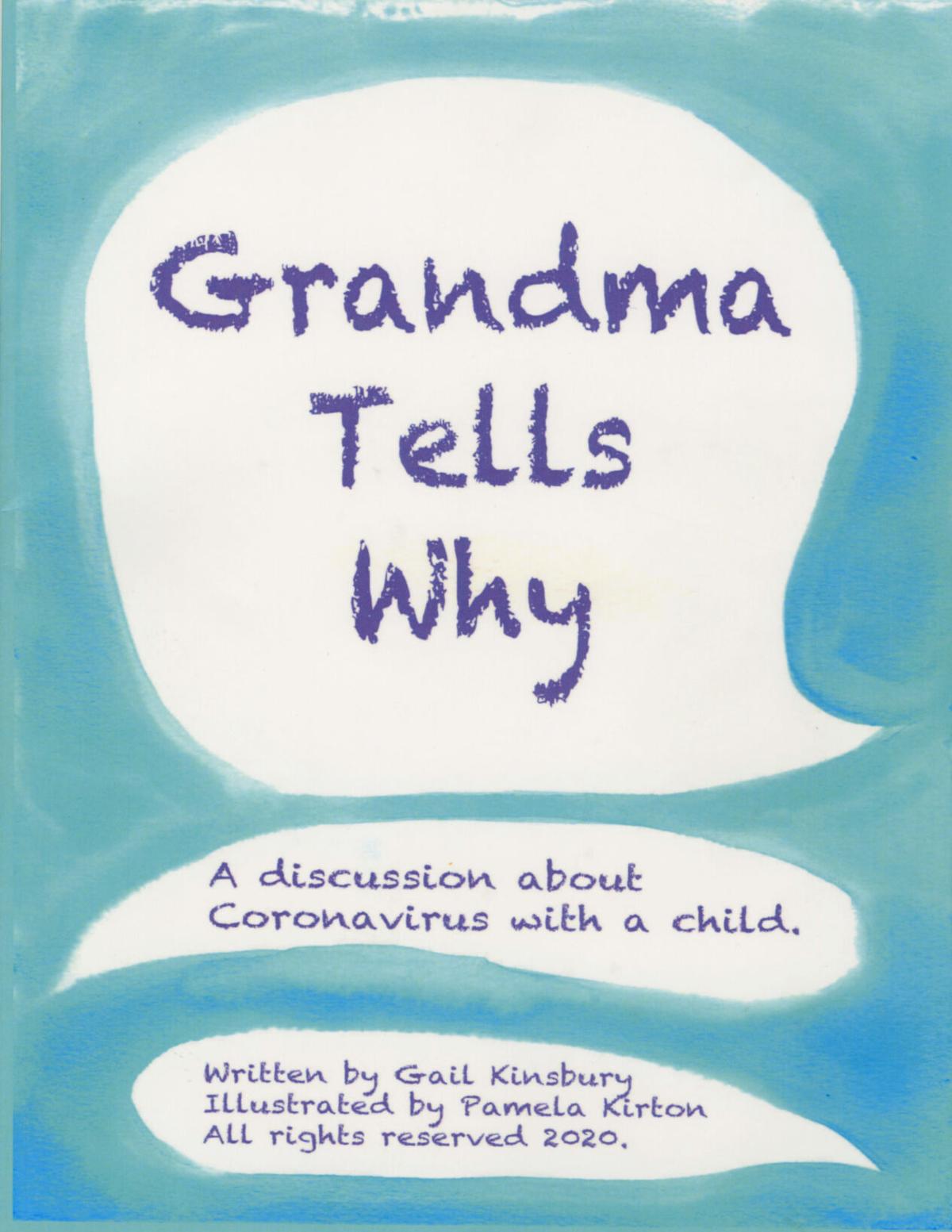 The cover of 'Grandma Tells Why' by Gail Kingsbury. 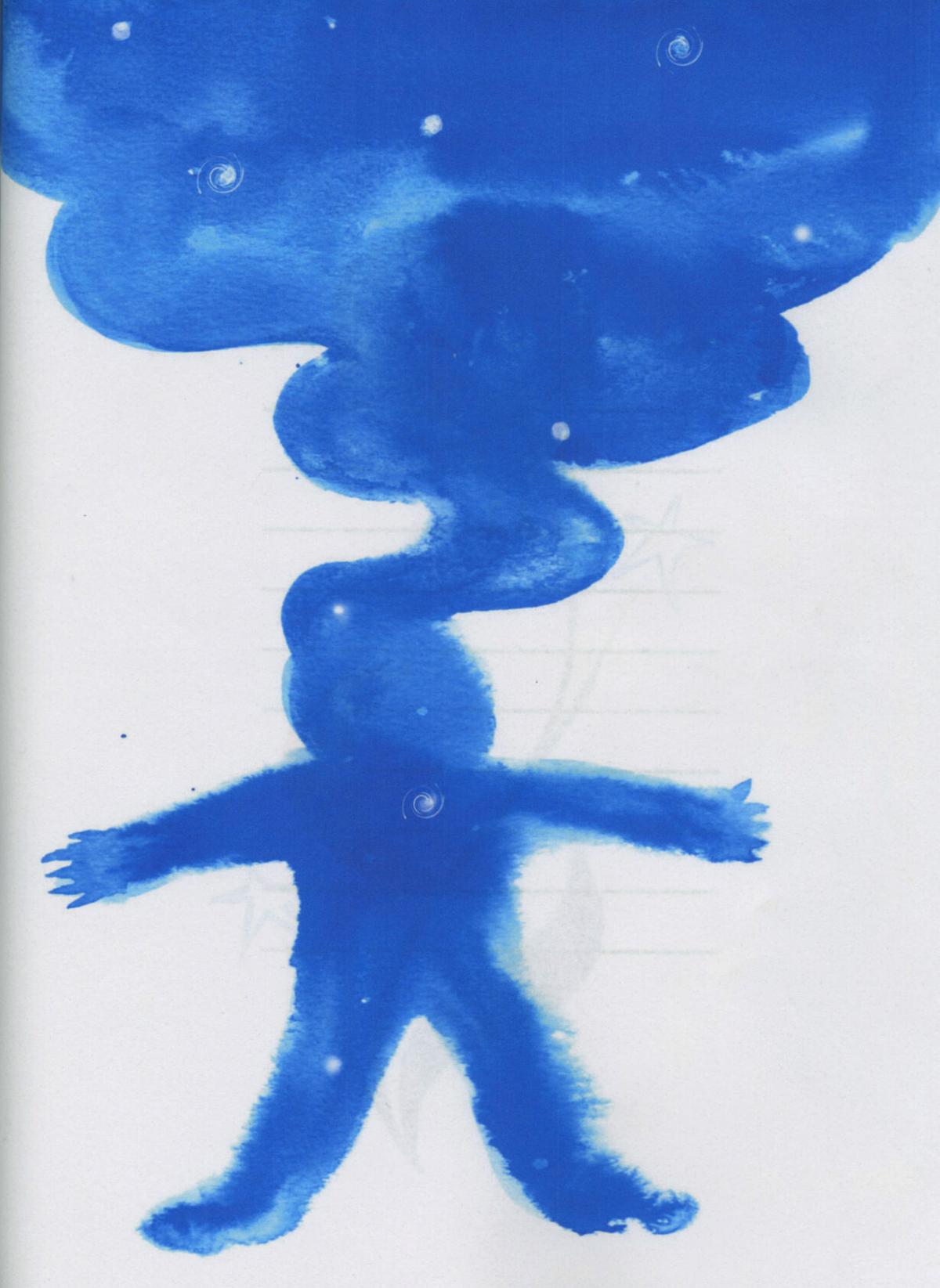 An inside photo from 'Grandma Tells Why' by Gail Kingsbury which was printed on a flag and flown at Rockefeller Center in New York City. 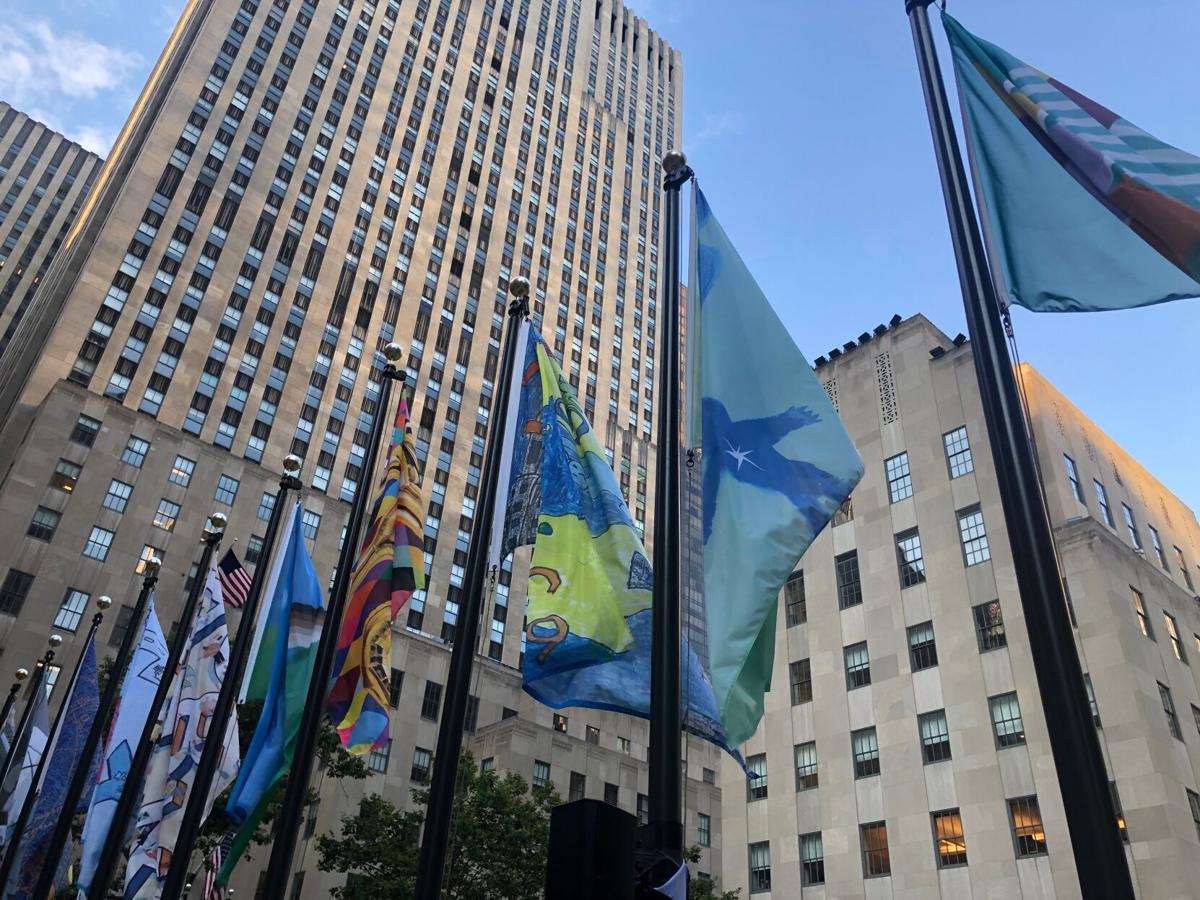 Printed on the flag second from the right, is a copy from a page in Gail Kingsbury's book 'Grandma Tells Why'.

The cover of the Children's book 'Buddy' by Jackie Kraft.

The cover of 'Grandma Tells Why' by Gail Kingsbury.

An inside photo from 'Grandma Tells Why' by Gail Kingsbury which was printed on a flag and flown at Rockefeller Center in New York City.

Printed on the flag second from the right, is a copy from a page in Gail Kingsbury's book 'Grandma Tells Why'.

The year was 1968. Bell-bottoms and tie dye were growing trends. The first Big Mac hit the McDonald’s menu for 49 cents. The Beatles released “The White Album.” And Jackie Krafft was teaching kindergarten at South Point School with aide Gail Kingsbury. Fast forward 52 years later, both women are in their 80s and have recently become first-time children’s book authors.

Krafft and Kingsbury haven’t kept in close contact through the years, and both were surprised to hear the other was also self-publishing her first book. The books’ subjects vary greatly, as do the women’s journeys to authorhood after age 80.

Krafft’s “Buddy” is the tale of a young leaf experiencing the changing seasons, and his changing color. Buddy initially struggles to accept his new colors, but he learns to lean on his friends and family for support. The book is illustrated by Abigail Schlegl, a family friend who already has two other books to her name and is a student at Saint Louis University. “Buddy” was published in May 2020 in paper and hardback.

Krafft said she has been preparing to write this for nearly her whole life, although she didn’t know it at the time. The book contains memories and moments — such as the time she and her grandmother watched a rainstorm from their front porch swing and her grandma said the droplets were “like millions of itsy-bitsy ballerinas dancing” — she has collected over the years.

Her own favorite children’s books, such as Kate DiCamillo’s “The Miraculous Journey of Edward Tulane,” inspired her to add harder vocabulary in “Buddy” to stretch her readers.

She typed the book in spurts on her computer, adding a few lines whenever she felt like it until she had a nearly completed story, although she was convinced no one would want to read it.

The push to publish came from her daughters. They recognized the amount of teaching moments she shared in the story, and also her importance to the Washington community. After graduating from the University of Missouri-Columbia, Krafft taught kindergarten at South Point for 25 years. Her annual witch costume on Halloween is still a fond memory for adults who were once scared students. Some of those former students now bring their grandchildren to Jackie’s house for trick-or-treating, where she still donned a witch costume every year until last year.

“Every year, every class was important to me,” Krafft said.

Although this is Krafft’s first solo book, she contributed a short piece to “My Washington: Photographs and Reflections.” In the text, Krafft discusses how that town reminds her of the song “I Love Those Dear Gentle Hearts” because people are friendly and help one another.

Recently Krafft was in her kitchen when the idea for a second children’s book came. She was at her table looking out her window. Her dogwood tree was in full bloom, and the green of the surrounding trees framed the sparkling Missouri River. It occurred to her that God’s favorite colors must be green and blue, and then it occurred to her that “God’s Colors” would make a great story for preschoolers.

She said she doesn’t know how long that book will take to write, but for now she’s excited for people to read about Buddy the leaf.

“All of the sudden I see my books flying through town,” Krafft said. “I love my little town.”

Unbeknownst to Krafft, as she was writing “Buddy,” her former kindergarten aide Kingsbury was also writing her first book. Kingsbury, who grew up in Washington and was a high school teacher in Kansas City for 30 years, recently published “Grandma Tells Why: a Discussion About Coronavirus With a Child.” Her book started as a way to help children, particularly in her own family, remember this unique moment in history. Members of Kingsbury’s family have missed graduations and a senior trip to New York City. She has been unable to hold her first great-grandson, born in June. When her grandchildren visit they sit on the back deck and talk through masks. She said they kept asking her “why,” and she didn’t know what to tell them.

“I’m of the persuasion that if you write it down, it helps,” Kingsbury said. “Every page has room for a child to journal.”

The second half of the book takes on a more somber tone. The fictional grandchildren ultimately lose their grandfather to COVID-19 and ask Grandma why. The book includes a page for readers to write about some people they want to remember. Kingsbury said it was important for her to write about the loss that some families are experiencing from the virus.

“I put that in the book because it’s happening to people every day,” Kingsbury said. “That’s life, that’s something people are dealing with.”

The book is illustrated by Kingsbury’s niece, Pamela Kirton, and it was Kirton who read about a contest at Rockefeller Center in New York City and submitted artwork from the book. Her piece was one of 193 winners, from more than 1,000 entries, selected to be recreated on a flag and fly over the iconic rink. “The Flag Project” art installation ran Aug. 1-23. As part of the entry, Kirton wrote of the piece: “Tomorrow we may realize how we came from stardust. Wouldn’t it be great if we were all the color of the sky? Would we still find reasons to hate each other? This flag reminds us how similar we are.”

Kingsbury said the flag, which the family gifted to her new great-grandson, made the book famous.

“This is one of the biggest events of my life,” Kingsbury said. “I had friends and old students contacting me that the book touched them.”

Some of Kingsbury’s teacher friends in Kansas City plan to add the book to their curriculum for the fall. It’s also available to order on Lulu.com, a self-publishing company.

Kingsbury’s next project, which she’s already started writing, will be an antiracist children’s story. The plot is based on Kingsbury’s grandson’s friend, who is Black and was raised by his grandmother. Throughout the boy’s life, his grandmother comforts him when he is the victim of racist microaggressions. After she dies, the boy, who is by this point a man working toward his doctorate degree, is motivated to make the world a better place, and make his grandma proud. The story moves forward via a talking tree, who reminds the boy that like trees, people have roots. Even when the tree, or the grandmother, is gone, the roots are still there inside.

Krafft and Kingsbury estimate that they hadn’t talked in almost 30 years when they recently caught up over a lengthy phone call.

“It was amazing to talk to her,” Kingsbury said. “It had been ages.”

They were excited to congratulate each other on their first children’s books and even discussed writing a book together.

“I couldn’t believe it when I heard she had a book too,” Krafft said. “It’s incredible.”