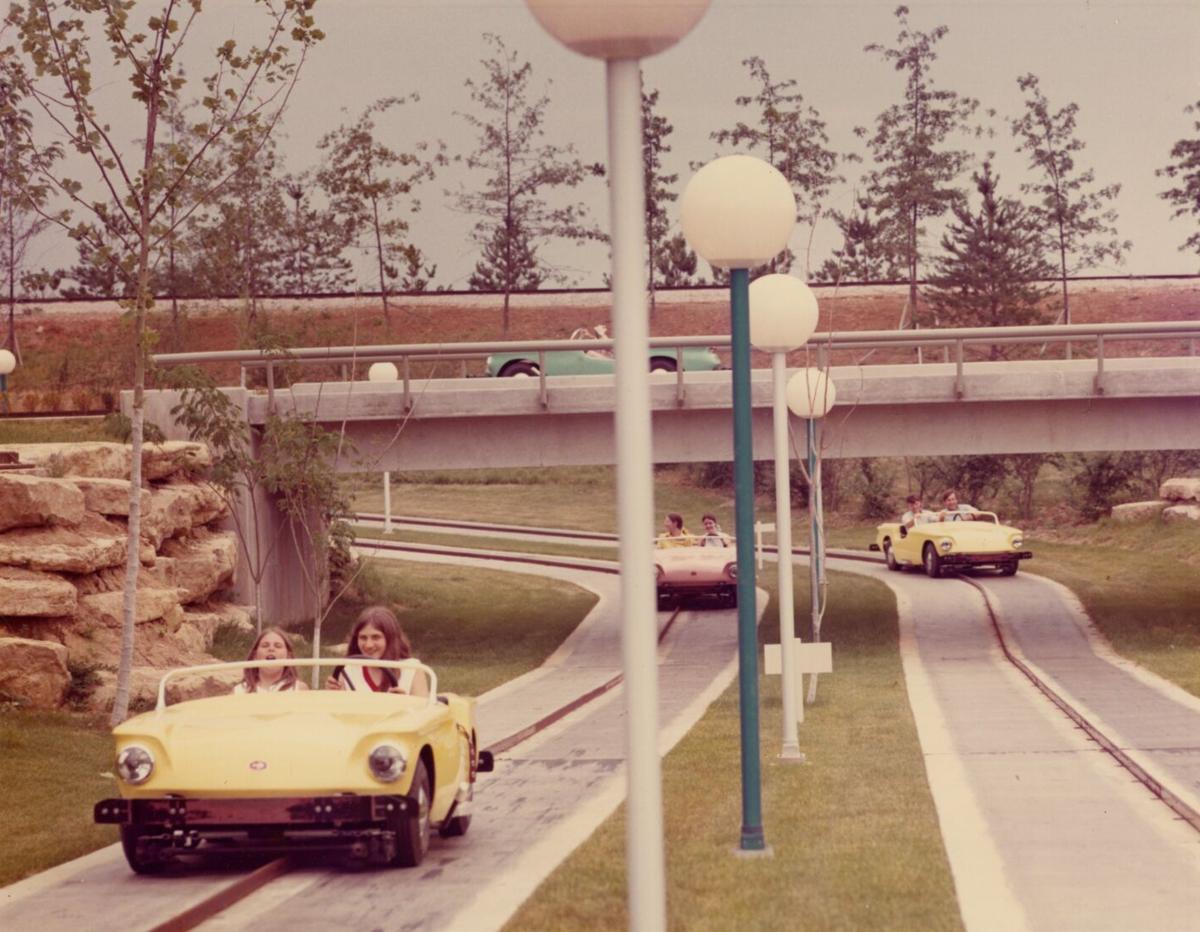 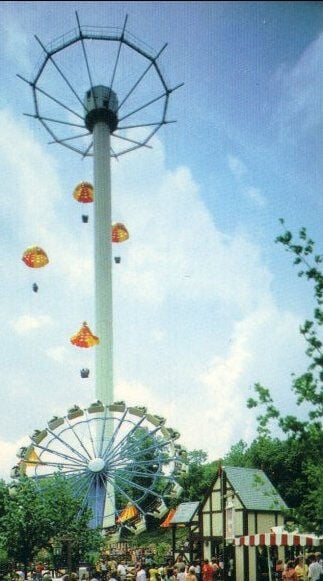 People wander through the Brittania area of Six Flags St. Louis near the Highland Fling ride, which operated from 1977 to 2017. 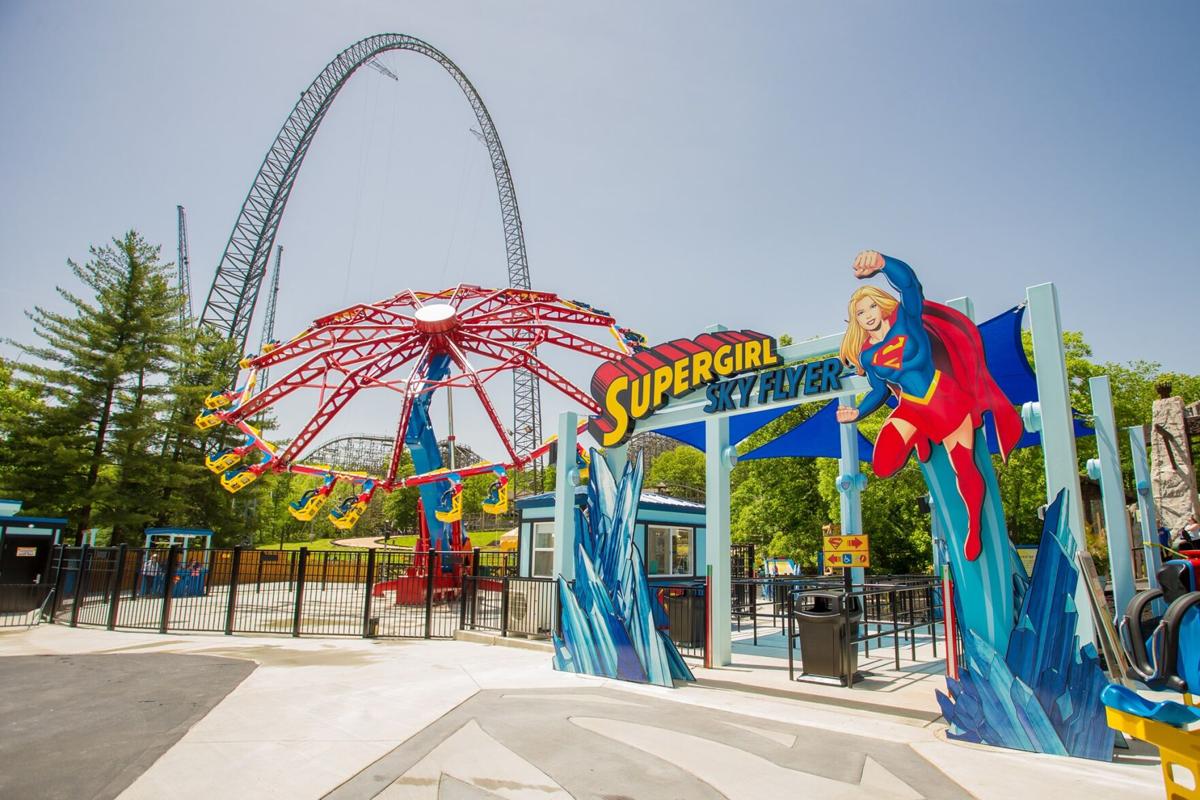 The Supergirl Sky Flyer ride stands ready for visitors at Six Flags St. Louis. The ride was introduced in 2019. 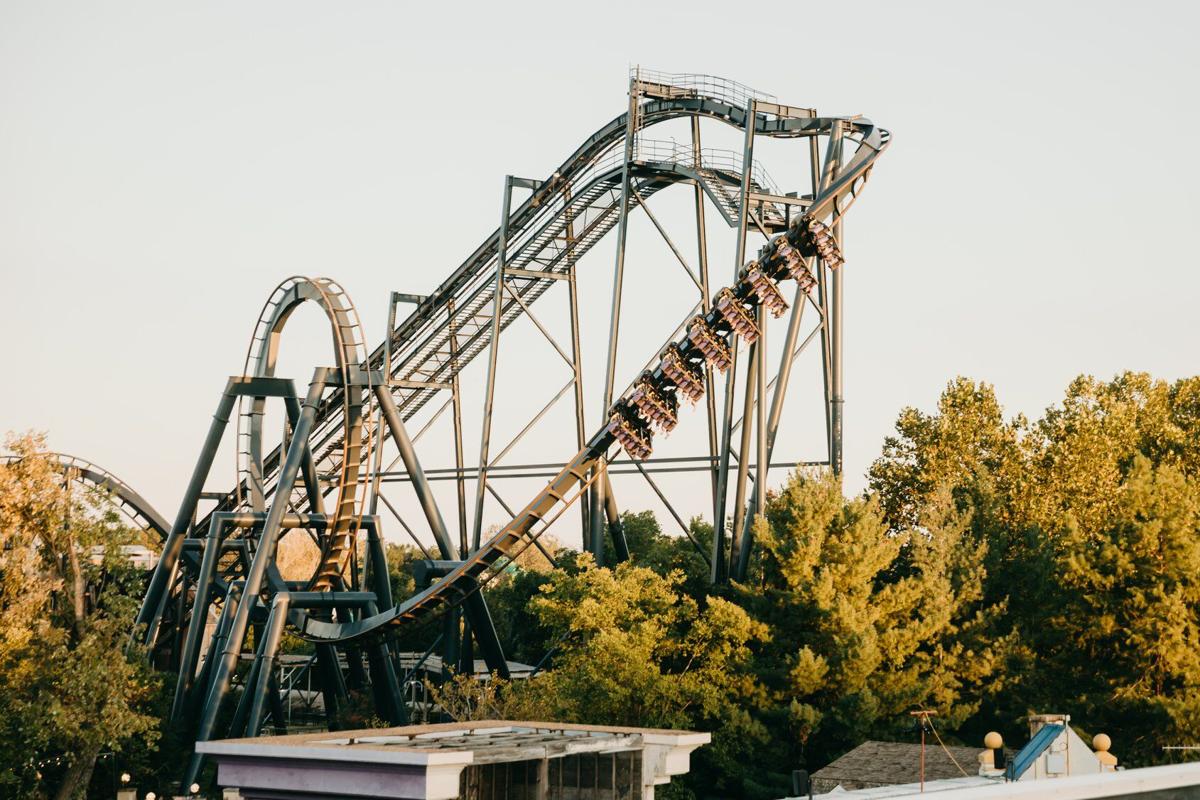 Riders hurtle through the twists and turns of Batman at Six Flags St. Louis. The ride was introduced int 1995.

People wander through the Brittania area of Six Flags St. Louis near the Highland Fling ride, which operated from 1977 to 2017.

The Supergirl Sky Flyer ride stands ready for visitors at Six Flags St. Louis. The ride was introduced in 2019.

Riders hurtle through the twists and turns of Batman at Six Flags St. Louis. The ride was introduced int 1995.

For many area residents, the 50th anniversary of Six Flags St. Louis brings back memories of visiting the park as children — the heat of a sunny day in July, the taste and sticky sweetness of cotton candy, the smell of  waffle ice cream cones fresh from the oven.

For others, it’s the exhilaration of soaring through the air on the loop on the Jet Scream, a looping steel ride the park offered from 1981-1986, or the growing sense of anticipation as the coaster car prepares for its freefall drop on The Boss, a wooden roller coaster that was the eighth-longest roller coaster in the world when it opened in 2000 and remains a popular attraction today.

Or maybe just the mere mention of Six Flags sparks memories of plunging into the darkness aboard the River King Mine Train or the twists and turns of the Log Flume, both staples of the park since its opening in 1971.

From Shazam! to Mr. Freeze, there are attractions for beginning thrill seekers and veterans alike, said public relations manager Elizabeth Gotway. Six Flags St. Louis is currently home to 30 rides, and its nine roller coasters are the most of any amusement park in Missouri. Some attractions, like the 180-foot Colossus Ferris Wheel, are familiar classics, while others, like Supergirl: Sky Flyer, have only been around for a couple years.

Six Flags St. Louis opened June 5, 1971, as Six Flags Over Mid-America, the third of the original three Six Flags parks conceived by founder Angus Wynne. It followed Six Flags Over Texas in the Dallas-Forth Worth area and Six Flags over Georgia in Atlanta.

The original entrance price was $6.50, and a dollar cheaper for kids. Today’s admission price is $30, and most visitors are season passholders or members. Gotway declined to release ticket sales information for St. Louis, but 6.8 million guests visited one of Six Flags’ 27 parks in North America last year, a decline of 26 million guests from 2019. Total revenue saw a similar drop, going from about $1.5 billion to $357 million.

The iconic theme park was laid out in six themed areas, each representing an influence on local culture. The architecture, food and rides all aligned with the area’s theme, making for unique feels in different areas of the park.

Now, with expansions and other changes, the park has all but transitioned away from the original six themes. And that’s not the only thing that park visitors have seen come and go over the last five decades: over 50 rides have been retired or remodeled and are no longer in existence.

Miss the Scooby-Doo: Ghostblasters adventure? Or the Mo-Mo ride? What happened to them and how did Six Flags decide what gets to go where those rides used to be? There isn’t a set process for adding and removing attractions in the park, Gotway said, but there are some questions that park administrators ask themselves.

“OK, do we have a ride that isn’t as popular as it used to be? Could something else go in there that might be more popular? Do we have a ride that has, quite honestly, just outlived its useful purpose? It’s taking a lot of time, it’s taking money: Is it worth it? If it is, fine. We can keep doing it. And if it’s not, that needs to go to something else. Then we say, ‘OK, let’s take this one out.”

Six Flags staff really strive for a balance in the park, Gotway said. Adrenaline junkies are perhaps the loudest stakeholders, arguing for longer, faster, higher and more exciting roller coasters, but that isn’t fair to those who enjoy rides that spin, or dark rides, or even shows and concerts. Six Flags has hosted country music and pop music stars Dolly Parton, Reba McEntire, Garth Brooks and Plain White T’s in the past, and people lined up as early as 3 a.m. to make sure they had spots to see New Kids on the Block in the late 1980s.

Sometimes park officials utilize the features of old attractions in new ones. One of the most obvious is the trough that holds Thunder River’s coursing current and roaring rapids used to be much calmer, offering boaters an opportunity to cruise the “Mississippi River.” Visitors also can see the basin and canopy of what used to be a dolphin, and later alligator, pool in the queue line for Pandemonium. The Hall of Justice is in its fourth iteration, after previously housing Injun Joe’s Cave, Time Tunnel and Scooby-Doo: Ghostblasters.

There are some rides Gotway said have become almost untouchable because of their popularity. Batman isn’t going anywhere any time soon and neither is Screamin’ Eagle, which has developed a cult following because it was the last work of famed roller coaster designer John Allen. Allen came out of retirement to design the coaster and he did not disappoint. When the Screamin’ Eagle opened in 1976, it was the longest, fastest and highest wooden coaster in the world.

In the past, though, fans of the park had to say goodbye to even the most popular attractions, including the Mississippi Adventure ride which delighted guests for more than a decade beginning in 1971; Tom’s Twister, which opened in 1972 and was replaced by Bugs Bunny National Park attractions in 2005; and Tidal Wave, which closed during the 2019 season.

Last year the beloved Moon Cars, which resembled 1911 Cadillacs, made their last loop around an already-shortened track, which had been reduced to make room for the American Thunder roller coaster. It also had become impossible for mechanics to keep up with the cars’ breakdowns as well as spend time on other projects that needed attention.

But, people want changes, Gotway said. It’s what keeps the park exciting. If a popular ride is removed, then Six Flags will try to find a similar attraction to replace it, like how Supergirl replaced Highland Fling.

Change is the nature of the park, Gotway says. It’s needed to keep visitors engaged and gives even locals reasons to come and check out the new attractions. Evolution has given Six Flags St. Louis the stamina to be around for a half-century, and it will be the reason it stays open in the years to come.

Six Flags Over Mid-America, historical photos from 50 years ago