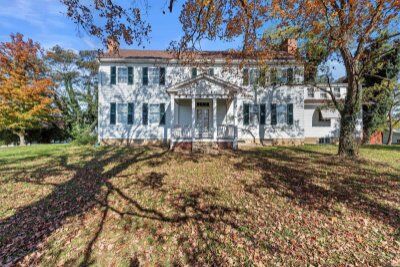 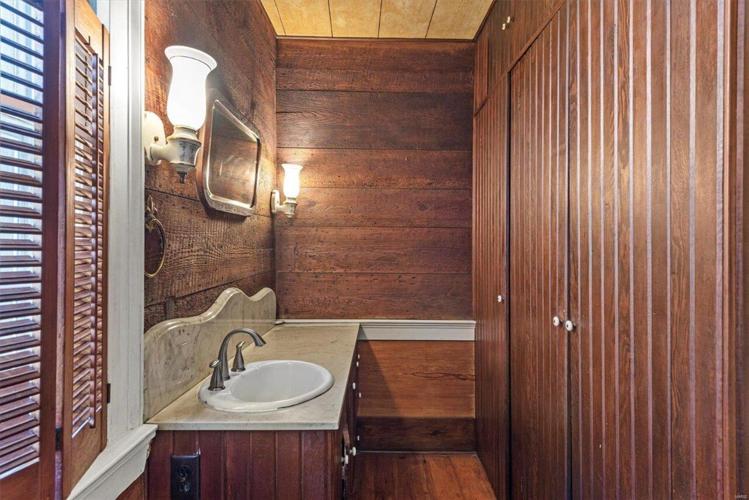 Pictured is an upstairs bathroom in the home, which did not have indoor plumbing when first built. The plumbing has recently been updated ahead of the home’s sale. 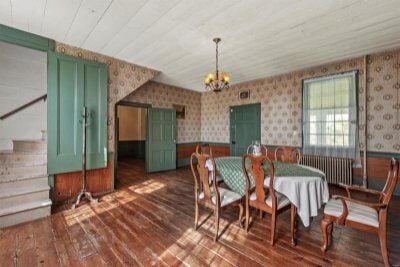 Originally used as a master bedroom by Thomas Wood, the room to the left of the breezeway has served as the house’s dining room for 100-plus years. It is shown here with its original hardwood flooring and wood plank ceiling. 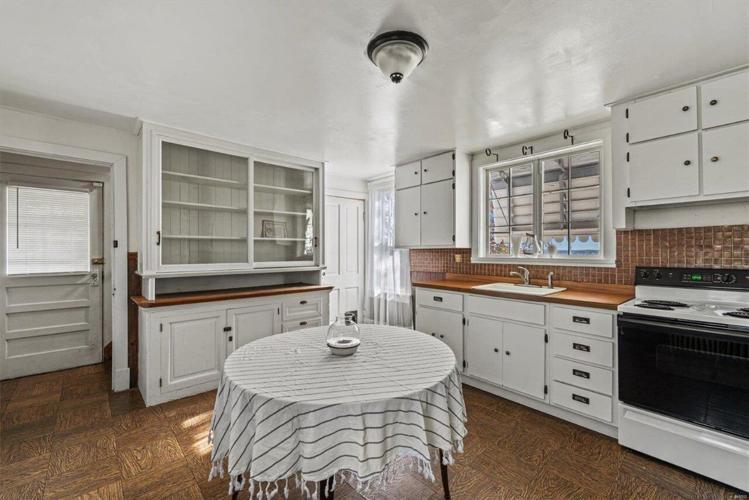 The house’s kitchen, shown above, was part of an addition made by Thomas Wood’s great-granddaughters in the mid-20th century. The appliances in the room have been updated more recently. 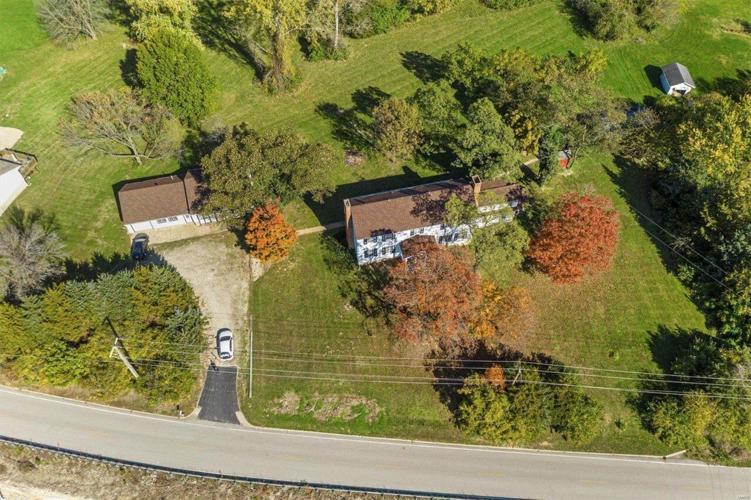 An aerial view of the Thomas Wood Home shows the two-story house and stand-alone garage. The house is situated on a 2.2 acre plot of land in Villa Ridge.

Pictured is an upstairs bathroom in the home, which did not have indoor plumbing when first built. The plumbing has recently been updated ahead of the home’s sale.

Originally used as a master bedroom by Thomas Wood, the room to the left of the breezeway has served as the house’s dining room for 100-plus years. It is shown here with its original hardwood flooring and wood plank ceiling.

The house’s kitchen, shown above, was part of an addition made by Thomas Wood’s great-granddaughters in the mid-20th century. The appliances in the room have been updated more recently.

An aerial view of the Thomas Wood Home shows the two-story house and stand-alone garage. The house is situated on a 2.2 acre plot of land in Villa Ridge.

Much has changed in the nearly five decades since 1976, the year the U.S. celebrated its bicentennial, the Apple computer company was first founded and Judith Hunt purchased a historic home at 783 Homestead Lane in Villa Ridge, moving with her then-husband and two young sons from Webster Groves to northeastern Franklin County.

But one thing that hasn’t changed much, said Hunt’s son Darin Gilley, is the features of the home. Built in 1840 by Thomas Wood, the home’s five fireplaces, original hardwood floors and green shutters are among the many features that have stood the test of time. They were what made Hunt, who earned master’s degrees in art and history at Stephen’s College and University of Missouri-St. Louis, fall in love with the home.

Now, Gilley hopes they will attract a new family of history lovers to make the home, which he is preparing to sell, their own.

“My hope is that somebody that has the same reverence for history that my mom had will buy it,” he said. “There’s so much here.”

Gilley’s real estate agent and longtime friend, Loretta Terrio, will host an open house at the home — which has an asking price of $449,900 — Sunday from 1 to 4 p.m. She and her colleagues will don different costumes of the era in which Thomas Wood resided in the house, from more simplistic day dresses to the grandiose bustle dresses associated with the late 1800s. Scones and tea in China porcelain dishes will be served.

That history starts prior to the home’s construction in 1840. Thomas Wood, who was a farmer and had been a soldier in the War of 1812, left his home in Virginia with his new wife, eight children and seven enslaved people around the late 1820s. His brother had previously settled in Saline County, just west of Boone County, and that was Wood’s desired destination, too. According to a college history paper written in 1949 by Wood’s great-great grandniece Charlotte Thompson, however, once Wood arrived at St. Louis near the beginning of winter, he felt he’d gone far enough.

The house’s walls are made of hand-hewn pine, cut from trees on the land and sawed at a mill by the farm. A cistern well was among the parts of the home built by slave labor. Bricks for the five fireplaces, basement foundation and eight columns at the back of the house were also made on the farm, according to Thompson’s history.

The front doors, made of heavy pine, were used as the home’s first temperature regulator. The doors entered into a “breezeway” that featured doors on the opposite wall as well, and both would be opened in the summer to allow a cross breeze to flow into the house. In the winter, the doors were shut, and wood was stacked in front of them to trap in heat. During the U.S. Civil War, the family offered the breezeway of the home as a resting place for wounded Confederate soldiers.

To the left of the breezeway, a small parlor was likely used to hold family funerals before funeral homes became more common. Hunt used the space as a library, storing hundreds of books on green shelves that were custom made to match the shutters outside.

Up two flights of stairs, an attic’s rafters reveal the wrought square nails used to hold together the house. Four floors below in the sublevel basement, dirt floors remain that were used to help keep perishable food items cool before refrigerators became widely used.

Thomas Wood’s son, David Wood, who was an overseer of enslaved people and at age 21 became the first deputy sheriff of Franklin County, lived on the homestead with his father until his death in 1900. His son, Mortimer Wood, then took over the homestead until passing it onto his two daughters, Agnes and Grace Jones, who were the fourth and final generation of Woods to reside in the historic home.

During their residence, Agnes and Grace Jones installed a gas heating system, two bathrooms, electricity and a modern kitchen. By 1949, all but 136 acres of the family farm had been sold. At some point, the green shutters had been taken off the windows to be stored inside.

Gilley said that when his parents bought the 2.2 acres and the house, putting the shutters back in their place was among the first things his mother did. The house had been vacant for a few years when they moved in, and several parts needed repairing. As she started working through projects, Hunt also set out to learn all she could about the home’s story. Her new neighbors, descendants of Thomas Wood who were living farther south on the family’s remaining acreage, quickly proved helpful.

“Of course, Mom being Mom, she had to go make friends with the neighbors,” Gilley said. “Lloyd Wood (a great grandson of Thomas Wood) lived on the corner of Elder (Road) and Old Highway 100, and he was almost 90 when we moved here. But he and his brother would come over all the time and talk about the house and things his family had gone through.”

For Hunt, the stories inspired her even more to preserve the home. The American author Kurt Vonnegut once wrote that a flaw in the human character is “that everybody wants to build and nobody wants to do maintenance.” However, Gilley says maintenance became one of his mother’s favorite parts of owning the home. She filled the space with antique furniture and took care of the wood and wallpaper details and the dining room’s original plank ceiling. She pulled up a recently installed linoleum floor in the kitchen and replaced it with simulated wood grain that better matched the home’s aesthetic. She repainted walls where paint had begun to chip and kept the five fireplaces clean.

Gilley’s dad opened an electric motor repair shop in the large original garage and later expanded the structure when the business grew. In a small office he built on top of the garage, the sons kept band equipment and would practice after the shop had closed for the day.

With expansions by Thomas Wood’s great-granddaughters and Gilley’s parents, the home has four bedrooms and three bathrooms and is 2,590 square feet.

In the past year,  Gilley has hired contractors to replace outdated electrical, heating and plumbing systems. He said that although the home holds many memories for him, he would rather see it inhabited now by someone who values the history like his mom did.

“Living in a house like this is different, and it’s not really my cup of tea,” he said. “It’s really a labor of love, and I hope whoever gets it really has a love for this style of house and the history.”