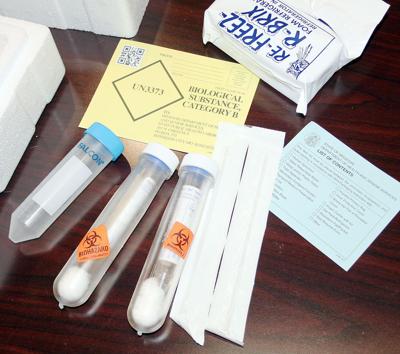 An infant from Union and a 100-year-old woman from New Haven are among the 111 people who have tested positive for COVID-19 in the past two days, according to the Franklin County Health Department.

This surge, which included 66 people testing positive on Sunday, set a record for the number of new cases in a single day.

The county also set a record on Tuesday for the number of active cases in long-term care facilities with 92 reported cases. These cases include both nursing home residents and staff members who have tested positive.

Presiding Franklin County Commissioner Tim Brinker — who serves as the public information officer for the county health department regarding the COVID-19 pandemic — wrote in an email that the health department “only gets the positive individual results, not the ‘institution’ of the residents.”

He then directed The Missourian to contact each of the county’s nursing and long-term care facilities for further information regarding the number of cases within their respective facilities.

Brinker confirmed that New Haven is seeing a surge in the number of cases, as 33 of the county’s new cases on Monday stem from the western Franklin County community. Brinker also confirmed that there are cases related to the New Haven Care Center, but did not specify how many cases.

New Haven Emergency Management Director Mike Bumgarner also confirmed that there are active COVID-19 cases in the New Haven facility, but could not confirm the number of cases.

“They have had some cases, but the center has done a great job at keeping the virus at bay overall,” Bumgarner said.

Board president at New Haven Care Center, Larry Sheer, said while he is not on the inside of the facility he “believes the care center has seen some COVID-19 cases.”

New Haven Care Center’s administrator, Dorothy Sharpe, said she has no comment at this time.

In the last week, New Haven residents — including those living within the city’s boundaries and those with New Haven ZIP codes — have accounted for more than 17 percent of the new cases reported in the county.

Brinker said contact tracing efforts are continuing in the county.

“They are behind due to caseload. We are currently reviewing an outside entity to contract with Franklin County to assist in this task,” said Brinker, who added that if a contract is signed the third-party entity could have a team “in place in the next couple of weeks.”

The death toll for Franklin County remains at 44, with a total of 14 deaths reported this month.

“That is how reporting from (the) state comes in, due to the details and reporting methods of the various enterprises,” Brinker said in an email to The Missourian.

He did not confirm how many of the 14 deaths reported this month occurred in October.

Since March, 2,746 Franklin County residents have tested positive for the virus.