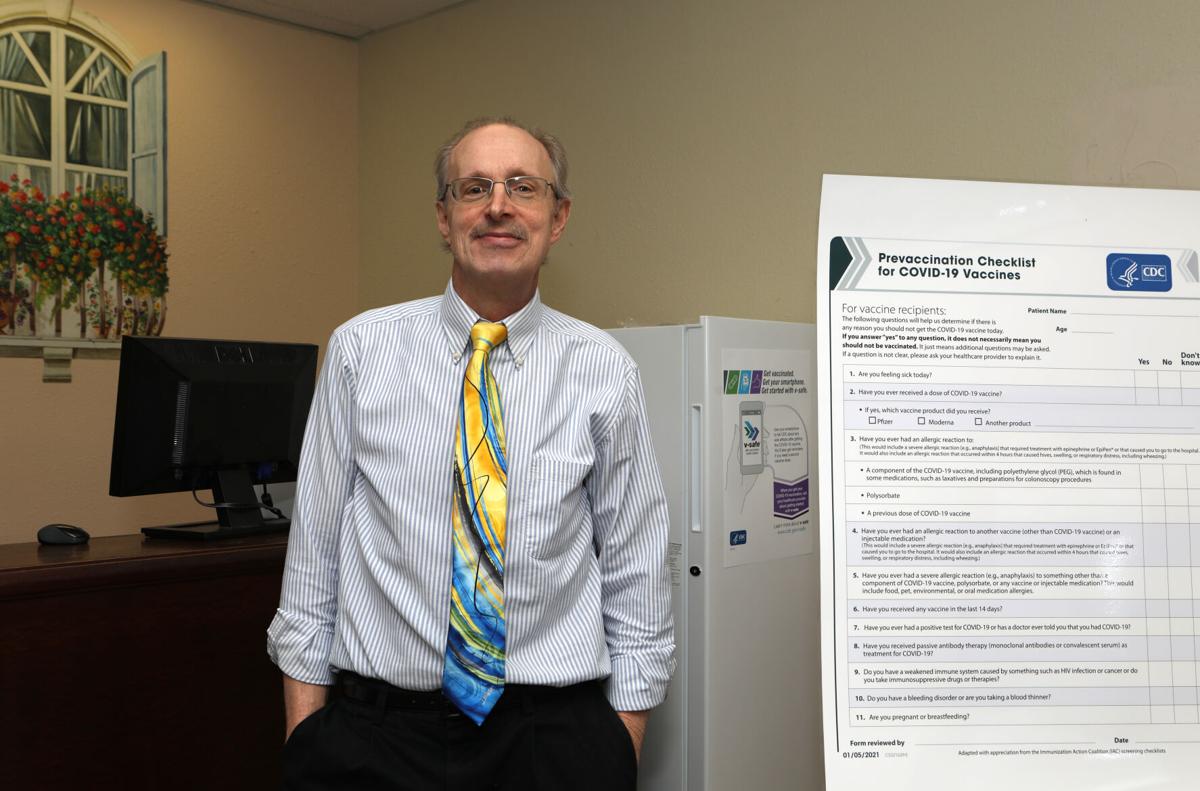 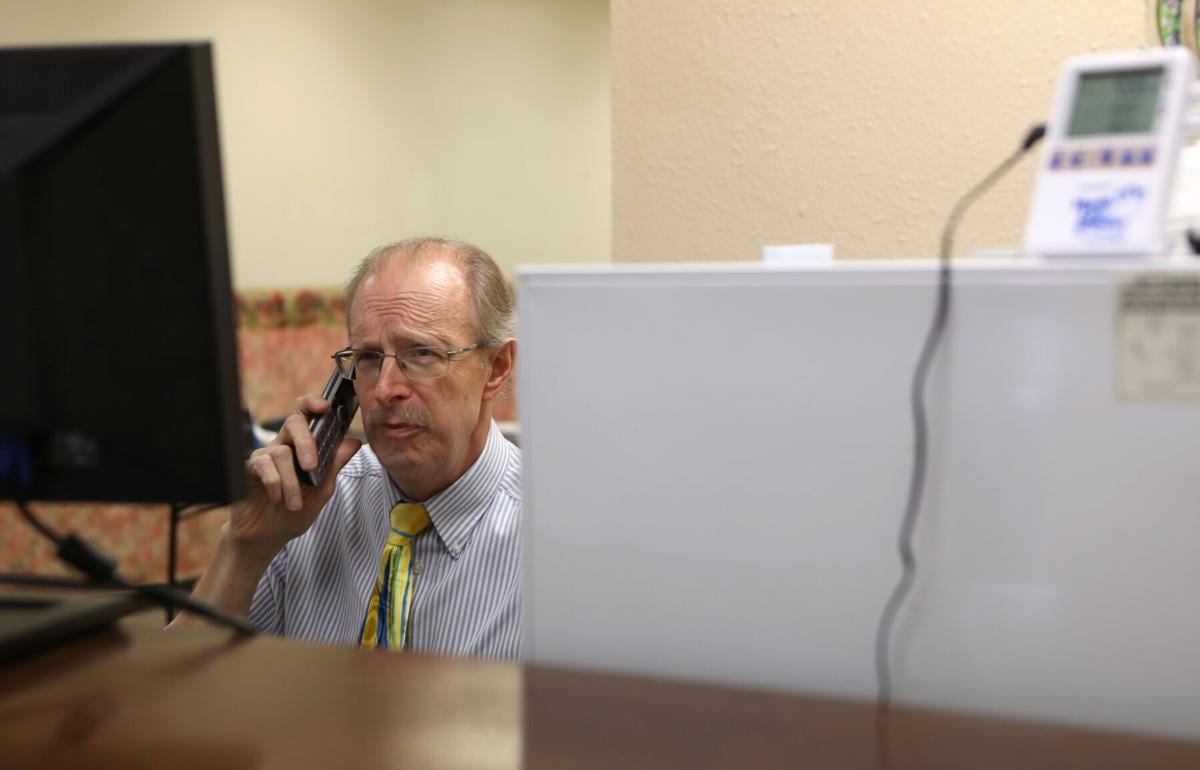 Marty Hinterlong speaks on the phone at his vaccination clinic in St. Clair Monday, Jan. 25. Hinterlong was also trying to find a software that would allow him to send out text alerts to people who had signed up to get a COVID-19 vaccine, when he was ready to distribute the vaccine. 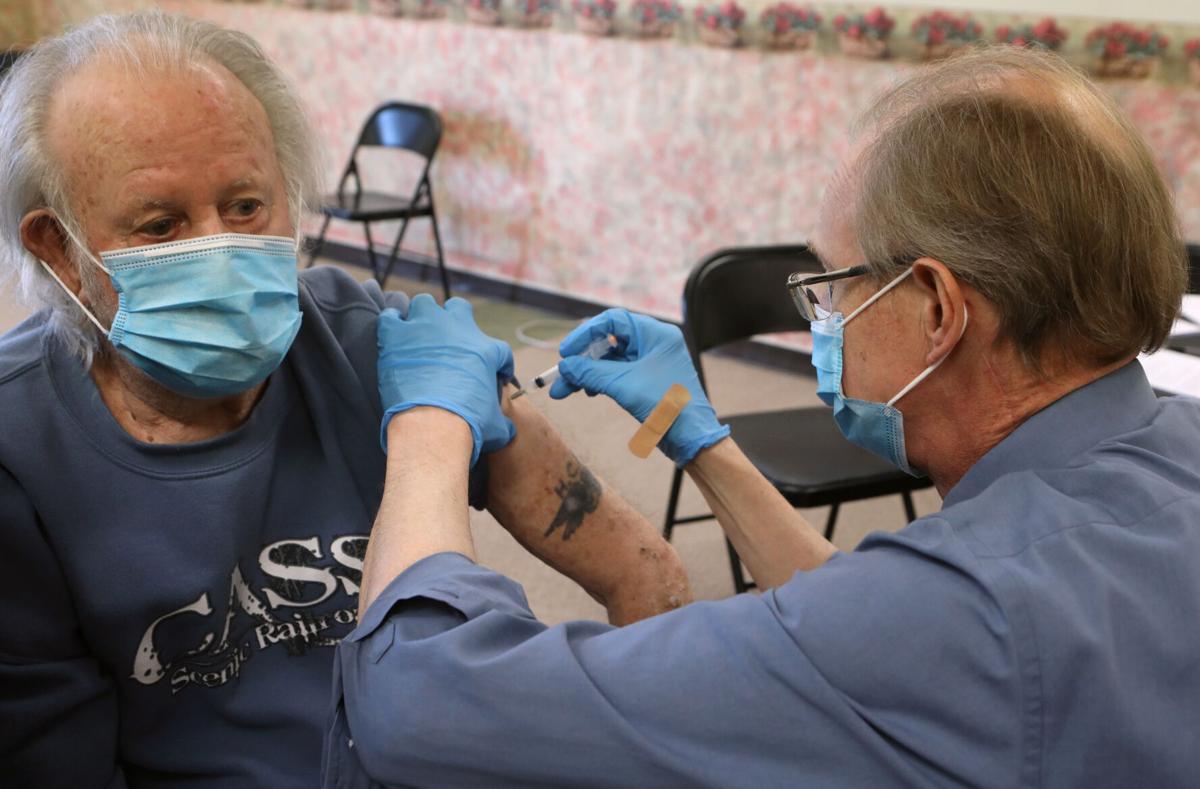 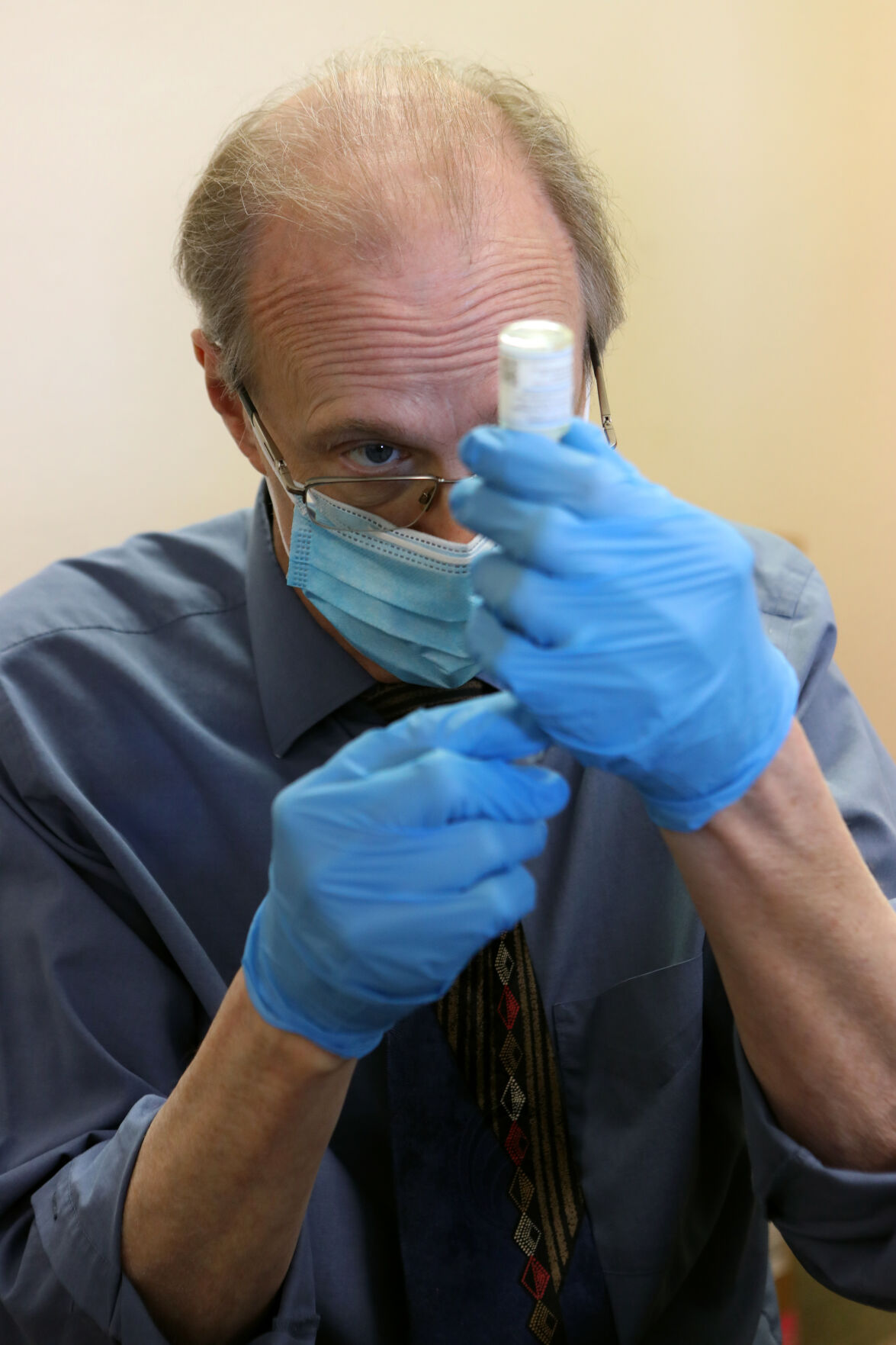 Marty Hinterlong prepares a dose of the Moderna COVID-19 at his vaccination clinic Thursday, Jan. 28 in St. Clair. Hinterlong has been a pharmacist in St. Clair for 30 years.

Marty Hinterlong speaks on the phone at his vaccination clinic in St. Clair Monday, Jan. 25. Hinterlong was also trying to find a software that would allow him to send out text alerts to people who had signed up to get a COVID-19 vaccine, when he was ready to distribute the vaccine.

Marty Hinterlong prepares a dose of the Moderna COVID-19 at his vaccination clinic Thursday, Jan. 28 in St. Clair. Hinterlong has been a pharmacist in St. Clair for 30 years.

Marty Hinterlong, St. Clair Medicine Shoppe owner and pharmacist, woke up at 3:30 a.m. Thursday, Jan. 28, to prepare for his first day of distributing the COVID-19 vaccine. About six hours later, he began immunizing patients — after waiting nearly a month to receive the vaccine from the government.

“When I opened this morning, I was shaking because it’s something new,” Hinterlong said in an interview Thursday.

His first order, 300 doses of the Moderna vaccine, arrived the day before, but Hinterlong’s shop had been set up to administer it since Jan. 4.

In less than 24 hours after receiving the shipment, Hinterlong began the distribution process.

Hinterlong expects to be able to vaccinate about 30 people per day. The process takes time because patients must sit for 15 minutes after receiving their shot, which gives the pharmacist time to monitor them for any allergic reactions.

“One lady was so excited,” assistant Cindy Gable said. “She was counting the days after her second shot to where she would be able to see her granddaughter again. I think she said the baby was six or eight weeks old last time she saw her, and now she’s like 16 months.”

With the initial delivery, the shop is automatically enrolled to receive the same size shipment of a second dose.

In addition to the first and second doses sent with this order, Hinterlong said he has signed up to receive another 300 vials, although he does not know when he will receive them. Currently, his waitlist includes 800 people.

It is a big investment, transforming the space into a vaccination site. For patients with health insurance, the shot costs $10, but those without insurance can get it for free.

Because of this, Hinterlong said he could lose a lot of money. But it’s not about that. He has invested his time, energy and money for a simple reason.

He has owned and operated the St. Clair store for three decades. He said he just wants to help the community that has welcomed him over the years.

Like Hinterlong, Pacific Medicine Shoppe owner Jerry Callahan said his shop has been fully set up to immunize residents since the start of the year, but he has yet to receive the vaccine from the government for that location.

“The key is the state,” Callahan said. “The state controls who gets it, and the request for vaccines is two to three times how much they’re getting every week.”

Independent pharmacies have not been able to receive many vaccines, both pharmacists said.

“If it had gotten in the hands of the independents along with Walgreens and CVS, we would have had a lot more people vaccinated by now,” Callahan said.

Instead, Callahan waits — alongside about 10 Medicine Shoppes in the Franklin County and St. Louis area with the infrastructure to distribute, but little to no vaccine in sight.

The Long Wait In Pacific

Hinterlong’s landlord isn’t requiring he pay rent if the store loses money as a vaccination site, he said. At the Medicine Shoppe in Pacific where that is not an option, Callahan said they are planning to distribute the vaccine in public spaces, should they receive a large shipment.

“We would probably enlist the assistance of one of the churches or a facility that has some space,” Callahan said. “Then we probably have four or five pharmacy college students helping us.”

Both Medicine Shoppe owners already have discussed working with University of Health Sciences and Pharmacy in St. Louis whose students could help administer the vaccine on a broad scale.

“We’d want to be able to do four or five people every five, 10 minutes,” Callahan said.

Callahan, a pharmacist and owner of four other Medicine Shoppes in the St. Louis area, said only one of his locations, in Elsberry, received a shipment this month.

“We got 100 doses last week,” he said. “They were spoken for within 35 minutes on Monday morning.”

People can join the St. Clair Medicine Shoppe’s vaccination waitlist by going to its website, but only people in groups 1A and 1B Tier 1 and 2 can be vaccinated at this time. Hinterlong also has a QR code available for scanning at the front of his shop, which people can use to sign up.

The Pacific Medicine Shoppe will share a calendar on its website only when, and if, a shipment arrives, on which residents would be able to schedule an appointment.

More than 6 percent of Franklin County residents have been vaccinated against COVID-19, with hundreds more receiving doses of either Pfizer’s …

4% Of Franklin County Residents Vaccinated According To State Health Department

Nearly 4,200 Franklin County residents have received the first dose of the coronavirus vaccine as of Wednesday morning, according to a new dat…