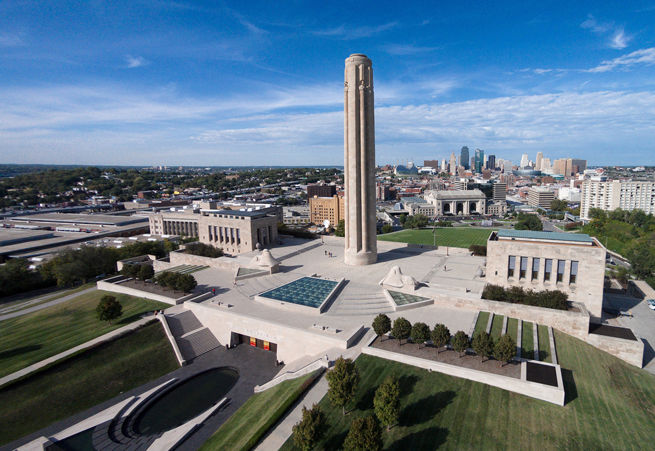 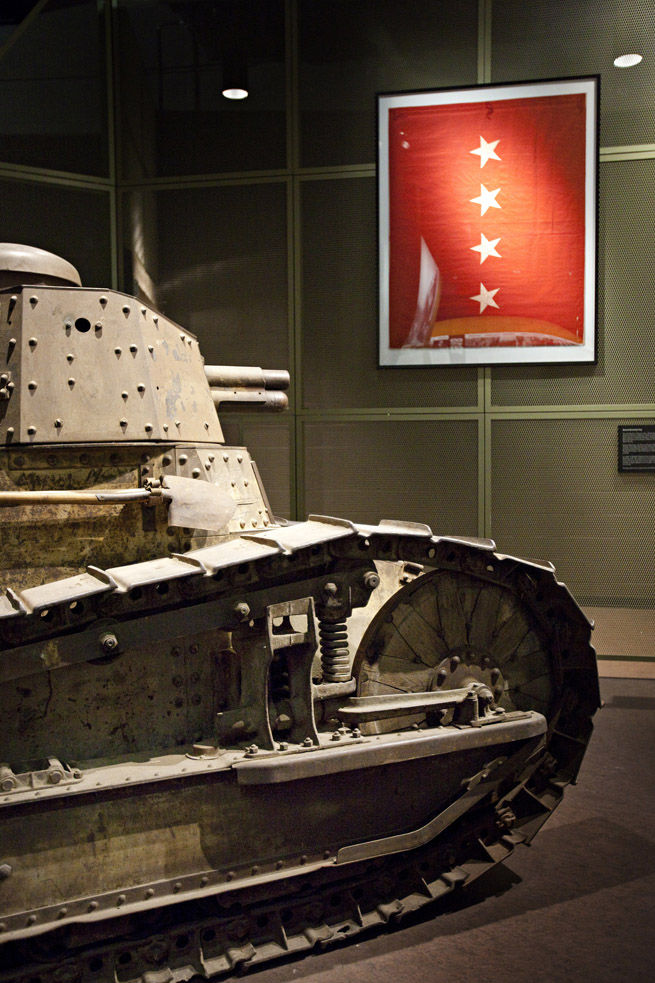 Graffiti inside this Renault FT17 tank, which saw action in WWI, includes the name of a soldier from Kansas City. The framed red flag with white stars is the headquarters flag of U.S. General John J. Pershing from his headquarters in Chaumont, France, in February 1918. (Credit: National WWI Museum & Memorial). 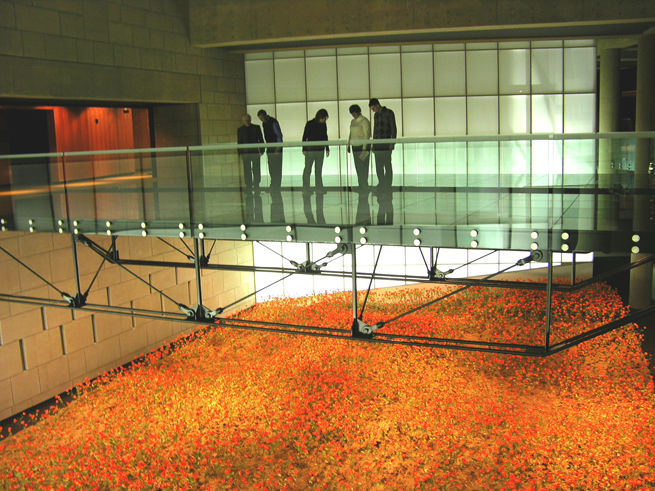 The Paul Sunderland Glass Bridge that leads to the exhibit hall passes over a field of 9,000 poppies, each representing 1,000 combatant fatalities. (Credit: National WWI Museum & Memorial).

Graffiti inside this Renault FT17 tank, which saw action in WWI, includes the name of a soldier from Kansas City. The framed red flag with white stars is the headquarters flag of U.S. General John J. Pershing from his headquarters in Chaumont, France, in February 1918. (Credit: National WWI Museum & Memorial).

The Paul Sunderland Glass Bridge that leads to the exhibit hall passes over a field of 9,000 poppies, each representing 1,000 combatant fatalities. (Credit: National WWI Museum & Memorial).

This year the United States is observing the 100th anniversary of the U.S. entry into World War I on April 6, 1917. Missourians are fortunate to have the federally designated National World War I Museum and Memorial in Kansas City. It is a national treasure within an easy drive for Missourian readers.

The Liberty Memorial Tower stands tall and proud atop a hill just south of Union Station. A winding road leads through a scenic park to the entrance of the museum. It's an impressive sight, with the tower flanked by two sphinxes and a long walkway descending into the museum below the memorial.

Prepare yourself to be moved as you travel through the museum displays, which tell both the global and the individual stories of the first war in history to involve every inhabited continent. The emotional impact begins with a glass bridge from the lobby to the exhibit hall. Below the bridge is a field of poppies, 9,000 poppies, each one representing 1,000 combatant fatalities, for the more than nine million fatalities in the "war to end all wars."

From there, the exhibits lead the visitor through a chronological history of the war, which began in Europe in 1914. The East Gallery is dedicated to the global story from 1914 to 1917, while the West Gallery focuses on the American experience in the war from 1917 to 1919. In between the galleries, a dramatic wide-screen movie helps explain the U.S. entry into the war.

The original two buildings of the memorial, on either side of the tower, now house special exhibitions and memorials. In Memory Hall, one can study the epic Pantheon de la Guerre. The largest fragment of this famous painting is installed there, with additional fragments in the research center.

A trip to the top of the 217-foot tower for a 360-degree view of Kansas City is a highlight for many visitors.

Visitors interested in an in-depth experience can spend as much time as they wish in the interactive rooms, using databases, simulations and scenarios to help them understand the why's and how's of the war. Reflection rooms provide a quiet space to listen to audio elements, from wartime music to personal recollections.

Because many visitors don't anticipate the extent of the museum, all admission tickets are good for two consecutive days so people can return for more exploration.

Shopping and dining are also part of the museum experience. The Over There Cafe has a WWI theme decor. The menu offers sandwiches, salads, daily specials and a variety of beverages, including beer and wine. The cafe is open until 3 p.m. on days the museum is open. The Museum Store bulges with WWI related books, military collectibles, vintage T-shirts, and more. All purchases are tax free and benefit the museum.

The origin of the memorial is an inspirational tale. After the war, in 1919, the citizens of Kansas City decided to honor those who had served or died in the war. In just 10 days, more than 83,000 people in the Kansas City area raised more than $2.5 million (which would be about $35 million today) for the project. The Liberty Memorial Tower opened in 1926. In 2006, the museum was expanded and redesigned, and the facility was named a National Historic Landmark.

The importance of the museum and memorial was summed up by General John J. Pershing, commander of the American Expeditionary Forces in WWI and General of the Armies, who was born in Laclede, Mo. Pershing said, "This memorial also symbolizes the obligation that rests upon present and future generations to preserve that for which those men and women offered their all, and from many of whom the supreme sacrifice was accepted. May their memory live on, and may every American who looks upon this noble edifice be inspired by their devotion."

The National World War I Museum and Memorial is at the junction of Main Street and Memorial Drive in downtown Kansas City. From Labor Day to Memorial Day, the museum is open 10 a.m. to 5 p.m. Tuesday through Sunday. From Memorial Day to Labor Day, the museum is open 10 a.m. to 5 p.m. Sunday through Friday; 9 a.m. to 5 p.m. Saturday. Admission is $14 for adults, $8 for youth ages 6 to 17, and free for children under age 6. Tickets include access to all galleries, exhibits and the tower. Parking is free. For more information, visit www.theworldwar.org or call 816-888-8100.

For information about other things to see and do in Kansas City, visit www.visitkc.com or call 800-767-7700.

(A version of this article first appeared in Show-Me Missouri Magazine, March 2017.)