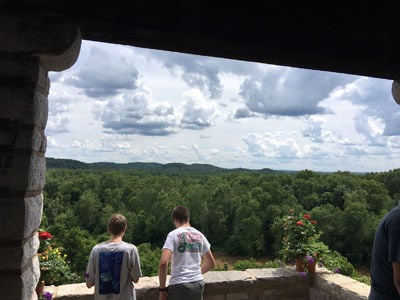 Looking out over the Meramec River from Jensen Point. 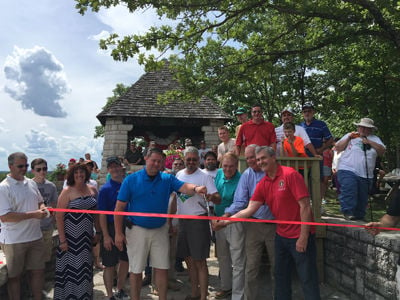 Cutting the ribbon at the grand re-opening of Jensen Point on May 30. 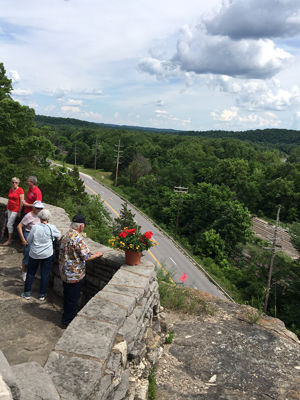 From the viewing areas at Jensen Point, one can see Historic Route 66 running alongside the Meramec River, which is muddy from recent rains. 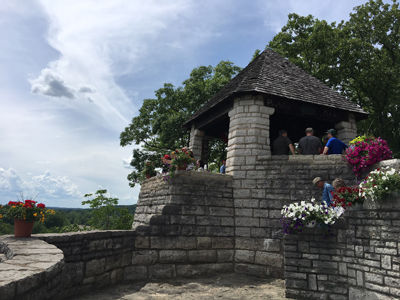 Looking out over the Meramec River from Jensen Point.

Cutting the ribbon at the grand re-opening of Jensen Point on May 30.

From the viewing areas at Jensen Point, one can see Historic Route 66 running alongside the Meramec River, which is muddy from recent rains.

Fans of Historic Route 66 and the Civilian Conservation Corps (CCC) had plenty to celebrate this past weekend when the 77-year-old Jensen Point in Pacific was re-opened to the public on Memorial Day, May 30.

The original grand opening was on Memorial Day in 1939, and the celebration started at 2 p.m., just as this year's did.

Jensen Point was a project of the Henry Shaw Gardenway Association, which promoted the route between the Missouri Botanical Garden in St. Louis and what was then called the Arboretum (today's Shaw Nature Reserve) in Gray Summit. Members of Company 1770 of the CCC, under the supervision of the National Park Service, built the hilltop stone tower, patios and steps to be a stopping point along the Gardenway and Route 66.

The point is named for Lars Peter Jensen, the first president of the Gardenway association and the manager of the Arboretum for 18 years. He was born in Denmark in 1867 and died in Gray Summit in 1941. There is a memorial plaque inside the stone tower.

The 2.8-acre site of Jensen Point is on the east side of Pacific, on East Osage Street (Historic Route 66), immediately west of the Red Cedar Inn, another Route 66 landmark, which is no longer operating as a restaurant.

In 1991, Wayne Winchester purchased the property next to his office on Osage Street; the property included Jensen Point. According to a brief history passed out at the grand re-opening, Winchester quickly fell in love with Jensen Point and helped preserve the site, which had been abused and neglected prior to his ownership.

Winchester sold Jensen Point to the City of Pacific in 2015, following months of effort on the part of Pacific Alderman Steve Myers and other volunteers and groups. With the help of Great Rivers Greenway, Pacific received a grant from St. Louis County Municipal Parks Grant Commission to help with the purchase and restoration of Jensen Point.

The landmark is now a Pacific city park and will be preserved for future generations to enjoy. There is a paved parking lot at the base of the hill. The stone steps, patios and walls have been repaired by the city, and volunteers helped clear away brush and scrub.

The Pacific River Walk Trail, a project of the non-profit Magi Foundation, seeks to establish Pacific as a "trail town," and helped support the acquisition and rehabilitation of Jensen Point. The current goal is to establish the segment of trail connecting Jensen Point to the Pacific Palisades Boat Ramp on the Meramec River. For more information about the group, which promotes walking, running, cycling and horseback riding on trails, visit www.pacificriverwalktrail.org.