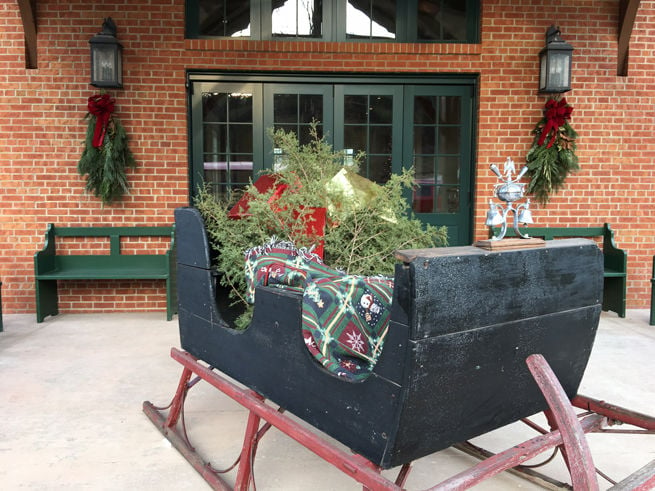 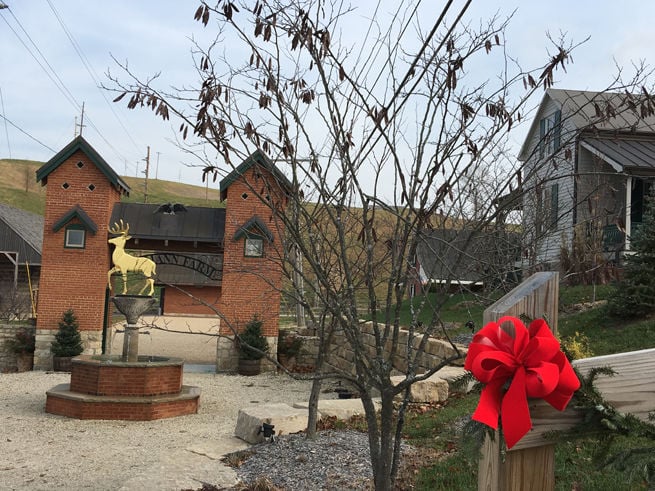 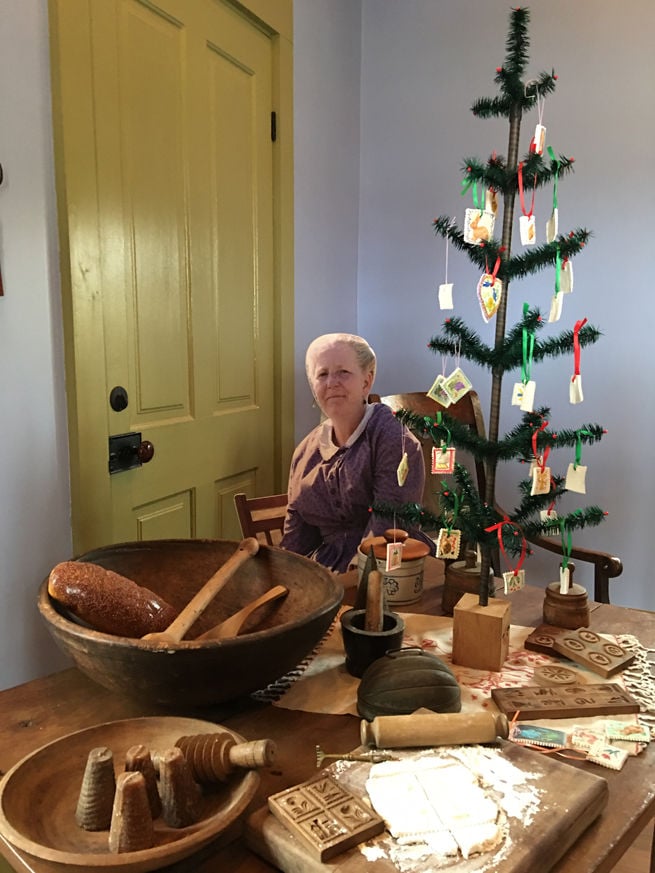 Baking is a major part of German Christmas traditions. This scene is in the kitchen of the Husmann house. 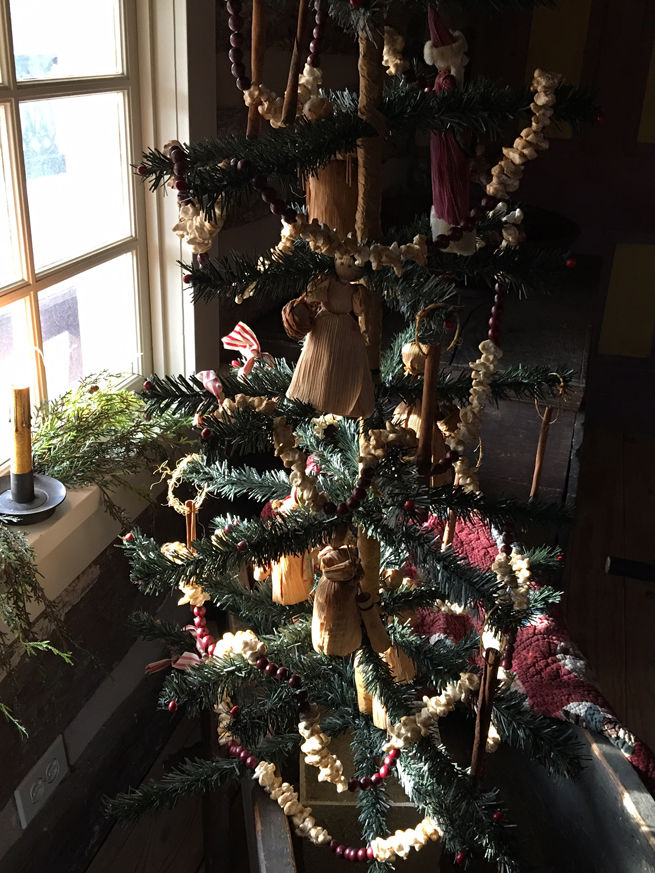 A feather tree in a log cabin homestead would have been decorated with natural items such as popcorn, cranberries, dried flowers or corn husk dolls.

Baking is a major part of German Christmas traditions. This scene is in the kitchen of the Husmann house.

A feather tree in a log cabin homestead would have been decorated with natural items such as popcorn, cranberries, dried flowers or corn husk dolls.

Take a step back in time this holiday season with a visit to Hermann Farm, a living history museum that recreates the lifestyles and traditions of the early German settlers in Missouri.

The first two weekends of December, the farm will be decked out in Old World holiday finery to welcome guests. Although a visit to the farm is a treat any time of year, the Christmas season adds an extra layer of Gemütlichkeit, a German word that conveys the idea of a feeling of warmth, friendliness and good cheer.

Chances are good that a seasonal visit to Hermann Farm will become a holiday tradition for your family.

The farm, which is the vision of benefactors Jim and Mary Dierberg, was once the home of George Husmann, who is often called the father of the Missouri wine industry. For more than a century, the farm was owned by the local Kallmeyer family, who sold it to the Dierbergs in 2006. The farm is operated by the Dierberg Educational Foundation, which is dedicated to preserving and presenting the history and heritage of the Missouri River Valley.

After 10 years of restoration and development, Hermann Farm opened to the public in 2016. Improvements and additions are ongoing, with the most recent being the opening this year of the Black Shire Distillery. There is no shortage of things to see and do at Hermann Farm.

The first stop for your visit is in the visitor center and mercantile, where you can get tour information, buy tickets and do a bit of souvenir shopping.

The mercantile is part of the First Settlement Village, which includes a 1790s frontier trading post and an 1850s log barn housing a woodwright shop, tinsmith shop and broom shop, as well as the Schuetzenhalle and the Spirit House.

The Schuetzenhalle, roughly translated the shooting hall, captures the ambience of a German sharpshooter society, with early firearms and authentic hand-painted award targets from Germany on display. At Christmas, it is decked out with feather trees adorned with hand-cut Scherenschnitte, or German paper cutting, in delicate and intricate patterns.

The Spirit House is a hospitality center, where visitors can enjoy cider and cookies while browsing through displays about German holiday customs, such as the Christkindl, or Christ Child.

The Settlement Village can be visited on a self-guided tour.

Hop on the tram

The tram tour, which is only way to visit all parts of the 200-acre farm, includes sightings of the Shire draft horses in the fields, plus stops at the Husmann home, the log cabin farmstead, the mule barn, the distillery and the graveyard high atop Kallmeyer Bluff with stunning views of the Missouri River and surrounding countryside.

The most formal residence on the farm is the Teubner-Husmann House. In 1847, Carl Teubner, a German immigrant, bought 200 acres just east of Hermann, and planted grape vines and fruit trees. He married George Husmann's sister, Josephine, later that year. When Teubner died unexpectedly in 1851, Husmann moved back to Hermann and assumed management of the nursery and winery business for Josephine. When his sister died in 1854, he became guardian of her two young sons.

Husmann, who had emigrated from Germany in 1839, operated Hermann Nurseries from 1851 to 1868. He is widely regarded as the preeminent 19th-century expert on American grapes and wine. He helped develop the grape industry in both Missouri and California.

The house has been restored to its original grandeur, with furnishings and decorations that are typical of the time period. The mid-1800s outbuildings also have been restored.

Another stop on the tram tour is the log cabin farmhouse, home of the master distiller, and the nearby Black Shire Distillery. The log cabin is furnished and decorated in a more rustic manner than the Husmann House, with natural decorations, such as dried flowers, strings of popcorn or cranberries, and cornhusk dolls.

The Black Shire Distillery, which opened this year, is part of the tram tour, but also can be reached via personal vehicle. The distillery, which is festively decorated for the holidays, is open for tastings and sales.

Other stops on the tram tour include the mule barn, with its upstairs display of tack and farming equipment. The tram pauses along the farm road to offer visitors good views of the Shire draft horses that are raised on the farm, and of Pat and Jane, the matched pair of white Missouri mules.

Throughout Hermann Farm and its various buildings, the Christmas traditions of the early German settlers are brought to life via costumed interpreters and decorations appropriate for the period and purpose.

Author's note: A version of this story appeared in the Winter 2018 issue of Show-Me Missouri magazine.