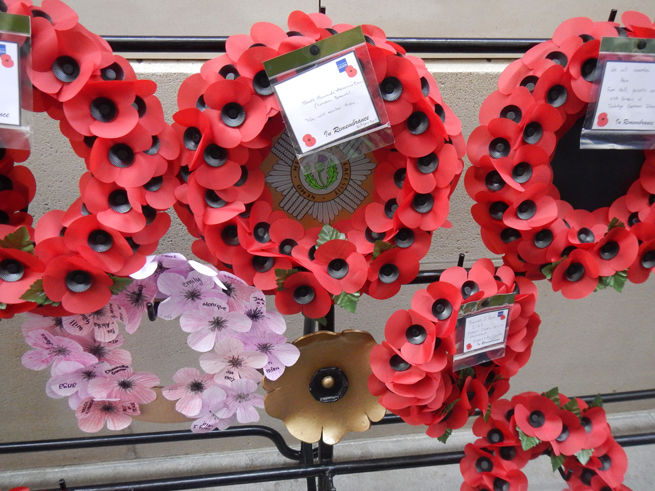 Every night during the Last Post ceremony at the Menin Gate in Ypres, people present poppy wreaths in memory of fallen soldiers from around the world. 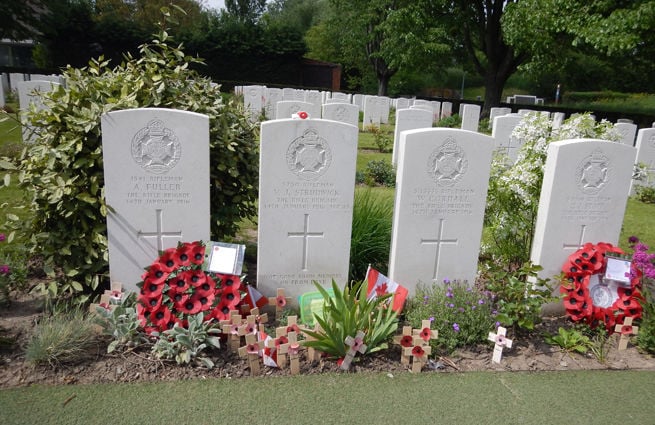 While all graves at Essex Farm Cemetery are treated with respect, many visitors pause before the tombstone (second from left) of V.J. Strudwick, a 15-year-old soldier with the Waterloo Rifle Brigade. 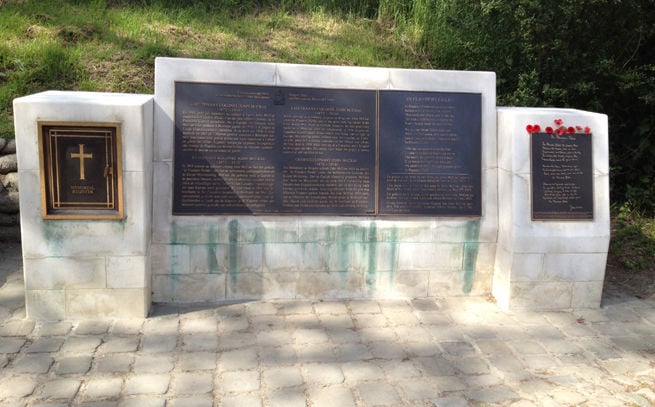 The plaques at the John McCrae Memorial Site tell the story of the writing of "In Flanders Fields."

Every night during the Last Post ceremony at the Menin Gate in Ypres, people present poppy wreaths in memory of fallen soldiers from around the world.

While all graves at Essex Farm Cemetery are treated with respect, many visitors pause before the tombstone (second from left) of V.J. Strudwick, a 15-year-old soldier with the Waterloo Rifle Brigade.

The plaques at the John McCrae Memorial Site tell the story of the writing of "In Flanders Fields."

In Flanders fields the poppies blow  Between the crosses, row on row, That mark our place; and in the sky The larks, still bravely singing, fly Scarce heard amid the guns below.  We are the Dead. Short days ago We lived, felt dawn, saw sunset glow, Loved and were loved, and now we lie In Flanders fields.  Take up our quarrel with the foe: To you from failing hands we throw The torch; be yours to hold it high. If ye break faith with us who die We shall not sleep, though poppies grow In Flanders fields.

In the devastation of the battlefields of World War I, poppies were one of the few things that would grow, and they often sprouted up around soldiers' graves.

Lt. Col. John McCrae, a Canadian physician, was working in the field medical station during the Second Battle of Ypres in May 1915. The day after the burial of his friend and fellow soldier Lt. Alexis Helmer, McCrae penned the words of the now-famous poem, "In Flanders Fields." The location is today known as the John McCrae Memorial Site at the Essex Farm Cemetery, two miles from the city of Ypres.

Legend has it that fellow soldiers retrieved the poem after a dissatisfied McCrae discarded it. It was first published in Punch, a London magazine, on Dec. 8, 1915. It become one of the most quoted poems of wartime, and led to the poppy becoming a world-wide symbol of remembrance.

World War 1 ended on Nov. 11, 1918. It was the eleventh day of the eleventh month, and it became known in the United States as Armistice Day, a day of celebration and thanksgiving meant to honor peace. This year marks the 100th anniversary of the end of the "war to end all wars."

Missourians are fortunate to have the federally designated National World War I Museum and Memorial in Kansas City. It is a national treasure within an easy drive for most of the state. (See blog post of March 31, 2017.)

Although a trip to the National World War 1 Museum in Kansas City is an enlightening and emotional experience, a trip to Flanders in Belgium will really awaken your senses to the deadly toll of war and the amazing resilience of the human spirit.

Flanders is a region in the southwestern part of the Low Countries. It is primarily the provinces of East and West Flanders in Belgium, plus parts of France and the Netherlands. During WWI, Flanders was the scene of prolonged and brutal trench warfare on the Western Front.

The medieval town of Ypres was at the heart of the battlefield, and by the end of the war, there was nothing left of the town but ruins and rubble. Today, the picturesque town is totally rebuilt, with its magnificent Cloth Hall restored to its former glory and housing the In Flanders Fields Museum, which is a must stop for any visitor.

Another must is the Last Post ceremony at Menin Gate, a moving tribute to fallen soldiers from dozens of countries. The Last Post has been sounded there at 8 p.m. every evening since 1928.

The Allied troops in Flanders included many from France and the British Commonwealth countries. Although the Americans joined the war in April 1917, it wasn't until spring of 1918 that the greatest numbers arrived in Europe, including in Flanders.

The countryside around Ypres still reveals signs of wartime. Every year, farmers and construction workers turn up human remains and unexploded shells. The dozens of war cemeteries and monuments bear silent witness to the 550,000 soldiers who perished in Flanders. The Flanders Field American Cemetery in Waregem is the only American WWI cemetery in Belgium.

Today Ypres calls itself the City of Peace. Its rituals and remembrances are part of a history lesson the world needs to heed. Meanwhile, the poppies continue to blow, between the crosses, row on row.

In Ypres, the Albion Hotel is comfortable and conveniently located; www.albionhotel.be. For suggested itineraries of WWI battle sites and cemeteries, visit www.flandersfields1418.com. For general tourism information about the country, go to www.visitflanders.com or www.visitbelgium.com.

(Author's note: In 1954, Congress changed Armistice Day to Veterans Day. Parts of this story appeared earlier in AAA Midwest Traveler and Show-Me Missouri magazines. The blog post about the National WWI Museum in Kansas City is at http://www.emissourian.com/blogs/taste_of_travel/recognizing-the-centennial-of-u-s-entry-into-wwi/article_4777b3cc-163a-11e7-8b76-0be65f92abbc.html )